Take Advantage of ‘Advancing with Apple’ 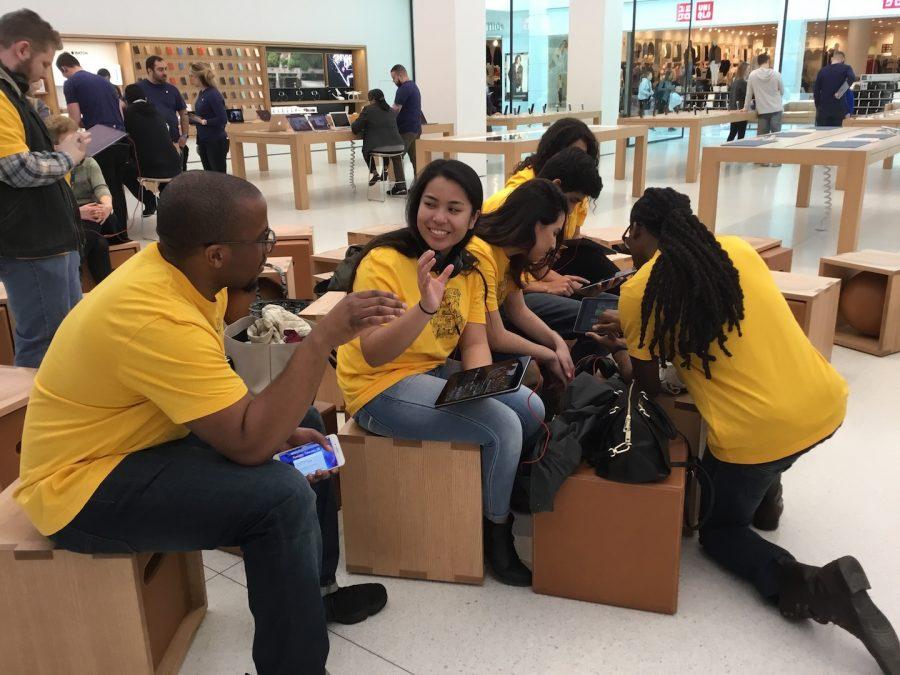 Students of Advancing with Apple work on projects assigned during field trip to Apple Store.

First piloted in Woodbridge High School for the 2015-2016 school year, the course was considered a success and approval for a district wide offering took effect. Beginning in the 2016-2017 school year, the Advancing with Apple technology course reached Colonia High School. The course offers students the ability to become familiar with Apple’s Operating System, Office Suite, and (beginner’s) Production Suite.

Far from the traditional classroom setting, students are treated to a new type of classroom experience. Apple has its own methodization of instruction of which, thankful for many, has been adopted by our school district for the course. Apple’s focus rests not on a student’s performance on a written assessment, but rather their creativity and their ability to turn that creativity into a finished product.

Students who sign up for the Advancing with Apple class need not worry about making mistakes or feeling confused. Apple celebrates mistakes and takes pride in instruction. The Apple classroom is a positive environment where negativity is an unknown concept. There is no such thing as “but” in Apple: only “and so” exists.

Shivam Patel, a student of Advancing with Apple’s Fall semester, sat down for an interview with us. He was clear to tell us that his experience was different from other classes. Patel claimed the experience to be “quite nice” and “more fun” in comparison to the Microsoft Office certification course offered at Colonia High. While Patel reasonably claimed he’d only insist his friends he knows of having interest in the field to take the course, stating it “depends on the person,” he did have fair warning to give to potential students of the course. “Have an open mind,” Patel warned. “The class is a very different experience and there’s a lot of work.”

The class is a different experience indeed. Not only for the student, but the teacher. Mrs. Karen Kenney, Colonia’s teacher of the Advancing with Apple course. This is what she had to say. “Because Apple’s focus is on exhibiting skill and creativity, I’m more of a facilitator than an instructor.” Kenney was honest to reveal that she’s shown the creativity of a student. “It really blew me out of the water,” she claimed. She has been able to see a side of students she’d never seen before. “Students I’ve had, I got to see on a completely different level.”

Kenney revealed some secrets of her experience to us. Students are given a new type of freedom in the project driven class. “I really have the freedom to allow creation,” she insisted. “It allows me to direct and guide, not ‘teach.'” She explained the Advancing with Apple classroom features a great amount of creativity and original thought. There is a level of freedom from confinement. A student isn’t glued to a seat for eighty-five minutes. Students have the opportunity to go about the school taking pictures and videos for different projects.

Completion of the course holds an advantage for students as they continue outside the classroom. Students who complete the Advancing with Apple course earn Apple’s Vanguard certification. According to Mrs. Kenney, this certification is a completion of a standard, like Microsoft Office, but with added benefits. Apple is slowly working its way into the business market. A student aspiring to work in the business world has a great advantage holding both certifications. “When you have a choice between presenting material,” Kenney claims, “Keynote is a mind blowing presentation platform.”

Students seeking out next year’s schedule have many great options. Advancing with Apple is just one more that should be on their radar.