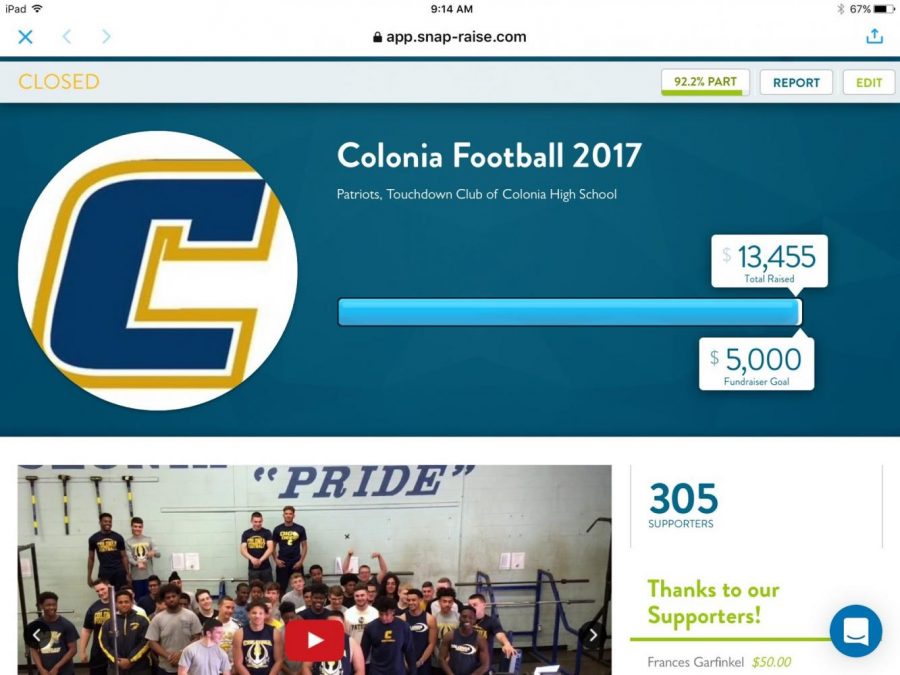 Due to the Colonia Patriots Off Season fundraiser, they are seen making $13,455.

The Colonia Football off-season fundraiser, run through SnapRaise.com, raised more money than expected. Initially, the team set a goal of $5,000 in hopes to get new weight room equipment and upgrade their technology.

When asked about participation within the football team, Junior safety, Charles Tamburello responded with, “The participation was very high, somewhere near the 90% range.”

With the participation is this high, does this lead to more donations? “Yea definitely. We ended up tremendously exceeding our goal.” Colonia was able to exceed their goal of $5,000 and almost triple it. From the Colonia Football Twitter, it can be seen the exact total raised was $13,455.

“The money has been used for new machines for the weight room such as a new leg press, a new squat machine, and an upgraded floor, also for new state of the art Hudl Sideline Cameras.”. These cameras allow the coaches to show players film immediately as the player comes off the field on their iPad’s.

Also interviewed was Junior Lineman, Jason Reyes who had high praise for Snap Raise. “Snap Raise is the best option for high schools around our area and with a sponsorship from Nike, offer the best rewards.” He continued by saying, “The more money you received, the better rewards you would get. I chose to go with the bucket hat, but the person who raised the most money on our team received brand new Beats Headphones. It was a great way to get people to go out and ask to donate.”

With the season underway, Reyes and Tamburello spoke about what the goals for the season are after starting 2-2. Both responded very optimistically. Reyes said, “The goal is to still win the White Division and to win a state championship.”

In addition, Tamburello answered with, “Being 2-2, people start to lose hope in us as a team, we will bounce back and finish the season with a winning record, and hopefully win a White Division title.”. It seems like this new equipment is helping the team as they have improved since last year. It seems like nothing will shake the players on this team laser focus.