Year in Review: A look at the Board of Education’s accomplishments in 2017 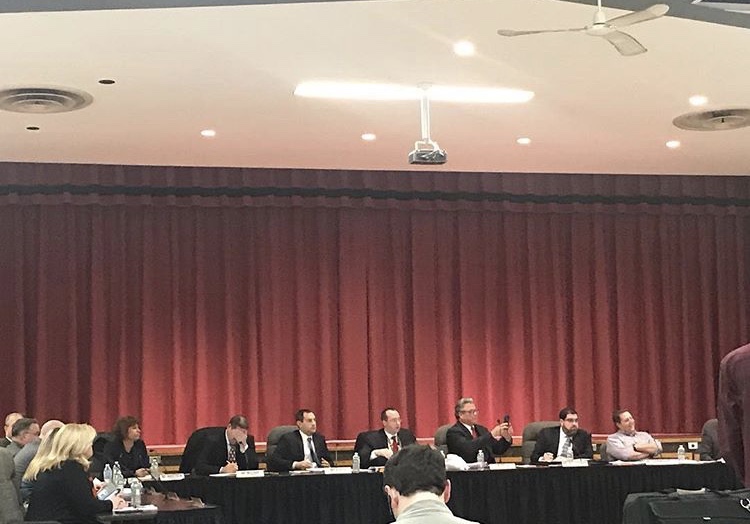 The Board of Education's final regular meeting of 2017 focused upon the year's many accomplishments.

The policy-making body responsible for the Woodbridge Township schools, the Board of Education, had a highly successful year in 2017. Multiple initiatives were passed with the intention of reforming and improving school conditions. Board President Daniel Harris spoke proudly of  his committee’s accomplishments at the final Board meeting of the year, held on December 21st.

“As is tradition, my term [as President] comes to end at the end of the year. As I have told many, the role has been the most challenging of my life. I hope my decisions and efforts- and those of my fellow board members- made a positive impact in the year 2017,” Harris prefaced his final words in the leader’s chair.

Initially, the Board’s ambitious agenda focused around the implementation of a voting referendum which took place in March. Township residents voted overwhelmingly to use budget funds for a number of repairs and renovations to neighborhood schools. Beginning next summer, construction will begin to replace the antiquated Ross Street Elementary School in Woodbridge Proper. An addition to Woodbridge Middle School will also begin in the next few months. Additionally, through this referendum, the Township will begin a new full-day kindergarten program and update all computer systems in the district.

Likewise, 2017 proved to be a more prosperous year for the district than years prior. A Township Financial Auditor spoke positively of the city’s financial position while delivering his yearly assessment.  This is due in part to numerous policies undertaken by Board members. In May, the Finance and Insurance Committee passed a low tax impact budget for operations that will remain in place for many years. Two months later, the administration successfully acquired five million dollars in supplemental state aide. Three million dollars are set aside for next year’s budget. As for the remaining balance, it is going towards a new busing system and revamped school libraries.

Colonia High School’s student representative,  Sarah Gregory updated members on the new programs she approved.  “[My responsibilities are to] present news and activities from a couple schools in Woodbridge Township to the Board,” says Gregory. Her most noteworthy briefings included speaking on the successes of three high- school newspapers and wrestling teams.

Some final works of the year included the passage of initiatives which re-introduced the popular DARE program in fifth grade classrooms. The guidance department hired two new guidance counselors who helped with the student registration process. It later amended and centralized. Payroll functions and security measures were put in place to protect students and staff.