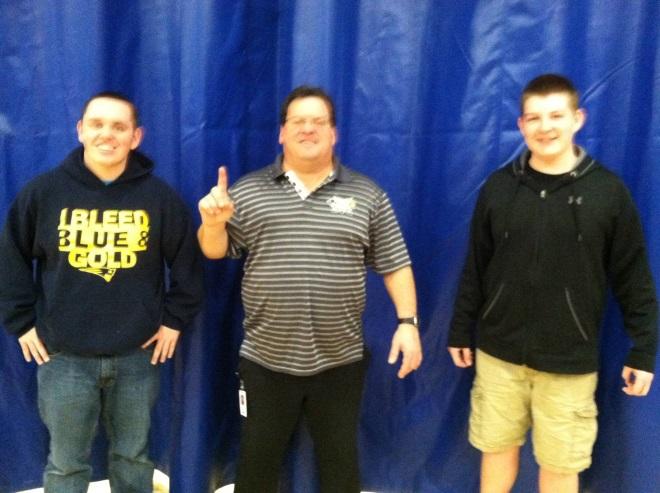 For those who do not know the sport, it involves very little; two wooden boards with legs in the back to elevate it, and a center cut hole near the top of the board. Each board is placed opposite each other at a good distance (about 27 ft. from each other to be exact). The object of the game is to get the bean bag (corn bag) into the hole for 3 points or on the board for 1 point.

The person throwing the bag stands on the side of their board and throws across to the opposite board without crossing the front of the wood next to them. Each round the scores are subtracted, if one team gets three points, and the other gets one, two points are awarded to the team who scored the three points. (3-1=2)

For more clarification on the game, the American Cornhole Association (ACA) has a website dedicated to the official rules .

Gym teacher and hockey coach, Mr. Chris Monticollo (Monti)has a few special talents; one of them is that students can’t beat him at cornhole, tennis and volleyball. Aside from his talents, Monti was named Home News Tribune’s Ice Hockey Coach of the Year in 2014.

A sophomore enrolled at Colonia High School, Andrew Fugaro stated, “Monti has beaten me six times at cornhole during the last semester.” Fugaro said, “[I am] determined to beat him.”

“Cornhole is one of the activities Monti teaches during gym,”  Fugaro brings up. This factor is obviously a game changer as Monti is playing every day that gym classes are outside whereas students like Andrew Fugaro with the AB schedule play every other day if the class even goes outdoors. Monti answered “I’ve been teaching cornhole for seven years.”

However, Mr. Monticollo’s response to this statement was “No, Bryan is lying, I never lose.”  Monticollo was asked why he has so much skill at cornhole; he answered, “It’s all in the technique. And I’m good at everything.”

Gorczyca’s response to Monti’s accusation is that Monti is the one lying. And with this there is a hint of a possible future cornhole rivalry between Gorczyca and the famous and skilled Monticollo.

Fugaro said, “I will never beat Monti.” This statement furthers the example of the devastation and impact that Monti has left on his opponents.

Gorczyca understands, “Monti has the experience and the time” and confessed, “Monti has beaten me five times.” He says this makes him feel “a little degrading.”

During his interview, Monti was asked if he had ever cheated during a game of cornhole. His answer was, “No need to cheat when you’re this good.”

With the recent Olympics, the question has been uncovered; if cornhole was an Olympic Sport would Mr. Monticollo be requested to play for the United States? The response of those interviewed is yes.  Fugaro answered “Yes, because he can consistently land on the board and “sink it.”

Another idea brought to light is– should there be a cornhole club? Students such as Gorczyca answer “definitely, as long as Monti is the head of it.” Fugaro agrees with the idea of the club, however stated, “there should be a Beat Monti club.”

You got Monti Served

Along with cornhole,  Monticollo teaches tennis at Colonia High School. Many students in the school’s history have attempted to return the famous “Monti Serve”, and many have been unsuccessful.

Along with the few who have accomplished this milestone at Colonia High School, Gorczyca has had the honors of returning this serve, and was rewarded for it by the great Monti. “I returned it once, and I didn’t have to run that day,” said Gorczyca after he was asked.

For 5 years Mr. Monticollo coached the Colonia boys’ volleyball team. With the 2013 season as his last he stated that his 2009 varsity team was the best team he has ever coached. The team included Eric Hoffman and Tim Valente.

During his last season, Monti stated, “I never miss a serve.” Although it is a known fact that Monti rarely misses a serve in practice, there are a few who have seen him “choke” while attempting the serve. When he was asked about this he did not deny it, but quickly answered: “It was a very windy day in the gym.” The “Monti Serve” is a sure thing in both Volleyball and Tennis.

Experiencing this season as a spectator, Mr. Monticollo says “I miss it; I miss the team.”

The 2014 season is now under way with their new coach Drew Biri. With the new coach Mr. Monticollo thinks “he’ll do fine” for the season.

This year the team has a lack of height that will serve as a disadvantage during the season. The limitation of hitters will make the Boys’ Volleyball season that much harder, but with “pre-season” scrimmages still taking place it may be too early to tell.