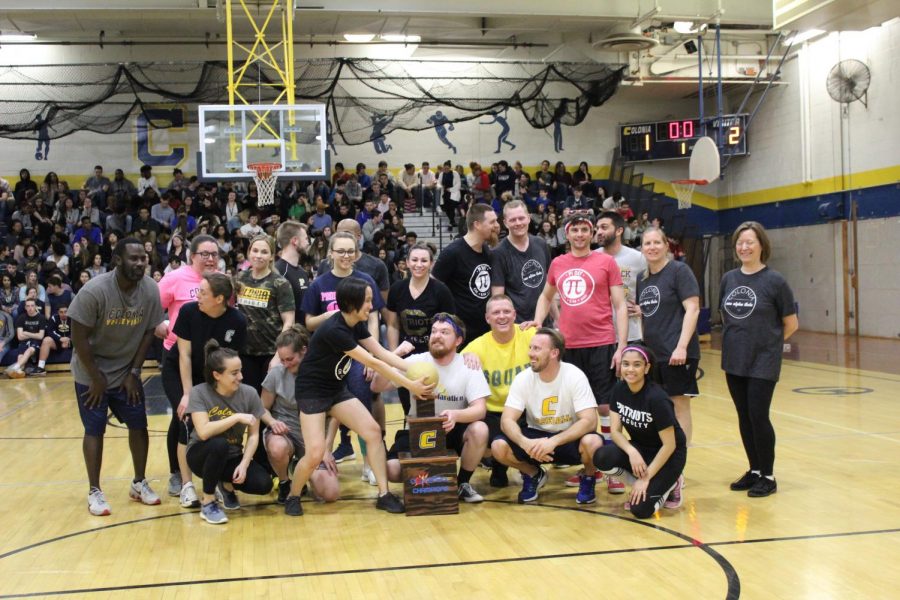 After a hard-fought match, the teachers of both sides come together with the trophy

On Thursday March 29, Team World  took down a tough down opponent in Team S.T.E.M  in dodgeball. Fans cheered loudly for their favorite teachers as the battled it out to raise money for math and English scholarships. This is the third year the two departments have faced off. For the past two years, the Math department was victorious in both best of three games.

Especially relevant, the game took a new spin this year, as departments joined forces to add more excitement to the English- Math rivalry.  Team World was made up by English, social studies, art, gym and music teachers and Team S.T.E.M  being mainly Math and Science.  Thus, this year’s dodgeball game was named S.T.E.M. vs the World. Coaching the World team from the side lines was Mrs. DiChiara while the S.T.E.M’s coach, Mrs. Ligori amped up her team but didn’t play this year.

No time was wasted getting to the action, fans cheered as both sides rushed to grab balls.   Team World dominated their first game, stunning both fans and Team S.T.E.M.  Newcomer Mr. Briggs added  much needed power to Team World, making himself a crowd favorite. However Team S.T.E.M had a answer,  playing a true lights out second game. Being lead by a number of talented players, most notably crowd favorite Mr. Hall, Team S.T.E.M proved why they were the defending champs.

In the end however, Team World would be lifting the trophy after winning game three. Once again Mr. Briggs, student teacher, proved to be a game changer for Team World, along with the help of Mr. Perdoni, band director. Team World Captains Mr. Hutch and Mr. Long wasted no time in claiming the trophy from Team S.T.E.M Captain Mr. Tufts.

Team World Captain Mr. Long, wasted no time thanking his teammates for their efforts and even went on to state, “My strategy was to take the hits for my teammates, because each time I was hit a better thrower was throwing the ball.”

Being kept from victory for several years, Team World was full of many emotions.  Therefore, Mr. Hutch went on to state, ” It’s as if I was floating on a cloud of winning and below was a shower of Math department tears.”

The Math department has no reason to be upset, as they played a good game.  All of Team S.T.E.M’s members are hungry to reclaim the title next year. However, the rumor on the street is this might have been the last dodgeball game between these two groups.