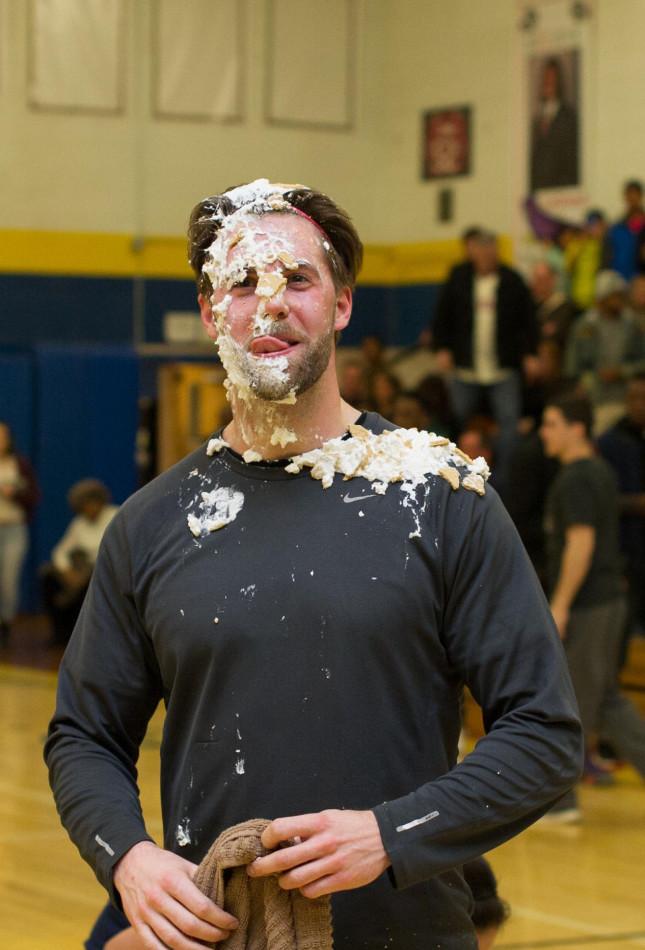 The aftermath of Mr. Biri getting pied in the face

March Madness: A single basketball game held annually. This year held on March 26th, the fun and friendly game was taken to a whole new level. The court became a battlefield plastered with pie.

During halftime of this year’s game, a new tradition was started: students of CHS were able to vote for a teacher to get pied. During the week, Friday, Monday and Tuesday, students of all grades were able to vote during lunches by putting their extra change into a teacher’s designated box. Then, the top five teachers, who raised the most money, were to await their fate until halftime.

During the first half of March Madness, spectators were able to put all last minute change into designed boxes for each member; the boxes were located in the lobby.

However, there was a rumor that Mr. LaSala had tried to cheat. Multiple sources saw LaSala remove all of the dollar bills and coins from his box and throw them into Biri’s box. A couple girls from the basketball team then removed the change in Biri’s box and moved it back to LaSala’s when he was not looking.

When LaSala was confronted about this rumor, all his explanation was simple, “It is not true whatsoever. I plead the fifth.”

After all of the money was counted, it was time for the pie. The finalists were lined up in the center of the court and told to put googles on. Christine Kim, senior, then stood behind the faculty holding what looked like, a whipped cream pie, and the crowd went wild. On the count of three, Kim reached over and smacked Biri right in the face.

Since the faculty extended their winning streak, and now have a 3peat, it was the seniors way to get their revenge by pieing the faculty’s star player.  While the crowd was unclear what type of pie was smashed, Biri did not have an answer either. He explained, “[I] did not taste it because I do not eat unhealthy food and I gave up deserts for lent.”

When asked about how he felt about the ordeal, Biri had to this explain, “From what students were saying, I thought the only real competition was between LaSala and I.” When questioned on why he thought he was the chosen one for the pie he exclaimed that “Because of my hair, appearance, and personality. Students love to hate me.”

All of the money that was raised was given to Biri’s History Honor Society in order to fund their trip to Washington D.C.