“The Incredibles 2”: A look at the long awaited Pixar Sequel that is breaking box office records

Picking up just where it left off, "The Incredibles" sequel has made huge waves in theaters. 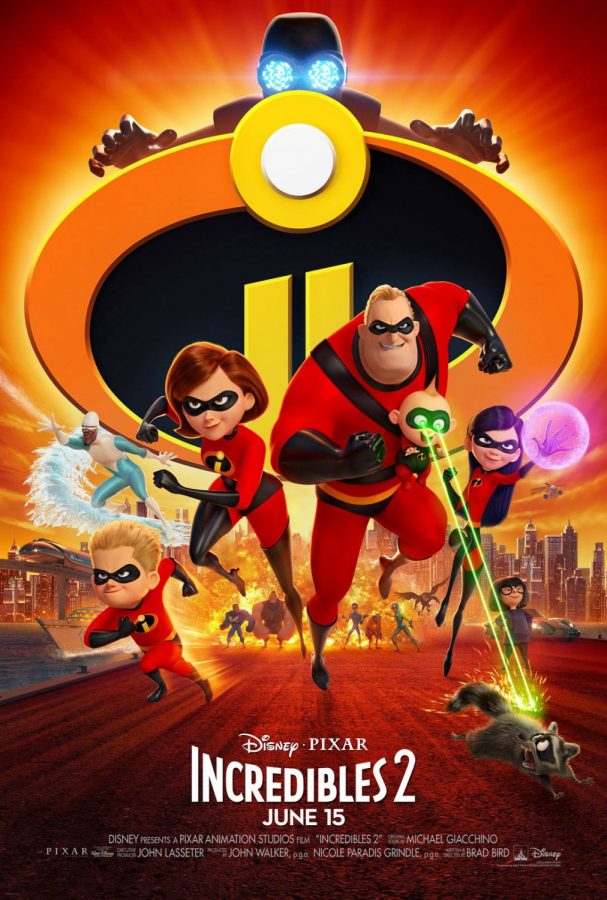 Overview
Since the Parr family left us hanging 14 years back, The Incredibles 2 has managed to captivate both the youth and young adults. When a mole-like super-villain by the name of “Underminer” attacks their city, the family of superheroes iconically prepare for battle.

After the long awaited clash, the family is awarded with bad news. The government program that previously worked to hide their super-identities was now being cancelled. As a result, their was nothing to protect the family’s identity or prosperity. In addition, this prevents them from doing anything heroic. Already unemployed, Mr. Incredible and Elastigirl, more colloquially known as Bob and Helen Parr (Craig T. Nelson and Holly Hunter) seem to have no hope.

To their surprise, however, rich entrepreneur siblings Winston and Evelyn Deavor (Bob Odenkirk and Catherine Keene) present an offer. In an effort to restore the heroes’ prosperity, they formulate a campaign. All they ask is the Parrs’ consent–with a catch.

The Deavor siblings inform the family that in order for the campaign to be finalized, Elastigirl must leave the “clumsy” Mr. Incredible behind and be their poster girl. Though it seems a bit fishy, it is also their only option for the rekindling of their success.

Reluctantly, Helen takes the job and Bob takes the role of “Mr. Mom”. Struggling to raise their three kids, Violet (Sarah Vowell), Dash (Huck Milner), and baby Jack-Jack, Bob goes on an action-packed adventure, and takes Mr. Incredible with him.
The Heroes
Of course, the most memorable part of either film couldn’t be left out of this review.

The characters of The Incredibles 2 are part  what makes the film so incredibly lasting. To begin with, the kids of the movie make it even more so exciting.

Violet continues to be a moody, hormonal teenager with a prospect of nothing more than exactly what it is she wants at the moment. Her dark, brooding personality adds a relatable adolescent touch.

Dash, with his sarcastic personality, remains a comic force in the movie. As for Jack-Jack, the film looks at his own self discovery as he explores his options in super powers.

In addition, characters like Frozone (Samuel L. Jackson) and Edna Mode (Brad Bird) make a comeback.
Why You Should Watch It
For old time’s sake, this is the movie to watch this summer. Whether you’re 4 or 24, seeing this animation in theaters will be sure to bring the child out of you.