Colonia’s Juggernauts add another trophy to their resume 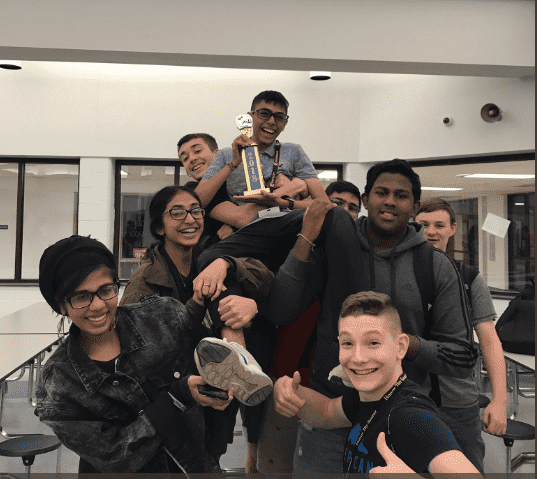 Photo by Mr. Long from the Juggernauts team used with permission.

To celebrate their second place victory, the Juggernauts are celebrating with a group selfie, to assure everyone that they are ready for the upcoming season.

The Colonia High School’s Juggernauts team came second place at their competition in Colts Neck. Not only did they ensure a win, but the Patriots have also won hearts at home. The fellow Patriots could not have been more proud as well as their adviser.

Juggernauts is a club for students at Colonia High School who are interested in an academically challenging jeopardy-style game. Four people compete at once for each of the two teams. The categories range from mathematics, grammar, history, science, and the arts, all the way to religion, foreign languages, and even AP Biology. There is a twist to it though. No one knows what the categories are, until just solitary seconds before the competition begins. Therefore, there is no way to study for the competition in advance, and your best bet is to have a wide range of knowledge on various topics.

The Patriots went to Colts Neck High School last week and won second place out of over 30 schools. The competition was open to the finest and brightest schools in NJ. With a victory, it ensures Colonia’s name in the record books.

To recognize the accomplishment, The Woodbridge Township School District has also changed their cover photo on Facebook and their website to the photo of the Juggernauts’ students. This year The Juggernauts had a new adviser, English teacher Mr. Long. However, the students of Colonia High School did not let that get in the way of accomplishing more goals and reaching more fame.
Looking forward to the upcoming season
As the team looks forward to another competition in the upcoming fortnight, they are preparing hard in advance and hope to win an unprecedented two times in under a month. Mr. Long is confident in his team and believes that the Juggernauts can accomplish any task once they put their mind to it. During the upcoming weeks, the team looks forward to another victory, to reassert their dominance. The students are excited and cannot wait for the next competitions, especially JFK. “JFK is going to be fun, especially because there’s a rivalry in the township,”  Varsity Captain Kush Shah stated. “It will be a challenge, but our goal is to win in our own township too, just like we did in Colts Neck.”

Colonia High School also hosts a competition themselves, in the Spring. Last school year, the event had a great turnout, and Mr. Long hopes to do the same again. With Mr. Pace’s approval, the Juggernauts will host another tournament this year. But for now, the team must focus their attention on their upcoming competition, on Monday, November 12. Two teams have already been chosen to compete at JFK. Captain Kush Shah and Fatima are ready to lead their team to yet another victory.