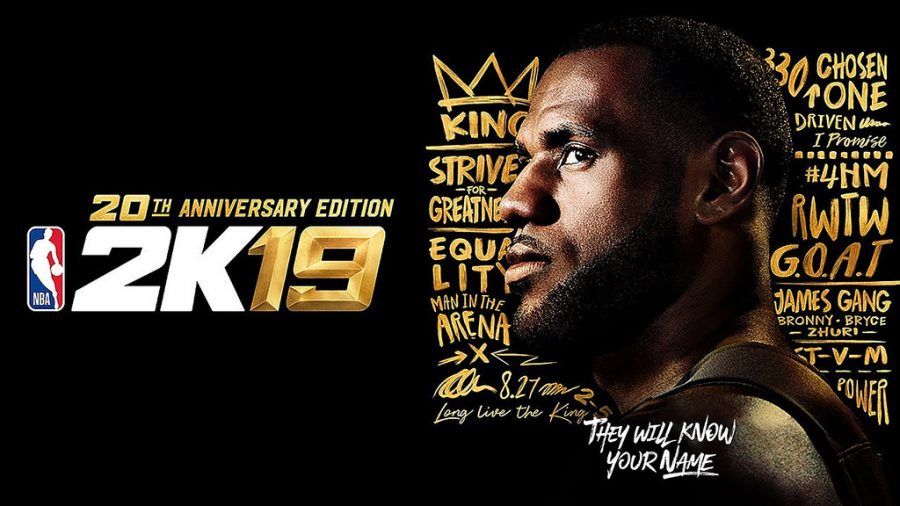 NBA 2K is a basketball simulation video game of the National Basketball Association (NBA), and the 2k19 edition is the most recent one with all of the new rookies and off-season changes already downloaded into the game… but how good is it?

The my career story is much more entertaining than it’s been in years past. They added a feature that allows you to skip cut scenes, so you can skip scenes you feel are a bit boring. That makes the game experience much more enjoyable. NBA 2k YouTuber DOM agrees with me, saying “This one is at least bearable and a little bit interesting, might I say.” They made the neighborhood much easier to navigate this year. This is where the player goes to get to things like the barber shop, or clothes stores.  The playground is basically the same as it was last year. The playground is where you play with or against friends in a street ball game.

The soundtrack for this game is always one of the biggest components as it plays whenever you are not in a game. The soundtrack this year was made by rapper Travis Scott. The best three songs in my opinion are, in order of three to one are, “Finesse” by Bruno Mars ft. Cardi B, “Win” by Jay Rock and “Last of the Real Ones” by Fall Out Boy. The only major complaint with the soundtrack is the lack of old school music.

My league is a mode where you take control of a team or even multiple teams. This year they added historic draft classes. The main issue is that only the big name players or players currently in the league are in the game. One good thing they added is the ability to put trades on pending so you can think about them, and not lose the trade. They added a new feature called player mentorship, where you get to assign a veteran player to mentor a young player. I’m actually glad they didn’t make it overpowering, because that could have broken the game.

There are two different versions of myGM: The saga continues or just traditional myGM. The saga continues is supposed to give you an entertaining story. Honestly, it fails in that. Since it’s The saga continues, you will have had to play the 2k18 story. The story is that you get to build an expansion from the ground up. The story this year is pretty dull, so basically you are sacrificing customization for a mediocre story.

MyTeam is a mode where you buy cards that you can put up against other my team players. The biggest complaint about this mode is usually that it feels like it’s pay to play. They did try to tackle that problem this year, by adding triple threat and my team unlimited. These are modes that allow you to earn cards and other rewards instead of buying them. Despite their efforts, this mode is still heavily reliant on you actually purchasing VC, the game’s virtual currency.

Play now online is a mode that allows you to play NBA style games with friends or random people. This mode, while still fun has actually received a downgrade from last year. First and main problems is that they limit the amount of times you pause. They used to only limit your total pause time to 2 minutes, with no restrictions on how many times you paused, which was better. They also made it so you can’t see your opponent’s jersey, which means you and your opponent can wear the same color jersey, which makes it hard to tell who you are passing to.

The last thing I will talk about is game play. There are no real game breaking moves or glitches. The main problem with last years games was the turnovers. The simplest move by an offensive player and the defender would end up with the ball. This year stealing the ball is not that easy, requiring some actual talent and timing. The only real complaint I can see with the game play is that it can sometimes be difficult to drive to the rim, and some people may find it discouraging.