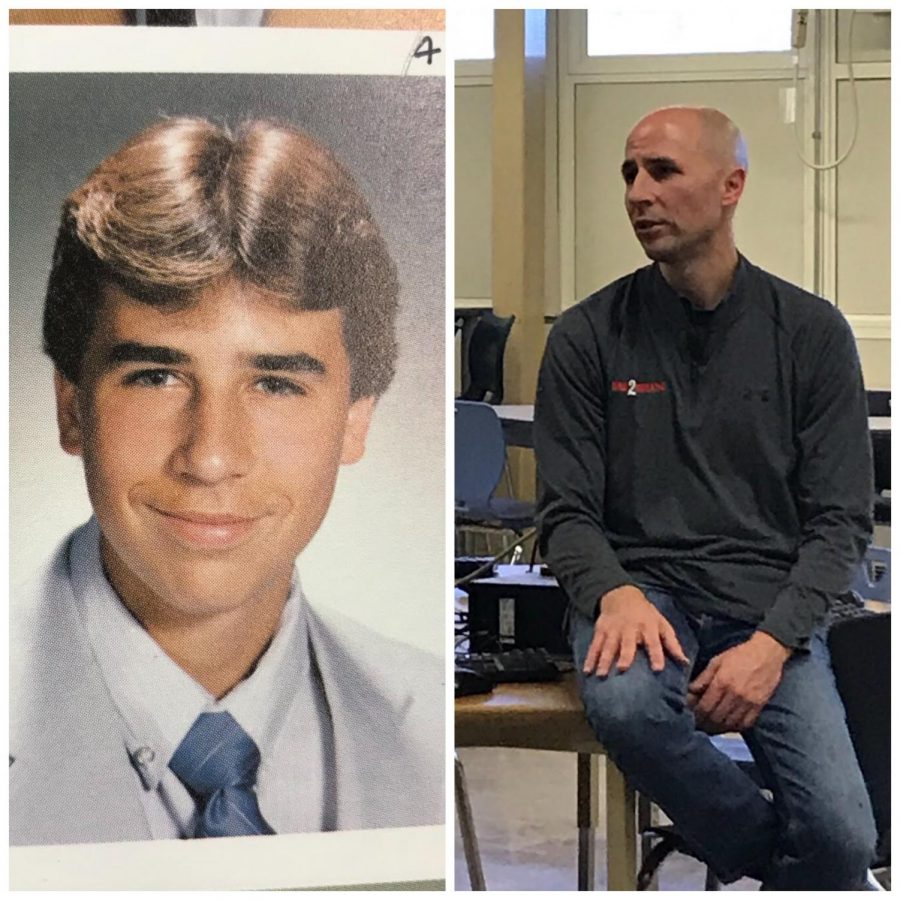 It has been a little over 30 years since Al Dukes walked the halls of CHS (left) to where he is now (right).

The excitement was high as Al Dukes made his return back to Colonia High School(CHS). Dukes spoke to students about his high school experience, college paths for a career in radio and his adventures with a career in radio.

Al Dukes graduated CHS in 1987 and since then he has made his mark all over. After leaving East Street for the final time, Dukes took out for a career in radio and the media industry. Most recently, Dukes has been working for CBS and WFAN radio as the producer of the popular Boomer and Gio Show every morning. However, while Dukes did not start out at such a popular show he always knew it was the end goal. “When I drove to school each morning, I would listen to Howard Stern on the radio and thought that’s something I would be interested in doing.” While Dukes himself isn’t one for all the spotlights, he knew behind the scenes was where he wanted to be.

However, coming out of high school Dukes was unaware that any such career could be found at a college campus. ” I was watching the David Letterman show while at Middlesex (County College), and he pulled some guy out of the audience and asked him what 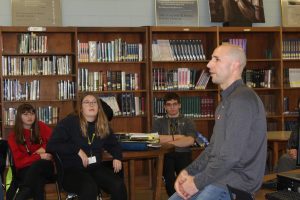 his Major was. The guy said Radio and Television and I knew this could be what I go through College with.” After spending only a year at Middlesex, Dukes transferred over to Kean University and began his journey into the media world. Dukes first looked into New York for job opportunities but didn’t have any luck. “New York is the most competitive market in this field, and I just had no experience starting out.”

Dukes’ counselor at Kean recommended that he should go to Graduate School. After getting his masters at Indiana State University, Dukes went down to Florida to start his media career. “Florida was a good place to start as the market wasn’t as competitive.  “The cost of living was also cheaper too, which  helped with the lower pay that you start with.” While Duke’s was finally working in his desired career, he still dreamed of coming back home. After seven years down in Florida Dukes made his way to New York to work on the big stage. Once in the Big Apple, Dukes made his way onto K-Rock which he grew up listening to.

While Dukes had come full circle with his career, their was till more to achieve. Dukes has been working at CBS for 17 years, and producing the Boomer and Gio Show for the past 11 to 12 years. However, success doesn’t come without a price and that price lots of hours to sleep. ” I know my hours seem terrible now, but these are the real marquee hours in this business. Six to ten A.M. is when everyone is driving to school, going to work, or sitting in traffic.”  So, while getting up at 2:3o in the morning isn’t a highlight of Duke’s journey, he still enjoys what he’s doing.

While the hours aren’t great it’s clear that Dukes still finds time for fun during the work day. “Some of the most exciting times are getting to meet sports celebrities I grew up watching. I was big Mets fan so getting to meet guys from their 1986 World Series team is a blast.” Dukes also seemed just thrilled to touch on the process of screening calls for the show. “Oh my god, brutal, it’s absolutely brutal. Only a small percent of the listeners call the show, but those who call do it all the time. We get guys who call like 15,000 times.”  While Dukes made it clear that screening calls was his least favorite part of the job, he still had a smile on his face. ” I got guys who have called us every day for six months, I have never picked it up! What are they calling for!” 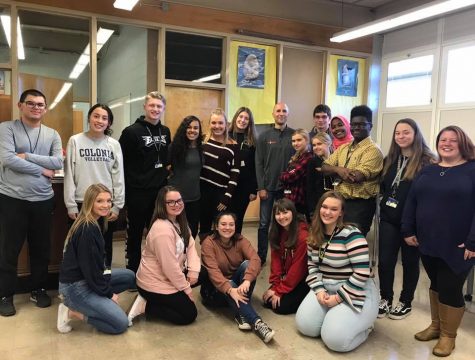 Dukes also noted one of his favorite encounters on the show. “Oh it has to be Hulk Hogan, when he walked in he just was Hulk Hogan. The guy just had an aura around him with the red bandanna and a bright red shirt that said Hulk Hogan on it. Mike Tyson was another cool one as well.”

Before leaving, Dukes left the students with some advice about going into a radio career. “The important thing I always say is to do internships. A lot of times, in this field, it doesn’t always matter where you go to college but what you do there.” Dukes also laid out his recommendations when looking for a college in this field. “You want to find a college that is more hands on and less theory based. That hands on experience is very helpful to have when moving into a full-time job.”

Journalism teacher, Danielle Allen reached out to Dukes to invite him back to CHS. Her husband, a loyal listener of The Boomer and Gio Show, informed her of the Dukes/Colonia connection.  Dukes quickly responded to her Twitter direct message with “Would love to. Would be cool to go back (to Colonia High). Have not been back in the halls since 1987.”

Allen tries to get people in the communications field to come in to teach the class. With Broadcast Journalism being a new course at CHS, Allen was in search of a podcaster to explain college and career options. Allen noted, “I don’t think this will be the last time Al Dukes is at CHS. After he spoke with my students, we began making plans for Al to talk to my future journalism classes.”  Allen greatly appreciated the time Dukes took out of his hectic schedule to speak with her students.

Al Dukes’ return to Colonia was definitely one of the highlights of the year.  Dukes is a great example of just how much can be achieved coming out of Colonia High School.