thank u , next from top to bottom 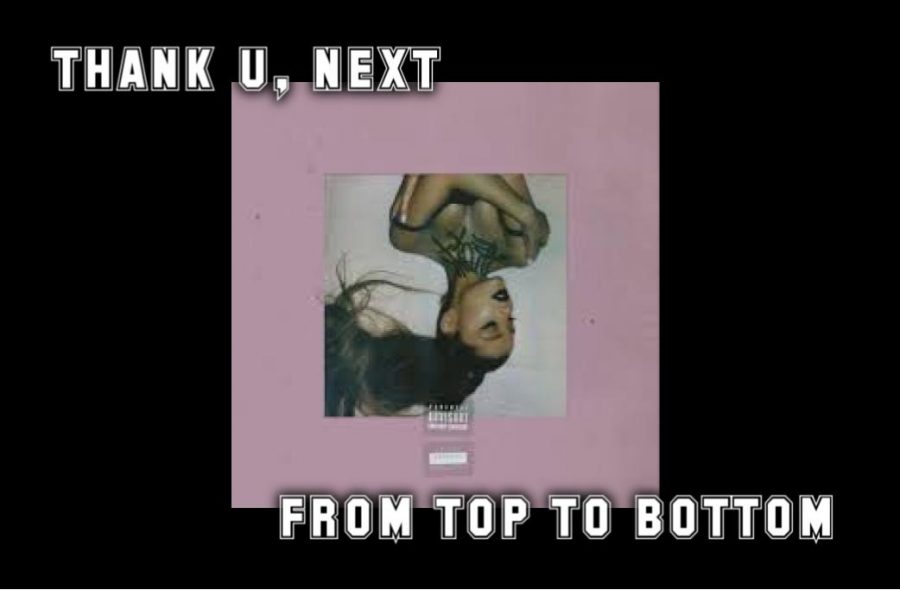 thank u, next has broken records faster than any other album and artist in history, especially for a female.

By: Jada Davis and Kelly Branco

Ariana Grande is currently topping all the charts and taking over the pop industry with her fifth studio album titled thank u, next. Released on February 8, 2019, Grande rose to the top of the charts as soon as the album debuted. All the tracks hit top 12 on Spotify and Apple Music’s US charts, which is considered a historical record for a female pop artist.

Following the breakup of her and ex-fiance Pete Davidson, Grande took to the studio. She had just released her fourth studio album Sweetener in August of 2018 and now released this album not even six months after. Grande has gone through many losses in her life since the 2017 Manchester Bombing at her concert and the death of her long term ex-boyfriend Mac Miller. Ariana pours her heart out in this album. She has no features and is the most real she’s ever been on any album.

Even though we are rating all the songs from “best to worst”, there is no bad song on this album. This album is her best yet.
1. ghostin
“ghostin” is the 8th track on Grande’s newest album, and is one of the most emotional pieces she’s ever released. This song’s theme centers around the loss of Mac Miller, and how it affected her and her former fiancée Pete Davidson’s. In this song, she describes how it hurts Davidson to watch her cry over her ex and how she feels bad about it. However, she also says that Davidson has been so good to her and she is sure they can get through this loss. This song seems to come from a time where they were both still together.

“ghostin” begins with a sample of Mac Miller’s 2009, which is one of the last songs he released before his death. Grande has stated on multiple occasions that this song will not appear on her setlist because it’s far too emotional for her to get through. Because of the contents of this song that touches the heart of many people, it only makes sense that this piece is the best song on this album. Her vocals also sound very soft which is pleasing to listen to.

Favorite lyric: “Every tear’s a rain parade from hell”
2. NASA
Titled after the National Aeronautic Space Station, Grande explains that in a relationship sometimes you need space. Grande sings about how in order to be with a partner you should have space because how can you miss someone if you’re with them all the time? She is known for her interest in space as well as astrology, and she decides to bring it into her new album. This piece very catchy and has a healthy message. In the beginning of this song famous drag queen, Shangela states the lines “This is one small step for woman, one giant leap for woman-kind” which alludes to Buzz Aldrins’ lines when first landing on the moon.

Favorite lyric: “It’s like I’m the universe and you be N-A-S-A”
3. needy
“needy” is about well, being needy. Grande apologizes that she needs more attention than others. She claims that she doesn’t feel needed sometimes and that when she’s in a relationship she feels she can be obsessive since she’s been hurt before. This song has a really catchy beat and has beautiful harmonies in the background. Grande composed the music slowly and showcases her feelings in the best way.

Favorite lyric: “I can be needy, so hard to please me / I know it feels good to be needed”
4. imagine
“imagine” is the first track on this album, and is the second single that has been released off of it. This song is about imagining a world where Grande and her lover can live their romantic life in peace. imagine has been rumored to also be about Mac Miller, but there has been no confirmations as of now. This song is very catchy and well put together, and deserves more recognition as one of her lead singles. The final minute of this song shows off Grande’s whistle notes, which fits the song perfectly.

Favorite lyric: “Why can’t you imagine a world like that?”
5. in my head
“in my head” starts off with a clip of a voicemail from one of Grande’s best friends. The voicemail is from her friend Doug Middlebrook who tells her that she has created a version of a boy in her head that isn’t the person in front of her. This song is very relatable to many girls who create a version of people in their head and become disappointed about who they actually are in real life. “in my head” at first wasn’t a favorite of ours, but grew on us after multiple listens.

Favorite lyric: “Look at you, boy I invented you/ Gucci tennis shoes, runnin’ from your issues.”
6. fake smile
“fake smile” is truly an underrated gem. This song is about the pressures and struggles of acting happy in the public light. This song begins with the introduction from Wendy Rene’s “After Laughter (Comes Tears)”, which is accurate to the songs theme. A lot of these lyrics are relatable even to those who aren’t famous and just struggle with putting on a dreaded fake smile.

Favorite lyric: “I’m happy for love and all of the above / If i’m being honest, I done been through way too much”
7. 7 rings
This is the third lead track on thank u next, and is her second most popular track from this album. This song took inspiration from her real life experiences. After her breakup with ex fiancée Pete Davidson, an intoxicated Grande went to Tiffany’s to buy her and her 6 best friends matching engagement rings. This song is also about money truly being able to buy happiness. This is one of the only three songs so far to be accompanied with a music video, in which features her best friends and her dog, Toulouse.

Upon its release, Grande received backlash for this hit. One of the controversies had to do with a tattoo that she got on her hand after the release of this single. She has always have had an appreciation for Japanese culture, and even has a tutor to help her learn the language. To honor that, she decided to get a tattoo that said the title in Japanese. However, the characters were misspelled and it then translated to “tiny charcoal grill.” After attempting to fix the tattoo, it ended up instead saying, “japanese barbecue finger,” but Grande has learned to embrace this mistake.

This song has a fun upbeat rap style to it, which is different from the rest of this album. This is the best featured single she’s ever released.  It’s great that Grande is branching out to making songs with rap verses without a featured artist.

Favorite lyric: “You like my hair? Gee, thanks, just bought it”
8. make up
This song isn’t really about makeup, rather making up with someone. Grande talks about how she loves to make up with her partners because it secretly makes her feel good. She also references the Fenty beauty makeup line which is a popular beauty line that prioritizes the need to include all skin tones. This has more of an upbeat tone towards it. Grande says that this is her favorite song yet she feels guilty every time she hears it.

Favorite lyric: “ Highlight of my life, just like that Fenty Beauty kit.”
9. thank u, next
Grande released this track first as a single in 2018.  This was released right after her breakup with Davidson and produced a record-breaking music video. “thank u, next” names all of Grande’s ex-boyfriends and she thanks them for all they’ve done for her. She claims that she is ready to move onto the next chapter of her life. She actually has 3 versions of this song but ultimately chose the best version to release. Within minutes, Grande broke many records and rose to the charts.

The music video for this song parodies four early 2000s teen movies. It parodies Legally Blonde, Mean Girls, 13 going on 30, and Bring it On. This music video was her most successful and spawned many other parodies based on the song.

“thank u, next” is the most iconic song from this album, but we placed it lower because it’s been so overplayed at this point.

Favorite lyric: “God forbid something happens, ‘least this song is a smash.”
10. break up with your girlfriend, im bored
This song is the last track of the album and Grande says putting it there was a joke. The song follows “thank u, next” which is about thanking and moving on and this song is begging for someone else to drop their girlfriend for her. The music video for this song has a controversial picture at the end with Grande almost kissing a girl. She sexualizes lesbians in this music video and people don’t like the theme of the song. But there are many other pop songs (Girlfriend by Avril Lavigne) which have the same message, they do not understand it’s a joke. The beat is nice and the chorus is really catchy but this song doesn’t hold a candle to the other ones. In the bridge of this song Grande samples a song from the 2000’s boy band NSYNC. She samples the song “It Makes Me Ill”.

Favorite lyric: “You can call me crazy ‘cause I want you.”
11. bloodline
“bloodline” is one of the first tracks to appear on this album. This song is about not wanting or needing a relationship. Also saying that her former lover needs to let her go. In the beginning of this song, Grande’s grandmother speaks two lines. This sample is quite literally about her not being able to find a hearing aid that satisfies her needs. However, it comes off different in context to the song. “bloodline” is not a bad song by any means, and has a very catchy beat. Compared to the rest of this album, this song is bland.

Favorite lyric: “I know what you need, but it won’t be me”
12. bad idea
“bad idea” in our opinion is one of the least memorable song of the album. This song talks about the “bad ideas” Grande has to numb the pain of getting over her ex’s. The lyrics are really repetitive and the ending ruined the track a bit. The outro started with a nice instrumental and then went straight to a trap remix which ruined it. The ending had potential, really.