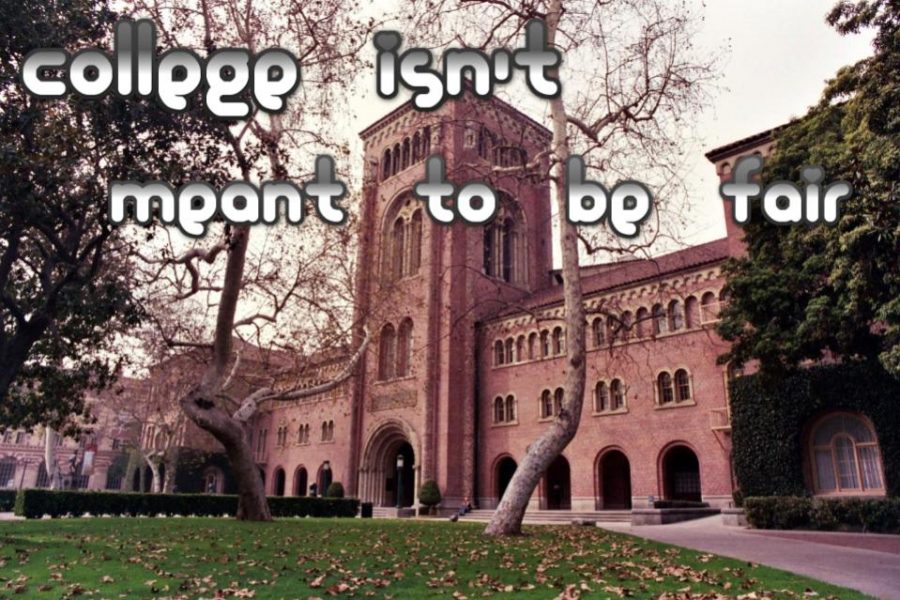 College has never been fair, and so many people are just realizing this now,

Fifty people are facing federal fraud charges due to involvement in a college admissions scam which involved cheating on standardized tests and bribing college coaches and school officials. Some colleges involved included in the scandal are Stanford, Yale and University of Southern California.
Who’s involved with this scam?
The ringleader of this massive scandal is Rick Singer, who ran a for-profit organization called “The Key.” This organization disguised itself as a college preparatory program to help students get into their dream school. However, this company is instead a scam in which wealthy parents pay ridiculous amounts of money to cheat the college system.

Singer would have students say they had a learning disability so they can have extra time on taking their SAT, and would be put in testing locations under Singer’s control. Students then receive answers in order to get achieve higher scores on these exams. But, the cheating goes farther than faking standardized tests. Parents paid Singer in order for him to bribe athletic coaches to guarantee potential students a spot on their team. This highly increases their chances of being admitted to these schools.

Out of these 50 people caught within this scheme, one notable figure to partake in it is Full House actress Lori Loughlin. Loughlin and her husband, Mossimo Giannulli paid $500,000 for their two daughters, Olivia Jade and Isabella Rose, to get spots on University of Southern California’s rowing team. Neither one of them actually can row or were even members of this team. Singer supposedly photoshopped photos to make it look like these girls were on this team. Some have also said that Jade didn’t even fill out her own college application.

Loughlin and Giannulli went into police custody after this scandal broke. This couple is now released on a $1 million bond. As of the date this article is published, there is no official statement from this family. However, sources say that both daughters are extremely embarrassed about this incident. Sephora no longer sells Jade’s makeup brand, and Loughlin is now fired from acting in Fuller House and Hallmark movies. Both former USC students made their own decision to drop out after this scandal. USC stated they are taking holds on accounts for students that may be involved with this issue.
A struggling student’s opinion
Many people point out that due to Jade’s prior success, attending college isn’t a necessity for her to further her career. While I believe that college education is beneficial for everyone, taking a spot, especially from a potential sports team member is cruel. Jade does not by any means deserve to attend an elite university because of her financial status, rather than her academics and athletic performance. Attending a four university is a privilege and luxury for many teenagers. The price of getting a degree leaves so many in endless debt.

One of the most frustrating aspects of this case is the fact that neither one of their daughters seem to even care about getting a college education. Jade is a popular Youtuber, and has been making videos regarding college and her experiences. One video of her circulated saying that she doesn’t care about school. She stated that she’s simply excited to party, meet boys and tailgate. Jade only seems to be attending college due to pressure from her parents. Another thing to note is that in one interview, Jade says that her own father didn’t get through college fairly. This proves that this scandal is rather old news, and people have been cheating the system for many years.

Personally, I do not have the means or even financial coverage to attend a four year university. This is heartbreaking, considering I’ve worked so hard throughout my high school career. I have the grades that colleges are looking for. If I were to attend my dream state college, I would go into an amount of debt that I’m afraid I wouldn’t be able to recover from, which is why I am attending community college. While there is nothing wrong with attending community college, it is heartbreaking that I cannot go to my dream school because of the cost. Meanwhile, there are people such as Olivia Jade who’s rich mommy and daddy pay ridiculous money to get their kid who doesn’t care into elite universities.

I also think too many people are focusing on the students and parents in this situation, rather than the colleges. The fact that these institutes are willing to accept this bribery in the first place is what’s wrong with the education system. College admissions should be based on academics and the unique individuality of each potential candidate. This whole situation shows that the education system nor college is fair. Unless you are one of the few lucky ones to get big scholarships, money is the only thing that matters. Colleges do not care about one’s personal character.