The Goldfinch is a beautiful whirlwind 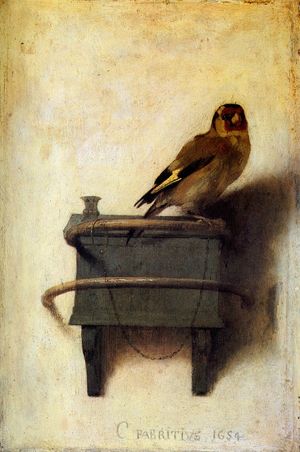 Photo via The Art Stack under the Creative Commons License.

The Goldfinch, a painting by Carel Fabritius, was done for a patron of Fabritius'.

“And I add my own love to the history of people who have loved beautiful things, and looked out for them, and pulled them from the fire, and sought them when they were lost, and tried to preserve them and save them while passing them along literally from hand to hand, singing out brilliantly from the wreck of time to the next generation of lovers, and the next.‬”
The Goldfinch is the most recent novel by Donna Tartt, published in 2013. The novel won the Pulitzer Prize for Fiction in 2014. Ansel Elgort will soon be starring in the film adaptation.
Summary
The Goldfinch is told from Theodore “Theo” Decker’s point of view. It switches from his thirteen-year old self to his older adult self. It all begins with his mother’s death when a bomb goes off in the Met Museum. Left to live with a strange and rich family, he hoards a dangerous secret– a painting stolen from the museum, the Goldfinch by Carel Fabritius. Theo is whisked away from home to home. He travels from New York City to Las Vegas to Amsterdam, and the painting stays with him throughout the journey.
Review
Donna Tartt is a master at prose. The writing style was the highlight of the novel, as seen by the above quote. The novel is not light reading at all– neither in content nor page number, clocking in at a whopping 770 pages. But I found myself flying through the book despite all this, gripped to the novel. It traverses between the dark underbelly of the art world and the messy growth of a teenage boy. The most impressive thing about this novel is how real it felt. I feel as if I could see anyone with the same personality as Theo Decker roaming the halls of my own school, though that person probably hasn’t stolen a priceless work of art.

There is a lot of dark content in this novel. It deals with the death of a parent, neglectful and abusive family members, as well as the trauma of experiencing a terrorist attack. I was wary of this content, of course. I’ve read many books that act as if a person won’t be affected for life by these issues. But Tartt handles it masterfully, and you never get the feeling that Theo has forgotten what has happened. On the other hand, this sometimes overtakes the novel. There were large portions of the book that felt hopeless and extremely melancholy. Now, that isn’t always a bad thing, but when it takes over the novel, it is a problem.

Aside from this problem, the book is beautiful, and it tells us a lot about the healing nature of art. The Goldfinch is not just a priceless piece of art for Theo. It represents his last memory of his mother. The Goldfinch also represents her death, and beauty when there seems to be none of it. The painting follows Theo throughout his life not just because it is very valuable, but because it is a comfort to him. There are pieces of media- film, book, or art- that affect us very deeply. They can be a comfort in times of trouble and uncertainty, and Theo’s attachment to this painting felt as real as someone’s attachment to a song.

If you are willing to sit down with a nearly 800 page book, you will not regret reading this book. The Goldfinch is a must read, and a beautiful journey through an adolescent’s life as he struggles to recover from traumatic events and move on with the help of art, an experience we can all relate to.