Behind the scenes of glee 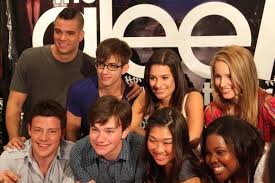 Based on the popularity of th sow, the first episode of the show had about 9.62 million.

By: Megan Anderson , Senior manager of Entertainment and Social Media

Glee is a comedy  TV show about a group of kids in high school. In the show football players would throw slushies in the glee members faces. The show used real cold slushies.