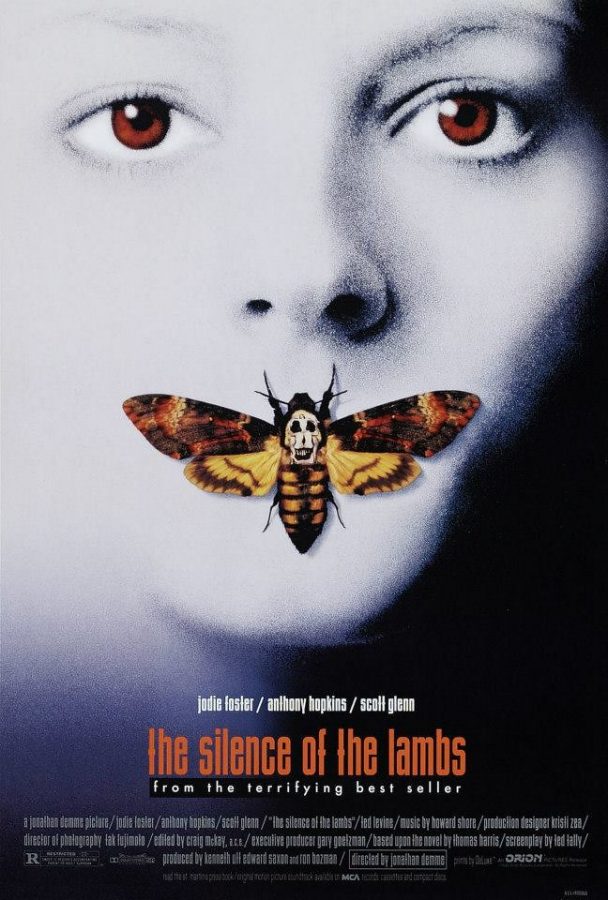 As Halloween is approaching, The Silence of the Lambs is a great movie to watch to get into the holiday spirit.

The Silence of the Lambs was originally a book that debut in 1988 but later on became a film in 1991. It is a classic psychological thriller, including A-list celebrities, academy awards, and serial killers.

The Silence of the Lambs premiered on February 14, 1991 and immediately became a box office hit. It grossed 272.7 million worldwide against its 19 million dollar budget. This became the fifth highest grossing film worldwide in 1991. This movie took home many awards including Best Picture at the Academy Awards for its astonishing work. Also, Jodie Foster, Anthony Hopkins, and John Demme all won Oscars in the categories of: Best Lead Actress, Actor, and Best Director at the 64 annual Academy Awards.
Plot
Foster plays Clarice Sterling a FBI trainee who is assigned on the case of Buffalo Bill. Buffalo Bill is a sociopath serial killer, who kills young women and then removes the skin from their bodies. In order to crack the case, Sterling has to interview Hannibal Lector, a former psychiatrist and incarcerated cannibalistic serial killer.

Sterling heads to Baltimore State Hospital for the Criminally Insane where she is introduced to Lector. Although calm and collected, Lector seems to have a dark eerie aura surrounding him which creeps Sterling out. Lector is willing to offer information about Buffalo Bill but on one condition. He must be transferred away from Chilton where he currently resides.

While all of this is going on, Buffalo Bill is going on a rampage abducting the Senator’s daughter, Catherine Martin. It is now up to Sterling to crack the case of Buffalo Bill and put him behind bars.
Review
The Silence of the Lambs is by far my favorite horror/psychological thriller of all time. Normally I avoid horror films because I don’t like scary movies but I love this movie.  I could watch this movie multiple times, and still get suspenseful if Sterling will stop Buffalo Bill or not.

The lighting, music, and cinematography choices Demme uses bring this movie to life. Not only that, the acting by Hopkins and Foster is superb. I really felt that Lector was a crazy cannibalistic and Sterling was a frighten student just trying to save the day. I don’t think anyone could have played their characters better and for that the deserve their respected Oscar.

My favorite part of this movie was the first interaction Foster and Lector had. The way they talked about Lector I could tell he was going to be crazy but he was even more crazier than I could imagine. When he made that weird noise I was freaked out, come to find out it was completly improvised. This just adds more to the fact that Hopkins is an amazing actor and deserved the Oscar for Best Actor.

Rotten Tomatoes fans awarded this movie 95%, whereas critics awarded it 96%. Usually I disagree with Rotten Tomatoes because I feel critics are way to picky when watching movies but I couldn’t agree more with them in this insistence.

The only real complaint I have of this movie is the pacing sometimes gets slow. Other than that, this movie is amazing. This movie is rated R however so I recommend that only High School students and older see this movie. If you haven’t already seen The Silence of The Lambs I recommend you to do so, especially because it is the Halloween season.