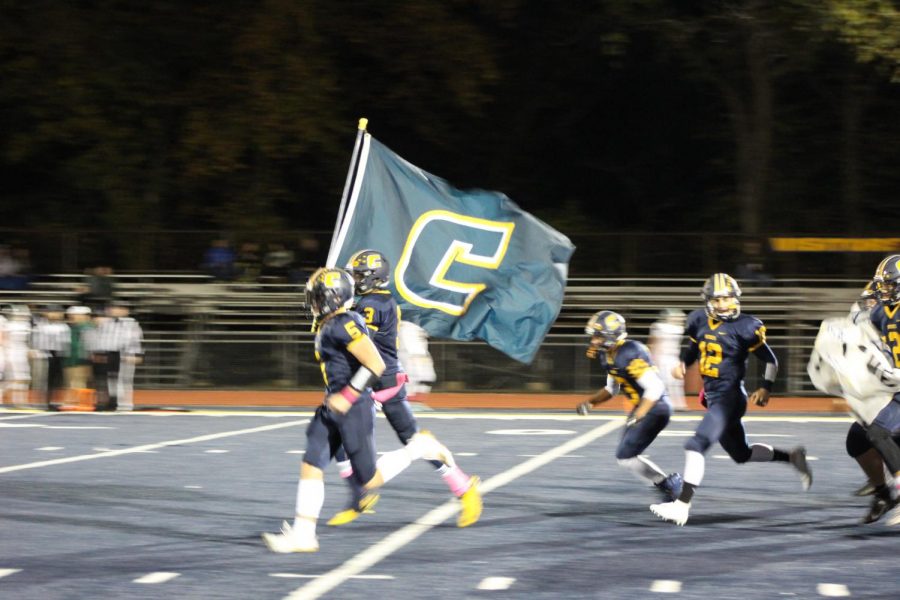 With full support of the crowd, the Patriots took the field to fight for a playoff spot

The Colonia Patriots Football team had it’s ups and downs this season with a record of three wins and four losses, however, they are looking to put those losses behind them and make the playoffs.

The team had many great performances against Carteret, John F. Kennedy, and South Plainfield that put a win in the books. The team also faced some tough opponents and lost against St. Joes, Woodbridge, Hillsborough and Bridgewater Raritan.
Colonia Vs. Carteret
The Patriots picked up their first win against Carteret and according to Captain Tejpal Randhawa, “The key moment in the game was after halftime. We had a lead but realized that they were picking up momentum and we were letting up. We played harder in the second half.” The Patriots had an explosive performance and beat the Ramblers 46-8. Randhawa makes sure to hydrate and energize his body with water and energy drinks before every game so that he plays his best every time. Randhawa has the goal of making all-conference for offense or defense by the end of the season. Randhawa had six tackles in the game that helped the Patriots stay strong on defense, according to  MaxPreps.
Colonia Vs. John F. Kennedy
The teams next win was against rival school team John F. Kennedy. Player Josh Oluremi said that the team had to watch out for some specific players. “Number 7 and 11 were playing hard. We had to look out for them.” Number 7 was Phil Lenzy, the 200 lb running back, and 11 was Keyshawn Dixon, the outside linebacker. Oluremi said, “We were making a lot of mistakes that the other team was capitalizing on. Once we fixed them, we really started going.” The boys won that game with a final score of 42-18, see here on MaxPreps.  Oluremi’s pre-game ritual consists of water and dancing with his teammates to get hyped up. Oluremi is hoping to get a couple more touchdowns before his season ends. Oluremi is having an amazing sophomore season and is working to become the starting quarterback for next years season.
Colonia Vs. South Plainfield
On October 4th, the Patriots played away at South Plainfield. Jimmy Frage, the receiver for the patriots says that his teammate Matt Croteau really made their impact on the game. Croteau had 258 rushing yards according to MaxPreps , and an overall amazing performance. Frage says that the team had to watch out for Sam Nieves, a Senior at South Plainfield. Despite the tough competition, the Patriots came out on top with a final score of 27-12. Frage is determined to have 10 touchdowns by the end of the season and is working hard towards this goal. Frage is a leading receiver for the Patriots.

The Patriots Football team is full of great players. When asked what separates a good player from a great one, Coach Dondiego says “Mental toughness. Football isn’t like other sports, there are less games. It’s a long process. Players need to be fully committed, that means going to practice, film, weight room, everything.” He says that as a coach he looks for commitment, coach ability, determination and energy in his players. Being a good teammate is also very important. The boys are on the borderline of making the playoffs this season, and Coach Dondiego and his team are working hard to get that playoff spot. Good luck to the Patriots!