The Knight Before Christmas: Another Typical Romance Movie 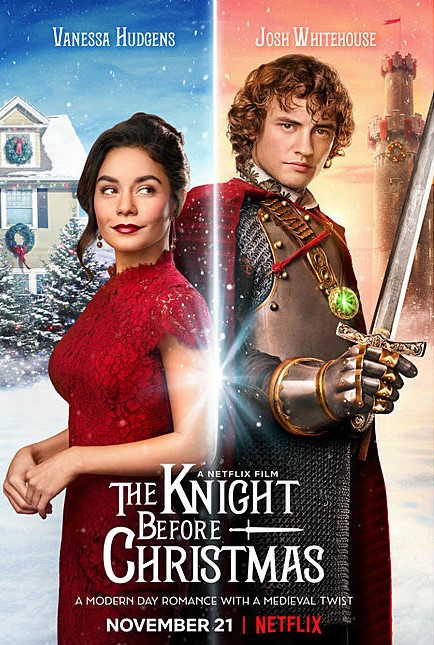 As winter begins there’s no better way to spend it then cuddling up in bed and watching a festive movie. This year Netflix released eight original holiday movies including, The Knight Before Christmas, released on November 21.
Cast & Crew of The Knight Before Christmas
The movie was directed by Monika Mitchell and written by Cara J. Russell. Mitchell has directed different movies and TV Shows and has received 9 different awards. Vanessa Hudgens stars plays the main character, Brooke. She also helped with producing the movie. Hudgens is well known for starring in many movies, like the High School Musical movies, Journey 2, and many more. She also stars in another Netflix original movie called The Princess Switch. Josh Whitehouse plays Sir Cole. Sir Cole is Brooke’s love interest in the movie. Whitehouse is from Britain and is known for being in the British Broadcasting Corporation, BBC for short, series Poldark.

Knight Before Christmas Summary
The movie begins in the early 1300s at Norwich, England. A man named Sir Cole, bumps into a woman in the woods who time travels him to 2019. Sir Cole must fulfill a quest given to him by the lady before midnight of Christmas Eve, if he does not fulfill the quest by then he would be unable to travel back to where he originated from. Sir Cole does not know what his quest is. He must figure it out on his own.

When he time travels to 2019, specifically to December 18, he ends up in Bracebridge, Ohio. Sir Cole and Brooke first met when Brooke accidentally bumped into Sir Cole, spilling hot chocolate on him. Later, while Brooke was driving she crashes into Sir Cole and he had to go to the hospital. The doctors concluded that he had mild head injury which resulted to post-traumatic amnesia. They believed that it caused him to think he was a 14 century knight. The police were not able to figure out who Sir Cole was because he had no ID and was not in the system. He was going to brought down to the police station. Brooke believed it was all her fault. She offered him to stay at her guest house.

The next couple of days Sir Cole adjust to living the modern day life, which is different from the medieval times. He attempts trying to figure what his quest is so that his is able to get back home to his family. Brooke and Sir Cole realizes that they both have feelings for one another. Sir Cole is put into a predicament, he has to choose whether he wants to go back to the 1300s or stay in 2019 with Brooke.
Review
The Knight Before Christmas is your typical, cliche romance movie. The plot is no different than any other romance movie. A girl finds a guy, she realizes she’s in love with him, they go through a problem and break up, then they realize how much they were in love with each other and get back together. The whole movie was extremely  predictable, you are able to figure out what is going to happen next.  Some of the things that happened in the movie was completely unnecessary to have. There was also no common sense in the movie. No one would invite a random stranger into their house. Especially if it seemed like the man was not in the right state of mind. In the movie Sir Cole was able to drive a car, this makes no sense since he is from the 14 century where they got around with horses not cars.

Overall, unless you love watching cliche movies, this movie is not the one you should put on the TV while cuddled up in bed. The movie was unrealistic and I was not able to understand what the purpose of the quest was. The whole concept of the quest was confusing.