Virji unfolding his eye-opening story about his experiences with xenophobia 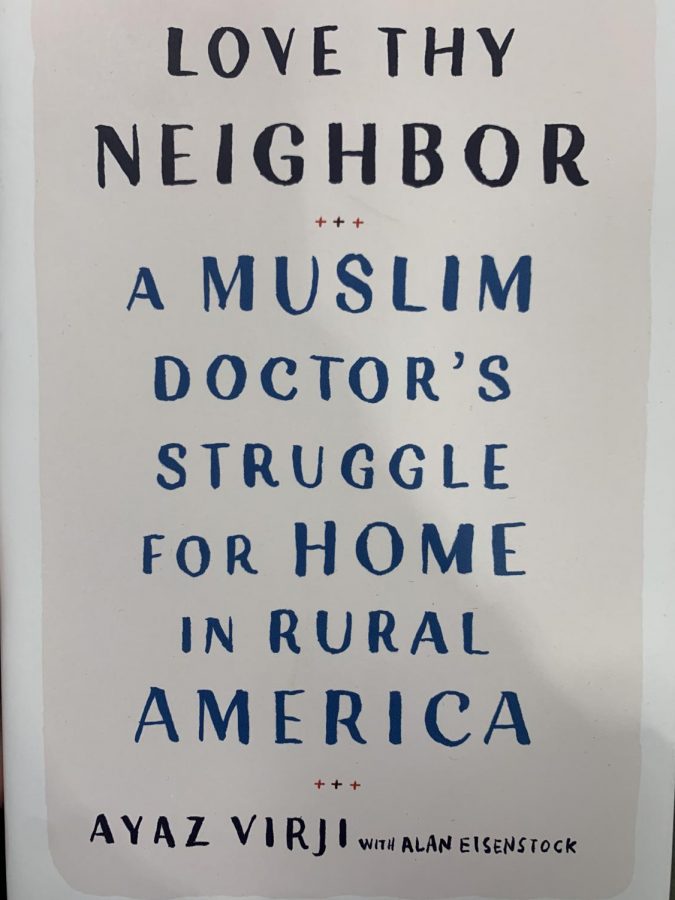 Photo by Christia Assa from The Declaration Newspaper used with permission.

To promote the book the author made it pleasing to the eyes.

Love Thy Neighbor: A Muslim Doctor’s Struggle for Home in Rural America is a powerful and eye-opening autobiography written by Ayaz Virji. It is a true story of a Muslim doctor and his family experiencing xenophobia in their own home.
Summary
Dr. Virji and his family were the only Muslims in the rural town they were living it, which was different than his former home Harrisburg, Pennsylvania. They were living a decent life in their new homes up until the 2016 presidential election, when there had been a huge backlash on Muslims and the rise of hate speech happening all over the country. Numerous negative and inaccurate comments were being made about the Muslim community. Dr. Virji never thought he would experience it in his home but he did.
As this began to happen Mandy, a patient of Dr. Virji who is also an intern at Grace Lutheran Church, and Dr. Virji started an event where they would teach and give knowledge to what Islam is  called “Love Thy Neighbor.”  This was to show that Islam is not what the media portrays it to be. The event is not only for Dr. Virji to talk about what Islam is like but also about what he and his family experienced being Muslims.
Review
The book was anything but boring. It was very eye-opening and brings a new perspective in the experiences and struggles that a lot of people go through that is not acknowledged by other people. Dr. Virji describes the different situations he went through and the emotions he felt clearly. In certain points in the book, you are able feel the pain of what Dr. Virji experiences. One of the more interesting things about the book was when it would compare and contrast the two different religions, Christianity and Islam. The only issue I experienced with the book was the ending of the story. It got a little long and a bit repetitive, talking about the same things over again.
In Conclusion
Overall, I would recommend Love Thy Neighbor: A Muslim Doctor’s Struggle for Home in Rural America to everyone I know. The book would teach anyone, no matter who you are, about a lot of important things like acceptance and understanding. It gives a little insight on the experiences people go through. It is an influential book to read, especially to the people who won’t ever encounter the same or similar experiences the author went through.
Background
The genre of the book is autobiography and biography. The author of the book was Ayaz Virji and was also written with Alan Eisenstock. Eisenstock many other books like Warrior with Theresa Larson and I’m Not Gonna Lie: And Other Lies You Tell When Your Turn 50 with George Lopez. Love Thy Neighbor: A Muslim Doctor’s Struggle for Home in Rural America was published June 11, 2019.  According to Goodreads.com, 695 ratings and the average rating of the book is a 4.2 out of 5.  You are able to purchase the book for $16.99 for a hardcover at Amazon. You can also check your local library if they have the book.