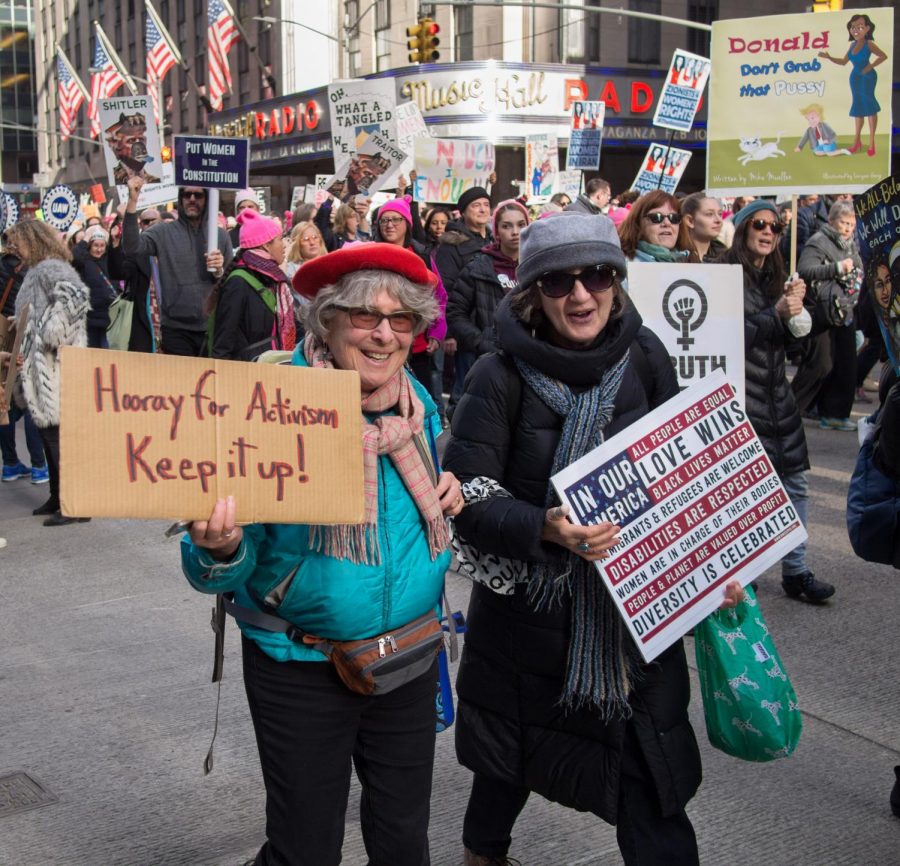 In the 2010's, it wasn't enough to just speak out. People came together in strides and steps in the hope of bringing about change.

Looking back on the past decade, in the 2010’s many people in America used their First Amendment rights and brought their voices to the streets to advocate for social justice movements.
#BlackLivesMatter

Back in 2013, three women, Alicia Garza, Patrisse Cullors and Opal Tometi formed a movement #Blacklivesmatter to help respond to the violence and anti-Black racism towards black people. This all began when Trayvon Martin, a 17 year-old boy, was shot and killed walking home by a police officer. The officer was found not guilty for the charges. Black people came together from all over the world and stood up for the justice they deserve. According to their website, Blacklivesmatter.com, their intentions from the start were for Black people with a desire for justice, to come together and act together.
TIME’S UP

On January 1, 2016 a group of over 300 women from Hollywood decided to speak up. They spoke about their experiences with inequality and sexual harassment in the entertainment industry. These women who had experienced mistreatment came together and started the Time’s Up movement.  TIME’S UP strives to help bring knowledge about sexual harassment and assault at a workplace. They hoped to start a conversation and help end the abuse. Stated on their website, Timesupnow.org, their goal is to help bring safety, equity, and power (disrupting the status quo) in a workplace. Some of the ways the movement helps those who experience these types of mistreatment is by providing those who need help with legal and public relations resources.
#NoDAPL

In April 2016, when finding out about the installment of the Dakota Access pipeline, Native Americans came together to protest against it. Allies, non-native people, also helped to support against the DAPL. The Dakota Access Pipeline, or DAPL, was a project that would transport oil from North Dakota to Illinois. In reference to TheGuardian, it says that the installment of the pipeline “violates federal law and native treaties with the US government.” Native Americans set up camps to resist those to make the pipeline. The pipeline was a problem since it threaten sacred native lands. It also risks contaminating the Native American’s water supply. Allies, non-native people, help support against the DAPL.
March for Our Lives

On February 14, 2018 shots fired at a school in Parkland, Florida. A gunman walked into the school with an AR-15-style semi-automatic rifle injuring 14 people and killing 17. After what they experienced, students from the school did not want others to go through the same traumatic experience they went through. Together, they started a movement and the fight for gun violence prevention policies. After the shooting the March for Our Lives orchestrated the largest single day of protest against gun violence on March 24, 2018. Also, March for Our Lives toured the country and helped register over 50,000 new voters. They started this because they were inspired by the Freedom Writers of the 1960’s. On the website, it said while they were touring they learned more about gun violence. As well as the different affects it had on each community.
Fridays For Future Movement

You probably have heard of the name “Greta Thunberg” before. Thunberg is widely known for leading the largest global climate strike in history only at the age of 16. This all began at Sweden on August of 2018. On school days for three weeks Thunberg sat outside of the Swedish government demanding action on climate change. The government was not doing enough to contribute helping the climate crisis that was going on. In September, she continued to do the same every Friday. Thunberg posted her concern and what she was doing on Social Media. She went viral and everyone started to become interested in what she was doing. Students and others around the world began to join together with Thunberg every Friday in September 2019 on the largest climate strike.

Many of these movements will spill over into the 2020’s as well as new movement will pop up empowering people to stand together and invoke their First Amendment rights as time moves forward. What does it all mean about society? People have raised their standards and will no longer sit quietly when faced with inequality, mistreatment or injustice. As a large group, people are finding their communal voices and realizing their is power in speaking up.