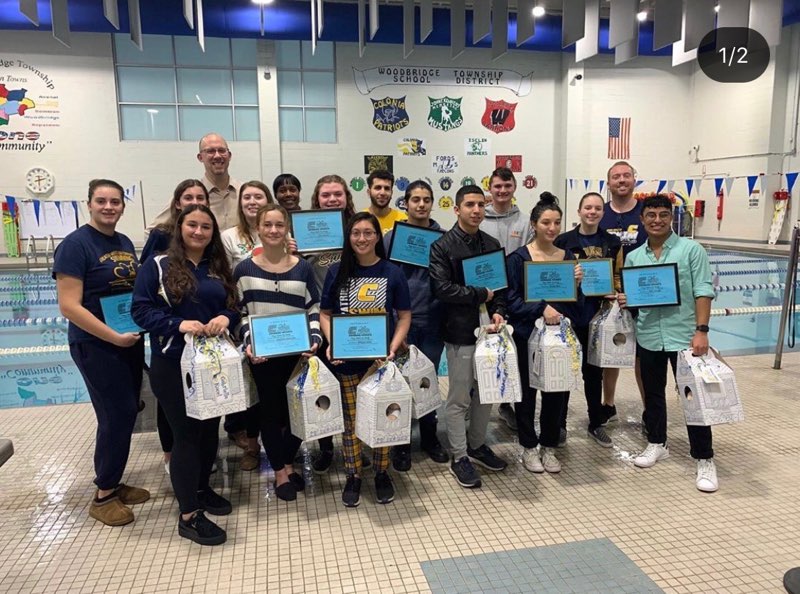 The senior swimming patriots with their build-a-bears and awards during their senior night ceremony.

The Swimming Patriots had quite a year once again, with many impressive accomplishments. Led by another team of great seniors, the Colonia swim team left their mark in the 2019-2020 season.
Regular Season
The Swimming Patriots had quite a successful year again, especially in the regular season. So far this season, they are 7-4, with losses to Metuchen, Wardlaw Hartridge, Bishop AHR, and Union Catholic.

During the regular season, the team has a ranking of #1 in Woodbridge Township, and #4 in the Greater Middlesex Conference white division. Due to strong wins against other teams in the township, such as Woodbridge, JFK and Edison, the swimming patriots were making their way to the top.

“Overall, we have been having a really solid season. We do really well and step up to the challenge of really good teams”, Yash Sharma, senior swimmer says.

The swimming patriots also had many fundraisers that created a level of team bonding, as well as making money for the program. They have cookie dough, fan cloth apparel, Chipotle, and an Applebee’s Flapjack breakfast fundraiser.
Practices
The swimming patriots usually have practice everyday, unless there is a meet that day.

Practices are either at 5:30 AM before school, or right after school. Yash Sharma, a senior swimmer, says “Practice after school are tiring and tough, but they can’t compete with morning practices. Hopping in the ice cold pool that early is no fun, but it definitely wakes you up every time”.
Senior Night
Every sport at Colonia High School has a senior night every year, to honor the many seniors that take part in the programs. This night is a way for Colonia to recognize all the senior swim team members, and their dedication/participation over the years.

January 15th was the Swimming Patriot’s senior night, as a home meet vs. Edison. Going into the meet, there had been anticipation due to the prior meets with Edison. Prior meets had been super close, but the team was very excited for their senior night.

The meet had been decorated with posters made for all of the seniors, with tons of streamers in support. After three quarters of the meet, the Swimming Patriots had pulled away in points, which made the win imminent.

With a win of 98-72, each of the seniors were called up in recognition of their dedication in the program. They each talked about their experiences on the team over the course of the year, and their future plans for college/majors. Each senior was rewarded with a custom Build-A-Bear teddy bear, with their last names on the back. They also receive a small award in a picture frame, emphasizing the time spent in the swim program.

“This year, like every year, losing seniors is a challenge. I have watched many of our seniors transform through this program from freshman year until now. It is sad to lose them, but together, we continue to inspire our underclassmen to step up and reach for the next level”, Coach David Degraw comments.

To end, the seniors take a picture with the coach, then a photo with all of the seniors, and the entire team. The swimmers are also able to give a speech on their program experiences.

“Joining the swim team has been truly amazing. I’ve made tons of friends through swimming and wonderful memories. It is by far one of the best decisions I’ve made in high school”, Melody Espin, senior swimmer says. Melody is also a captain of the swim team.
Swimming Forward
It is enjoyable to see how far the seniors have come, some starting their freshman year, and letting it go may be tough on them. “Taking a look from the perspective of the seniors, for some, the ending is great because they have finished their swim career, but for a majority the season coming to an end is bittersweet”, Yash Sharma comments.

The Swimming Patriots are made up of 9 seniors; some may continue to swim into college or club teams. For some, this will be the end of their swimming career.

“I am currently in my 5th season as the head coach of the Swimming Patriots. Over the past 5 years, I have witnessed this tream transform. Starting with a team that kids did for fun into a truly competitive atmosphere with a focus on teamwork and sportsmanship. Nothing is better than keeping the “fun” in swimming, while reaching for your persnoal goals and team objectives. This year, we have had some stellar young talent, but it will continue to improve and grow over the next few years”, Coach Degraw says.
GMC’s
Going into the Greater Middlesex Conference tournament, the swimming patriots have a good chance of finishing the season strongly.

“Our goals for going into the GMC’s are simple; do your best and reach toward greatness”, Degraw says about the tournament.

January 24th starts the boys GMC’s and Saturday, the 25th starts the girls. After the GMC tournament, there is one last swim meet, and then the season ends.

“No matter what the outcome is, these four years have been great. The last few meets have been emotional, and it is sad to know that it is coming to an end, but I’ll always cherish the memories I’ve made”, Espin comments.