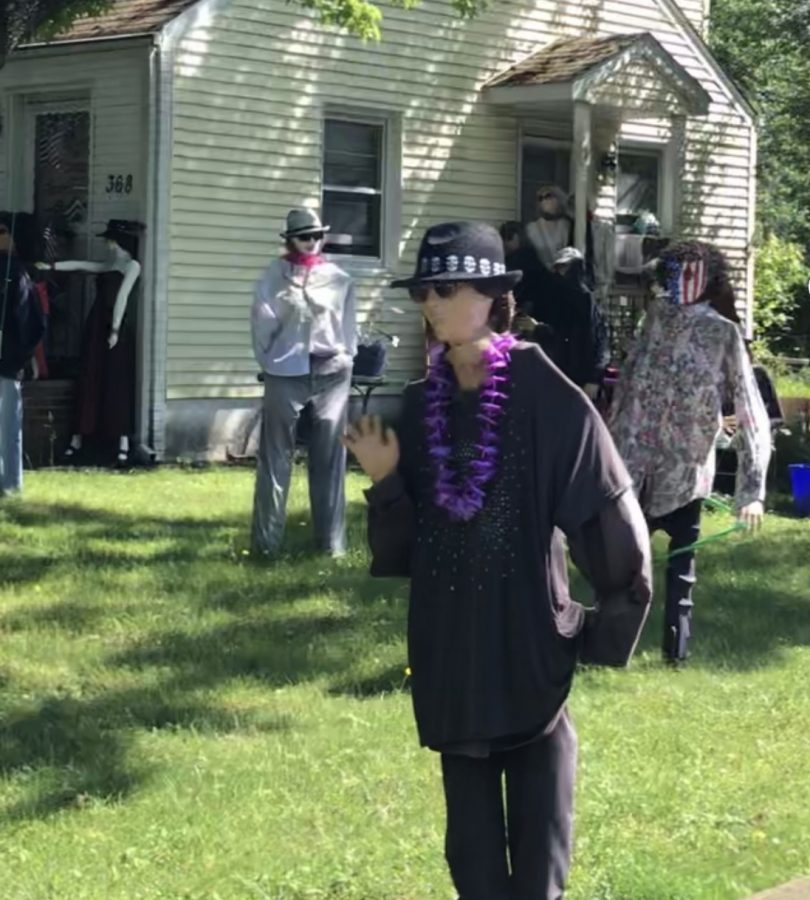 A few of the decorated mannequins in front of the "mannequin house" in North Brunswick, New Jersey.

It’s Halloween all year round in North Brunswick, New Jersey. If you have ever driven off of U.S. Route 130, into North Brunswick, your head has definitely turned at the 30 + mannequins on the corner of Washington place.
Mannequin House
On the corner of Washington place and Route 130 in New Brunswick, New Jersey lays a house with a surprise. This house, contains a lawn filled with 36 life-sized mannequins. These mannequins are dressed up as all different people, with hairstyles and facial expressions.

The mannequins are in groups into alternate styles and themes; some are rockstars and some have wigs and hats, waiting for sports games.

The mannequins have a human-size, which makes them even more intriguing for drivers. There are mannequins actually set up to look like they are barbecuing, or sitting at a table in front of the garage.
Who lives there?
Who really lives at 368 Washington Place, behind the manneuqins? Dee Luzack lives in this house, along with her partner, and the artist, Michael Calatoni.

Calatoni is a comic artist, that started to create mannequins out of recyclable items. He had started with one mannequin, but then continued to make more out recycled items such as bottles, tape, wire, and wigs that had been left over at a party store that he works at.

Calatoni also has two mannequins in his car, that he built, which he leaves in it when he drives. When asked about inspiration for the mannequins, he says “he has always built smaller figures, but now his works are getting larger”.
Reasoning?
So what’s the reasoning for these creepy, but intriguing Mannequins?

Michael Calatoni, the mastermind of the art pieces, comments that they help slow down fast drivers. By getting drivers to turn their heads at the house and slow down, Calatoni is making the turns on the corner a safer street.

U.S. Route 130 and the corner of Washington place is a dangerous road, as there have been many crashes recorded on these high-speed roads. Drives turn quickly off the road, leaving pedestrians and other drives vulnerable to car crashes.

Calatoni says in an article with My Central Jersey that “safety was the original reason I started making mannequins. I usually walks or rides his bicycle and it was dangerous for me to cross the street.”

The mannequins do serve their purpose, for when my friends and I are turning onto this street, we slow down. The first time we had passed it, we were on our way into East Brusnwik, but had stopped to investigate. It was interesting to see the decorative mannequins and we wanted to look up close for ourselves. We were able to pull over and cross the busy street to take pictures, and see the mannequins up close. With intricate details from the recycled items, the mannequins each have their own personality, and design. Some are sitting in lawn chairs, some are standing near the door, welcoming visitors. Overall, we had slowed down and stopped, proving the point that Calatoni wants to make, of slowing down on such a busy street.
Recognition
This mannequin display is in many different news articles; online and on television. The “manneuqin house” is even featured in an issue of Weird New Jersey.