A look into “The Kissing Booth” 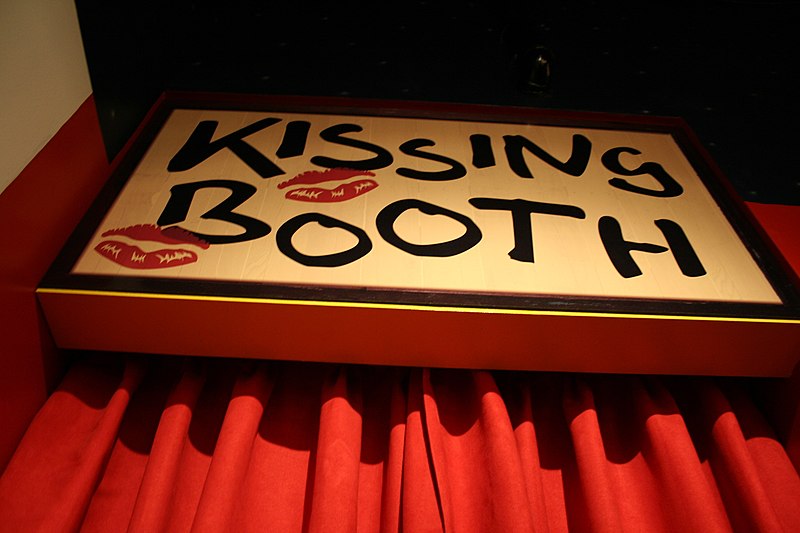 The Kissing Booth is a teenage romantic comedy, released on Netflix in 2018.

Valentine’s Day is quickly approaching, filling many people with the spirits of love and affection. From passing out valentines and chocolates, to buying flowers, many people participate in this love-filled holiday. With this holiday comes heartfelt, and often cheesy, movies. The Kissing Booth is one movie about love that can be watched in anticipation of Valentine’s Day.
Film Production
The Kissing Booth is an American romantic teenage comedy film released by Netflix on May 11, 2018. Written and directed by Vince Marcello, it is based on the novel by Beth Reekles.

The run-time is 1 hour and 45 minutes and was filmed in Cape Town, South Africa and Los Angles, California.

The movie is on Netflix, which requires a subscription. It did not premier on television or in movie theaters.
Plot
The romantic comedy follows Elle Evans, a teenage girl that has never had her first kiss. She decides to run a kissing booth at her school’s carnival with her best friend Lee and ends up kissing her secret crush. The problem is, her secret crush is Lee’s brother!

The film follows Elle as she is forced to make a difficult decision between her life-long crush and her best friend. Noah is totally off-limits according to the best friends code that Elle and Lee made, so she is stuck sneaking around, and she feels guilty for lying to her best friend. Elle eventually has to make a decision between Lee and Noah. She must decide between friendship and romance.
Book
Originally, Beth Reekles wrote The Kissing Booth, the novel the film is based on. Reekles is a 24 year old British sensation, as she first published the novel on the popular writing app, Wattpad.

Reekles had first written The Kissing Booth at 15 years old. The novel had become popular while she was writing it on Wattpad, and she was able to look for publishers.  In an interview with Forbes.com, Beth talks about how she turned her Wattpad story into a sensation.

“I was approached directly by an editor at Random House (now Penguin Random House) through a private message on Wattpad,” Beth says. “She told me that they were interested in publishing The Kissing Booth and gave me her email address to get in touch. We soon after set up a call and then I met with them in their London office, where they offered me a three-book deal,” Reekles remembers.
Review
Surprisingly, The Kissing Booth movie has a negative rating by critics, even though it was a hit on Netflix.

Many critics say that the movie is too cliche and has a misogynistic view.

Indiewire.com has a harsh review on this so-called romantic teen movie. “Netflix’s newest hit-in-the-making, ‘The Kissing Booth,’ is kicking up similar attention. Unfortunately, the high school-set rom-com is a sexist and regressive look at relationships that highlights the worst impulses of the genre,” they write. “In another film, the sentiment would be a romantic one. In ‘The Kissing Booth,’ it feels like a cage”.

It has a rating of 17% on Rotten Tomatoes, with a review of “The Kissing Booth deploys every rom-com cliché in the book with little care given to achieving any real sentiment”.

It has no actual content rating, but some say that the movie is TV-14 and that “parents should keep their kids away from this flick”. There are many reasons to why, as there is some swearing in the movie. There are also many slightly inappropriate scenes, such as Elle wearing a very short skirt, or stripping at a party, where she is consuming a lot of alcohol underage.

The movie received some harsh reviews, but it was still nominated for an accolade. The Kissing Booth has a nomination for the “Favorite Movie” award at the Nickelodeon Kids Choice Awards on March 23, 2019. Even though the movie did not receive the award, the main actress of the film, Joey King, won the category of “Best Actress.”
Sequel
Despite the first movie’s negative reviews, the producers have decided to continue with a sequel. As of February 14, 2019, the sequel has a title of The Kissing Booth 2.

There is no specific release date for the sequel, but Netflix posted an Instagram trailer. The release time is approximately in Spring of 2020. Filming had started in June 2019, and finished in October. It is said that the original cast will return, after buzz about Noah Elordi not appearing in the 2nd film.