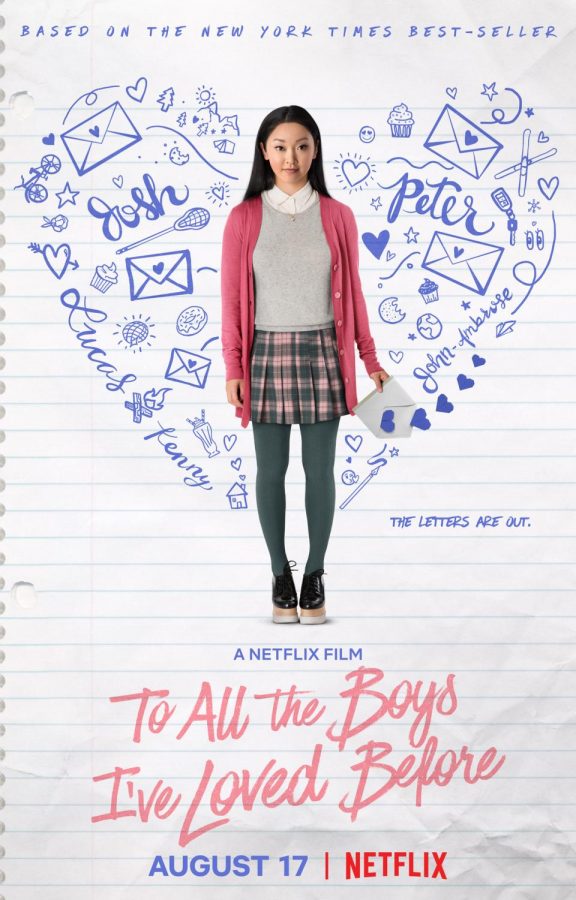 On August 17th of 2018, director Susan Johnson released a teen Rom-Com, To All The Boys I’ve Ever Loved Before.

Lara Jean writes letters to all of her past crushes but never sent them out. Until her sister, Kitty leaks all the letters and wreaks havoc in Lara Jean’s life. It begins to get worse when her crushes begin to confront her one by one. In total there were five letters and three of the boys replied to the letters. Among these boys are Josh, who happens to be her older sister, Margot’s boyfriend. A boy named Peter Kavinsky, her arch-nemesis Gen’s boyfriend. The third crush was not emphasized in the movie. As she learns to deal with her crushes face to face, Lara Jean discovers that something good may come out of these letters after all.

The plot revolves around Lara Jean’s letter to Peter Kavainsky. She doesn’t want to admit that she still has feelings for him, Lara Jean tells Josh that she is dating Peter Kavinsky. This causes a plan to form which intern would help both of them. The plan was to pretend to be a fake couple so that things can go back to normal between Lara Jean and Josh and so that Peter can make his ex-girlfriend Genevieve jealous. This all changes after an annual ski trip during Christmas stirs up trouble.

While watching the movie the reviewer is meet by some unfamiliar actors. The first actor is Lana Condor who plays Lara Jean. Condor is a Vietnamese-American actress and dancer. Before being cast to play Lara Jean into All the Boys I’ve Loved Before, she starred in as the mutant in the 2016 superhero film X-Men: Apocalypse. In that same year, she appeared in Peter Berg‘s drama film Patriots Day. In 2017, Condor co-starred in the romantic thriller film High School Lover, alongside James Franco and Julia Jones, which premiered on Lifetime.

Another important character within the movie is Peter Kavanisky. The actors who play Kavinksy is Noah Centineo, an American actor. He is known for his roles in the final three seasons of the television series The Fosters and the Disney Channel film How to Build a Better Boy. After the airing of To All the Boys I’ve Loved Before, Centenio became apart of the cast of  Sierra Burgess Is a Loser. He played the character, Jamey and has gained much fame from this film and is growing immensely.

While the younger audiences thought the movie is “one of the best movies they have ever seen,” parents took a more negative outlook towards the movie. Some parents put an age limit on the movie saying, “maybe 12 and up should watch because of the talk, and inappropriate content.” Other parents think the movie is a “great movie, especially for young people! There aren’t any provocative scenes and is perfect for those who want to watch a story about young love.”

Besides the variety of opinions from the parents, the tweens and teenagers loved it. From the site common sense media, most kids had a positive outlook towards the movie. Others thought the movie as a soft, and heartwarming movie to watch. Some of the comments were negative as well. One negative outlook said “It would be a crying shame to waste your time watching this horrible movie. Please, a little less “romance” talk. Terrible acting, terrible writing, terrible directing, terrible morals. Really. Just don’t.” However, the overall consensus was that the movie was appropriate and family-friendly.

In my opinion, I thought the movie will become a classic rom-com with a bit of a new style. Many romantic movies can seem cheesy and boring, however, this movie added its own twist. I think the actors did a good job playing the roles and truly expresses their true emotions. It’s the perfect movie to watch with family, friends or by yourself.

This movie received multiple awards since the release date. Three awards that were given were an MTV  Movie Award for Best Kiss, Best Breakthrough Performance, and a Kids’ Choice Award for Favorite Movie Actor. The studio that first released the movies was Netflix and instantly gained much attention from its audience. The movie runs from 99 minutes to about 101 minutes. The director post said that they would be making a second part of the movies called To All The Boys I’ve Loved Before 2: PS I Still Love You. The release date of the movie is February 14th, 2020.