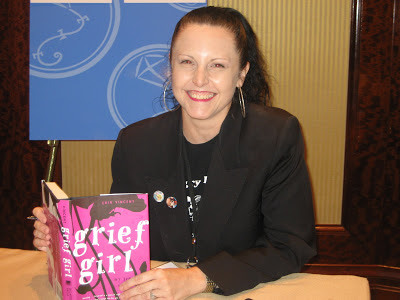 photo via blogspot.com used with permission

Grief girl is a book portraying a true story. The book is written by Erin Vincent and originally published in 2007.
The Book
The book Grief Girl is about a girl who was just having a normal life style. Her parents were out on a Saturday night and she was just staying at home doing homework. While her older sister was out with her boyfriend and her brother was at her mom’s friend’s house. It starts to get late and she doesn’t know why they’re late. She starts thinking the worst and overthinking but then gets herself to stop thinking negative.

She then calls her mom’s friend to check on her brother and ask if she had heard anything, but her mom’s friend says that she hasn’t. So that makes her even more suspicious that something bad happened. She then gets a phone call that her parents have been in a bad car accident that left them dead. That’s when she started going downhill. Her older sister became the guardian for her and their brother. They had to find a way to live whether it was finding a job and providing for themselves.

During the whole process she was really depressed she started giving up on school work. She went to school looking like a a bum, and she was going through a really bad depression period. It wasn’t until she want to a young writers conference that she changed her life around and then she eventually became a published author and wrote her story.
My Opinion
I really enjoyed reading this book . To think that it was a true story and people could turn their lives around after going through a tragedy. It is really fascinating. When I was reading this book there was a point when I was in tears because even though she was going through a lot I couldn’t imagine how her older sister was feeling. Being one of the oldest I can’t imagine what I would have done if I was in the same position. Having to care for a whole family at such a young age it’s a lot.

Another thing I really liked about this book is the fact she came out of all of this. We always here about the  people that lost someone so close to their heart and their life had gone down hill from there. Which doesn’t really portray that there’s hope for someone going through the same thing. In this book though the author goes through on of the toughest times in her life. She still managed to pick herself up and be the best person she can be after the terrible storm.