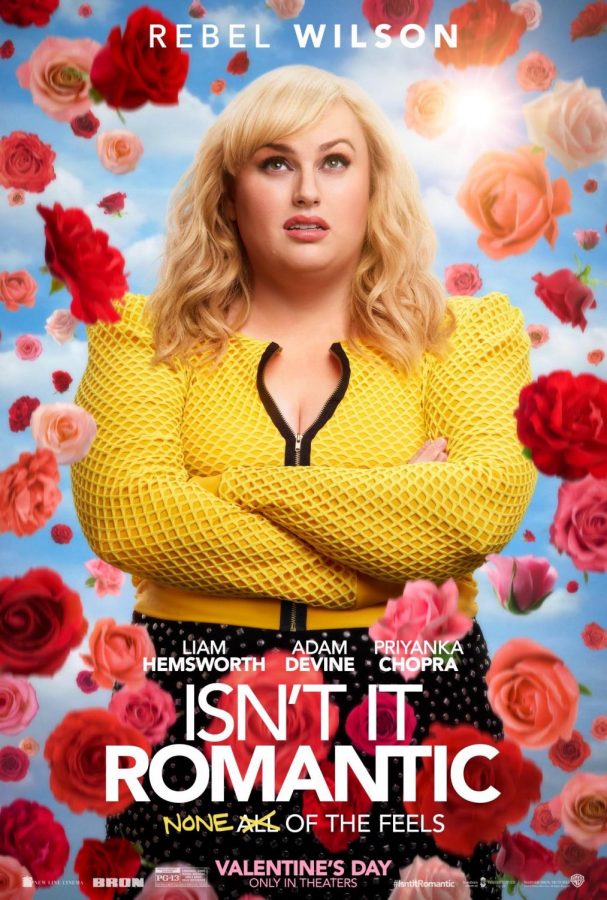 Before watching this movie, thoughts may be that it’s just the typical romantic comedy. However, Isn’t It Romantic makes it’s own twist on a romantic comedy.
Summary
The movie starts out with Natalie, played as Rebel Wilson, who works as an architect in New York. She’s trying to make herself known, and does so by attending different meetings, however, is just seen as a coffee & bagel deliverer. At one meeting she has an encounter with Blake, a successful architect. After this embarassing run-in, Natalie finds herself getting mugged on the subway. During this, she hits her head on a pole and falls into a deep, deep sleep.

Natalie is awoken by a good-looking doctor, and is immediately confused on where she is. As soon as she flees the hospital, she realizes she’s not in the world she fell asleep in. But, she’s living in a rom-com. Being someone who was raised to not idolize romantic comedies, she has mixed feelings about this. On the street, she runs into Blake, the man from the meeting earlier. Now, instead of completely ignoring her, he sees her in a different way. Once they part, Natalie arrives at a decked out apartment, nothing like how it was before. Even though she’s confused at first, she falls in love with this new lifestyle she obtained.

Throughout her time living in a romantic comedy, Natalie is faced with many obstacles that would be seen in a normal rom-com. Towards the end of the movie, Natalie realizes that the only way to get out of this movie, is to fall in love. Thinking that Blake is who she’s in love with, she finds it easy. However, that may not be the case. Natalie realizes that the person that will get her out of this nightmare, is the one person that had been there for her all along. Now, will she be able to get him?
Review
Isn’t It Romantic is a movie that brings light to the usual lovey dovey Valentine’s Day movies. Rebel Wilson, who plays Natalie, is the perfect role for this movie. One enjoyable thing about this movie is that it highlights diversity, and different body shapes. Unlike other romantic movies where the female lead is strongly dependent on the male, this movie plays it different. This was a very refreshing movie to watch. At the end, Natalie realizes that she does not need a man, as long as she loves herself. This message is something that isn’t seen often in the movie industry.

One of the best parts of this movie is that it has you laughing the whole time. Although, it may not be the basic romance movie you’d like to watch on Valentine’s Day, it’s more something that you watch with your friends, if you don’t have a Valentine. Rebel Wilson, along with the rest of the cast, portrayed their roles very well and made the audience want more. Throughout the movie, there were many laughs, a few tears, and a smile across the face of anyone watching it.

My overall rating: 4.5 out of 5 hearts! Happy Valentine’s Day!