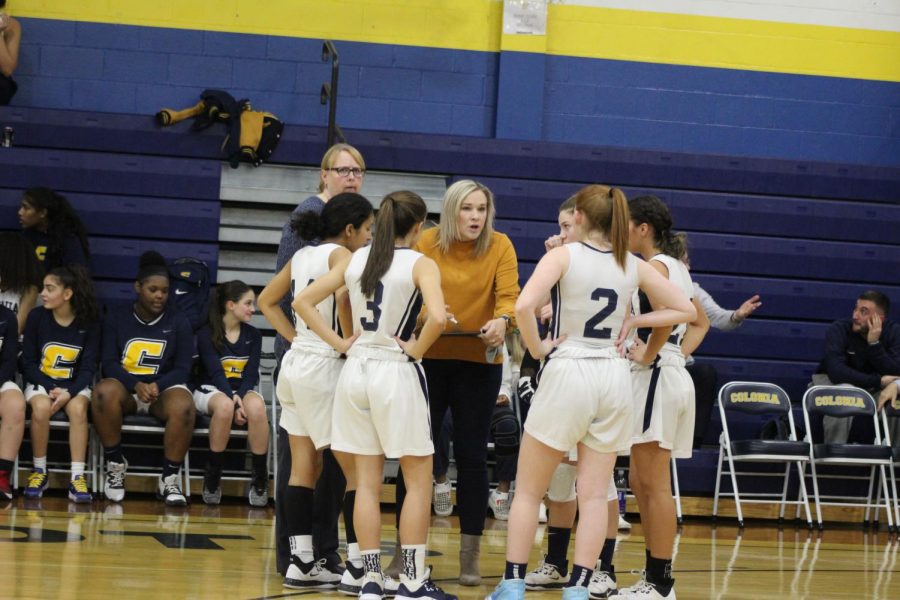 What happens during this game determines who advances in the GMC tournament, so the pressure was on the Patriots.

On February 15, 2020 the Colonia Varsity Girls’ Basketball team versed New Brunswick HS. This was their play in round for the Greater Middlesex Conference and both teams played a competitive and aggressive game.
First Quarter
The starting line up for Colonia was Matti Chiera, Alyssa Fasulo, Sabrina Williams, Gaiatana Aquilu, and Francesca Rosario. Right off the bat…  Around halfway into the first quarter, Colonia leads 6-0. From there, they were consistently leading by at least 10 points at all times. During this game, New Brunswick HS lacked the ability to score points, but had a really good defense. They rebounded Colonia’s baskets and instantly started running down to their side of the court. Rosario(#14) gets substituted for Kennedy Goncalves(#22) with around 1 minute and 30 seconds left. On New Brunswick team, Lexi Tucker(#32) scores the first points for their team. Then, from Colonia, Fasulo(#3) took a charge with only 9 seconds left. This quarter ends off with Colonia leading 13-4.
Second Quarter
Starting off the game with a strong lead, Williams scores the first points in the second quarter with a layup. From New Brunswick, Tucker(#32) makes a two pointer bringing the score to 17-6. New Brunswick made some fast breaks whenever they got the ball, but failed to actually score the points in their basket. The dedication and commitment the New Brunswick coach has for her team led her to continuosly trying to help them as best as she could, even when visibly frustrated. Towards the middle of the second quarter, Aquilu gets substituted in for Rosario. A senior, Nessiah Coleman(#15) from NBHS breaks her glasses accidentally while playing in the game. She slides them to the side and continues playing. The second quarter ends off with a strong lead for Colonia, 31-8.
Third & Fourth Quarter
During the third quarter, only 5 points were scored by Chiera, Fasulo, and Goncalves. For New Brunswick, they accumulated 3 points made by Tyana Riles and Coleman. By the end of the third quarter, the game score was 36-8 with a big 28 point lead. During the 4th quarter, NBHS coah, Christina White kept telling them to do the plays “spain” and “texas”. The play works less than half the time they attempted it, but it did still get them some points. For the last 3:50 minutes of the game, all of the players from Colonia sub out. Tucker made a clean 3 pointer, giving NBHS 20 points total. Goncalves makes both of her foul shots with 50 seconds left in the game. The final score of the game was 47-22.

From Colonia, Chiera accumulated an overall of 20 throughout this game, a little bit lower than average, but still very good. Fasula made a total of 9 points throughout the game and Rosario with 6. Serena Neal, Goncalves, and Wilson with a total of 4 points. From NBHS, Ismel Martinez accumulated 9 points, Tucker with 7, Victoria Rames with 3, Riles with 2, and Coleman with 1 point.