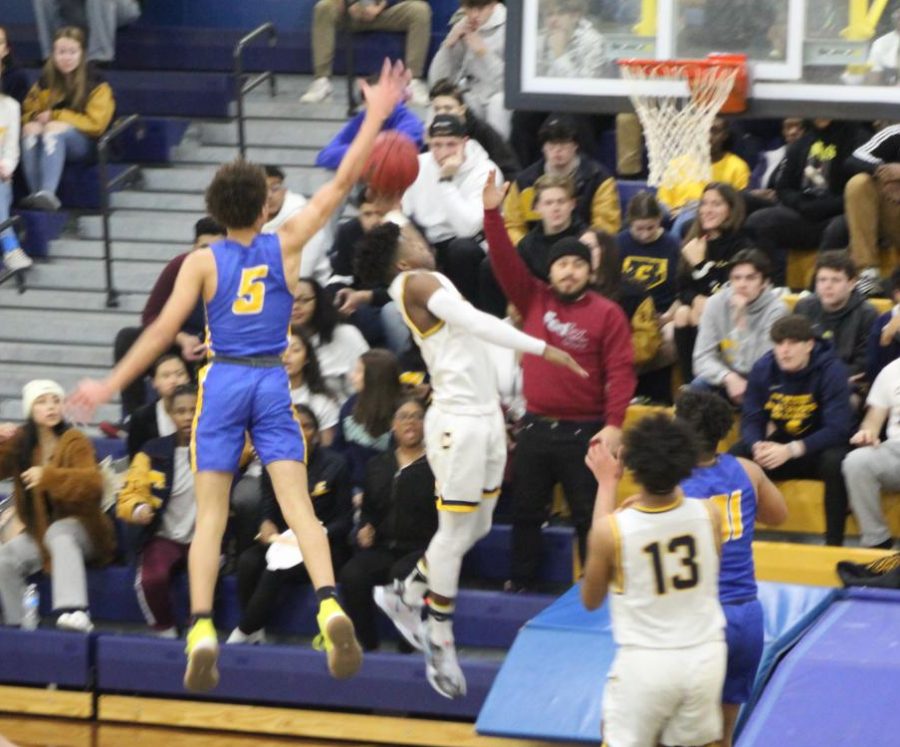 Driving the lane, Senior Jimmy Frage gets the deuce for CHS.

Colonia started the first round of GMC’s well, winning 56-48 against the North Brunswick Raiders.

In the regular season Colonia and North Brunswick went head-to-head twice. Colonia won both games with the recent game being a close match of 51-50. The North Brunswick Raiders have not won GMC’s since 2013 in the White Division. The Colonia Patriots did well last season at GMC’s, they were 1st place last year.
The Game
This was the first round of GMC’s, the game was intense. The gym was filled up with enthusiastic fans from both teams. Many fans were rooting hard and cheering for their team. In particular, Colonia’s student section, known as the Colonia Crazies, brought fat heads of the seniors and coach. They were being held up all night to help motivate the boys.

The pressure was on, only one team was going to make it to the next round. The Raiders and Patriots had to play hard in order to continue to the next round. The game started off with Jabri Fitzpatrick from North Brunswick hitting a 3 pointer. They had a fierce game, the first quarter ended with Colonia leading 19-13 with Ruben Reyes making a buzzer beater in front of the half-court line. By halftime Colonia continues to  lead the score with 32-22.

On the opposing team, North Brunswick Raiders, Jabri Fitzpatrick scored 20 points for his team.
Colonia’s Future
Although winning the game the players on Colonia learned what they needed to improve on in their upcoming game. Frage mentioned how the team knew they needed to improve more on their communication and playing as a team together. When there are mistakes being made they knew they should not allow it to let them down. They must work together to find a solution.

Colonia continued GMC’s and played against St. Thomas Aquinas and lost. They were not able to continue  GMC’s, but they will play in states this upcoming against Mendlham on March 2nd.

Between the games against North Brunswick and St. Thomas Aquinas the boys learned a lot and are prepared for states.

Preparing for states Jordan Derkack, a junior, says “We have been watching film and been going through their sets in practice along with preparing ourselves with reviewing our plays and continuing to condition and stay in the best shape possible.”