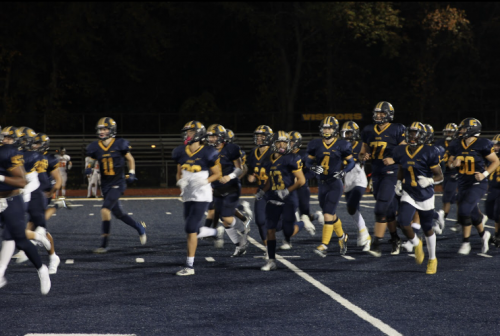 photo with permission from Mrs. Murphy

Coming off the field, the players walks towards the coaches to talk.

COVID-19 has affected a lot of people in direct and indirect ways. For instance, high school athletes were directly affected and many had to sacrifice possible college scholarships.
Statistics
Already 4 Woodbridge Township Schools have returned to virtual learning after around 36 cases of COVID-19. The cases nearly doubled in one night in October, going from 15 to 36. The district started the second phase of it’s back to school plan on October 12. Since then, less than half of the approximate 14,000 students chose the hybrid model (both in-person and remote instruction) in the township.

Superintendent Dr. Robert Zega stated in a video update to students, parents and staff, “We use scientific metrics to assess the safety of our schools. If at any time we feel the need to switch back to Phase 1, fully remote, we will make that decision only after careful consideration of all factors.”

Most of the schools that closed were elementary schools, except JFK High School. This caused multiple games for different sports to have to postpone or cancel, therefore, affecting student-athletes. Some looked at their situation in a more positive way, but, many believed their season could end after any game due to a high number of COVID-19 cases.
Difference of opinions
Zeyad Elbarshaly, a Varsity soccer player at Colonia High stated, ” I was motivated to play my absolute best since I treated every game like it could be our last.”

But, others had a harder time throughout their season in fear of getting COVID- 19. It hasn’t been an easy transition for everyone. Some may have found it harder to cope than others, especially seniors having to end their last season this way.

Priyanka Sinha, a Senior Tennis player at CHS said, ” Personally, I wanted to maintain a safe distance from my partner and my opponents, so I couldn’t run wherever I wanted on the court.”

She was overjoyed to have been apart of this year’s team and for making it to the states. It was a huge accomplishment for them, and she hopes the legacy continues. Though she was bittersweet to hear, Zeyad state that some of the games were canceled, one of them being a states game.

He said, “with the restrictions and everything, most college scouts were not able to attend the games, so nobody was there to be able to grant that opportunity.”

On the other hand, fortunately for football players, they can reach out to college coaches and send their films. Another way colleges can scout people is by watching football live streams. This option gives a socially distanced alternative but it isn’t available for all sports.

Joshua Oluremi, a Junior quarterback and safety at CHS said, ” I can always reach out to coaches, but thousands of kids are doing the same, so it can be hard to reach them. More kids have more time to reach out to them. But also, coaches have had more time to look at the film so it has been kind of the same.”