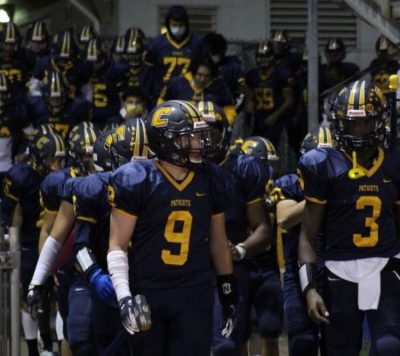 photo via Sophia Wintonick with permission

The Patriots are lead into action by their captains, one of them (left, number 9) being senior Chris Waldron. Waldron, along with five other seniors will say goodbye to the sport they love.

Saying goodbye to a sport is one of the hardest things to do. With football season recently ending, this year’s senior football players will be forced to say goodbye.

This years senior class has six players. These players are Chris Waldron, Collin Mcbride, Antwone Godfrey, D.J. Pamplin, Steven Miller and Michael Krowicki. Some of these players were interviewed to reflect on their football career.
Chris Waldron
Chris Waldron is a wide reciever and line backer. Waldron played football for all four years of his high school career. He was the team captain this year.

Waldron was asked why he decided to play football. He responded “I decided to play football when I was really young. It’s almost like a family tradition to play football. I grew up in a family of people that love the game.” For Waldron, playing football is about making his family proud. Waldron also said, “I couldn’t have asked for a better experience. From the coaches to my teammates, they all made my experience special.” Waldron is clearly thankful for the opportunity he’s been given. He’s also thankful for the people he’s been around.
Steven Miller
Steven Miller is an offensive lineman. Miller played football in the 2019-2020 and 2020-2021 school years. Despite not playing until his junior year Miller was still able to be a productive player and a good leader.

Miller was asked what was his favorite moment about his football career. He responded “Favorite football moment was when I came back from my knee surgery and got my first start of my varsity career.” Due to his surgery, Miller’s first start was harder for him to get than it is for most. Once he did get the start it was all worth it to him. Miller also said in the interview “Just the fact that you leave with 50 new brothers is the best feeling to me.” Sports, more than anything, provide you with friends for life.
Antwone Godfrey
Antwone Godfrey is a wide receiver and defensive back. He played football for all four years of his high school career. Godfrey has been a consistent force for Colonia.

Godfrey was asked if he had any regrets about his career. He responded, “Not one bit football made me the man I am today and taught me about responsibilities and how to better my future as a man.” Sports give valuable life lessons that you won’t forgot as long as you live. Godfrey was also asked if he thinks he will ever play football again. He responded “Yeah hopefully, I really love this sport so much and I want to continue in college.” The sport of football has already given Godfrey so much. Godfrey hopes he can continue doing what he loves.

Although not all the seniors were interviewed for this article, they all do deserve a shout out. They all worked hard and gave the Colonia High School Football Program their all. One can only wish these seniors the best in the next chapters of their lives.