Pros and Cons of the Apple Watch and Fitbit 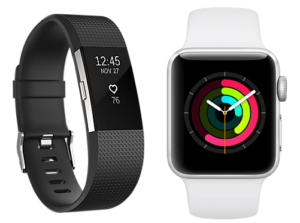 With the holidays around the corner, many people are in search of the perfect gift. A popular choice is the Fitbit and Apple Watch. However, those who are unsure may consider the pros and cons of both the Apple Watch and Fitbit.

The Apple Watch 6 and the Fitbit Versa 2 may seem identical at first however, both experience differences. Both of these watches have similar features but, with a closer look, one can find what is best fit for their lifestyle.
Battery Life
The Apple Watch 6 has a whopping 18 hours of battery life, which is perfect for day to day uses. The buyer can use this from the start through the end of their day, similar to an iPhone. Though, the Fitbit Versa 2 has 6+ days of battery life. Therefore, this watch can last through possibly a week without charge and can even track your sleep if you are interested in that effect.
Calls, Messages, and More
One of the biggest differences between the Fitbit Versa 2 (and all Fitbits) and the Apple Watch is the ability to receive text messages and calls. With the Apple Watch, the user can experience GPS, Cellular, and Xfinity attributes. The Apple Watch can connect the following carriers: Verizon, Sprint, At&t, T-Mobile, Appalachian, C Spire, Us Cellular, and Xfinity. This may be a deciding factor if one is choosing to use their watch in replacing on their cellphone or an addition.  Fitbit devices do not include these specific features.
Workout Options
The Fitbit Versa 2 has on-screen workouts, a health tracker, and has sleep tracking built-in. The Apple Watch Series 6 also has lots of workout options, fall detection, onboard EKG, and other health features. As a result, both of these gadgets perceive to have similar health tracking options, therefore, look further on Apple and Fitbit.
Prices
The Fitbit Versa 2 is sold at $173 on Amazon while the Apple Watch 5 series is sold from $299 at Best Buy.  Therefore, if one is on a budget or simply looking for a deal, many consider this.  The Fitbit Versa 2 is less than half the price of the Apple Watch Series 6.
More Pros of Apple Watch and Fitbit Versa
Those who choose the Apple Watch also have a significantly larger pool of apps to choose from. There are nearly 20,000 apps designed for the Apple Watch, whereas Fitbit’s App Gallery only has hundreds of apps. Whether you run, walk, swim, row, hike, or do yoga. The Apple Watch can track your exercise sessions and show stats. For most workouts that means showing you the time elapsed, distance traveled, pace, heart rate, and calories burned. The Fitbit tracks similar statistics in addition to, sleep, water/ food intake, weight, and menstrual health in the Fitbit app.
More Cons of Apple Watch and Fitbit Versa
While the Apple Watch requires an iPhone, Fitbit devices work nearly the same on both Android and iOS. The exception is that you’re unable to reply to text messages on your wrist if you’re using your Fitbit with an iPhone. The Apple Watch also has a “life” expectancy of only three years. The Fitbit brand has a life expectancy of only 2 years. One needs to purchase (free app) the Fitbit app to encounter their statistics, the Apple Watch has it both on the watch and on the iPhone.