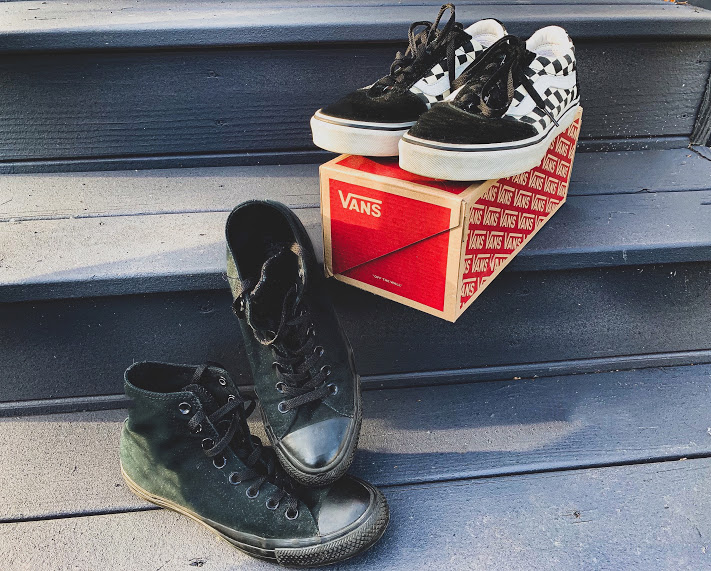 Due to their practicality and stylish appeal, buyers may be left wondering whether to buy Vans or Converse. You can't go wrong with either, but it's important to learn about both.

Originating in the early and mid 20th century, Converse and Vans shoes have been popular for decades. Although created for different reasons, both are in style and a practical shoe choice; which may leave you wondering which to buy this holiday season.
Origins
Opening for business in 1908, the Converse Rubber Company originally made rain boots. After seeing the rising popularity of basketball, they decided to use their rubber to make shoes for the sport. In the 1920s, they became the first company to mass-produce basketball shoes in the United States. After basketball player Charles H. Taylor joined the Converse sales force in 1921, sales skyrocketed. In 1932, Charles’ name, Chuck Taylor was added to the patch on the side of the shoe.

Almost 60 years after the creation of Converse, Vans was born in Anaheim, California in 1966. Skateboarders and BMX riders in Southern California were the target audience for Vans from the beginning. Taking off in the late 70s and early 80s, Vans became increasingly popular after being worn in the 1982 comedy Fast Times at Ridgemont High.
Converse Pros and Cons
Although Converse was originally made for basketball, they are rarely used for that anymore. Other companies such as Nike and Underarmour have made sneakers that perform better on the court. However, the classic shoe with the rubber toe is still fashionable and used as a leisure shoe. Nowadays, they come in an array of colors, both neutral and bold. When ordering online, you can even customize a pair to your liking, with free shipping for members. With high-top, low-rise, and even platform styles, they are a versatile shoe.

While Converse shoes sound appealing, they have some aspects that aren’t. The rubber toe and long sole often make your foot look narrow. In addition to that, after an adequate amount of use, the rubber toe begins to separate from the canvas, and the canvas may even rip in some areas. The thick sole in the shoes can make it difficult to form to your feet and may cause blisters. Podiatrists, doctors of the feet, advise against them. Dr. Leslie Campbell says that Converse is nothing more than a “glorified sock” and can lead to problems such as Plantar Fasciitis.
Vans Pros and Cons
Still being worn by skaters for their thin, flat soles, Van’s have shown to be both practical and stylish. Famous skater, Tony Hawk, has worn the brand since 1978, mesmerized by the brand’s signature waffle grip. Similar to Converse, Vans come in an assortment of colors and designs, and can be customizable. You can even own a pair for less than $100, as most range from $50-$75. Unlike Converse though, the shoes don’t make your foot look as narrow due to not having a rubber toe. The reason why skaters prefer Vans is because of their comfortable and padded soles.

Like Converse, Vans will rip after much use. Also, eventually, the rubber separates from the canvas, resulting in holes. Especially with new slip-on Vans, the backs of the shoes are prone to giving blisters. The flat soles of the shoes aren’t good for those with foot arch support issues either and may lead to similar problems related to Converse shoes.