Victrola vs. Audio Technica: The Turntables of Today 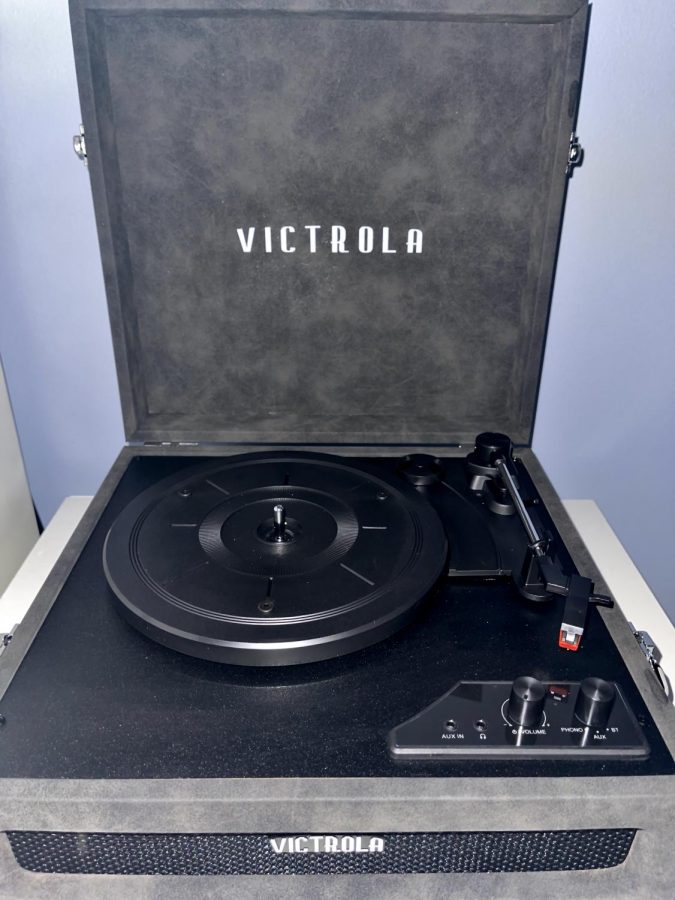 Turntables are making a huge comeback in today's day and age. The Victrola is one of the most popular turntable brands on the market.

Although created in 1877 and blowing up in the 60s, record players are making a comeback with teenagers today. With high demands for record players, it can be hard to choose between a high-end turntable or a more affordable option.

Victrola’s affordable suitcase turntables and Audio Technica’s high-end turntables are two of the most popular brands at the moment. For first time vinyl collectors, the choice between the two can be difficult.
Victrola Turntables Key Features:
Ranging between $59.99 to $99.99, the Victrola Bluetooth Turntable model VSS-890BT has all the needed features to play vinyl records efficiently. It can play vinyl records with speeds at 33 RPM, 45 RPM, and 78 RPM (revolutions per minute). It has built in speakers and a port for an aux cord. External speakers can be attached if they are compatible with an aux cord.

The Victrola also has a phono setting, meaning headphones can be directly plugged into the turntable. The biggest feature is that the turntable also works as a blue-tooth speaker, so a phone can be wirelessly connected and stream music.

It is made of simulated leather that comes in many color choices. The interior and the platter are plastic. It has a cue lever so the tonearm is easily placed anywhere on the vinyl.
Audio Technica Turntables Key Features:
The price range is between $249 to $299. The Audio Technica AT-LP120XBT-USB excels in the needs of a turntable, offering professional controls. It can also play vinyl records speeds at 33 RPM, 45 RPM, and 78 RPM, while creating a high fidelity home audio experience.

The Audio Technica is blue-tooth and offers USB and Analog Connections, as well as a phono setting for headphones. To amplify the sound quality of vinyl records, it has variable pitch control. The cool thing about this turntable is that it can be plugged into any Mac or PC to convert vinyl records into digital audio files through any converting software.

The outside has a clear plastic top with a metal base. The platter is aluminum with a felt mat that stops any echoing and resonance from occurring. It also comes with a cue lever, however it’s lockable so the tonearm can be secured in place.
Victrola vs. Audio Technica
While both turntables have blue-tooth connection, the speaker quality of the Audio Technica seems significantly better and smoother according to reviews. The tonearm from Audio Technica is balanced, while the one from Victrola is light and flimsy. This is a problem because if the tonearm isn’t weighted correctly, then there is a possibility for the needle to damage the vinyl records.

As for the platter, the Audio Technica’s aluminum design is much more durable and long lasting. For teenagers, the ability to stream vinyl records through their computers is a major advantage for Audio Technica since they can listen anywhere and without wi-fi.
My Opinion
As someone who owns the Victrola Bluetooth Turntable model VSS-890BT, I think it’s a pretty decent turntable. I learned how to use it fairly quickly because of it’s simplicity. The main issues I have are with the audio quality and the tonearm.

The tonearm is very flimsy and can be moved very easily, which has sometimes caused problems while setting it down on my vinyl records. Any slight hand jerk or shake can cause it to place wrong because it is very light.

As for the audio quality, it’s tolerable. It’s a bit staticky and has a very amplified bass, which sometimes can overpower the actual singing. However, for a blue-tooth speaker, it serves a much better audio quality than it does when using vinyl records.

It’s worth $99.99 since it does provide everything needed to play vinyl at a lower price, as noted in some reviews as well. It’s good to start out with, but after having it for over a year, I’m definitely upgrading to Audio Technica. It is a much better long term turntable that won’t risk damaging my vinyl records, and it’s a worthy investment.