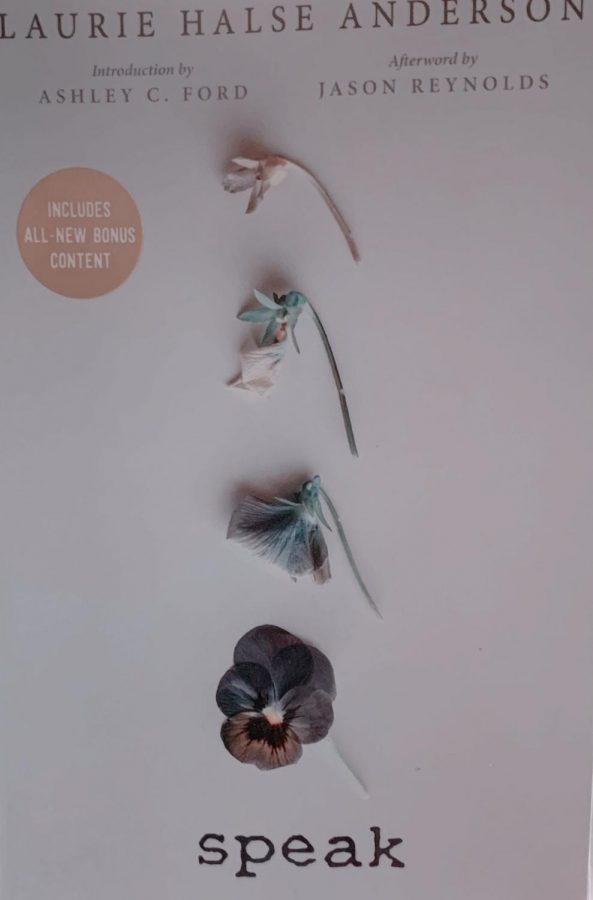 Speak is the emotions, heart, and struggles of a teenage girl, written by Laurie Halse Anderson. After its publish date in 1999, this novel has been experiencing an overload of positive reviews. Take a peek into a broken girl's life through her personal diary; the novel Speak a teenage must-read novel/movie.

Speak is the emotions, heart, and struggles of a teenage girl, written by Laurie Halse Anderson. After its publish date in 1999, this novel has been experiencing an overload of positive reviews. Take a peek into a broken girl’s life through her personal diary; the novel Speak a teenage must-read novel/movie.
Summary
Speak, is a teenager/ young adult novel that portrays the life of a high school freshman, Melinda Sordino. Melinda went from being a popular girl in middle school to becoming timid and nervous around her peers.  The summer prior to her freshman year, Melinda attended a party where a traumatic event occurred that changed her life for the worse. While beginning a new state of her life, she now has to deal with the judgments of her classmates, a guilty conscience, and a fearful tremor that eliminates her ability to speak.
Author Information
Laurie Halse Anderson is the New York Times bestselling author who writes for various ages. Readers acknowledge Anderson for taking tough subjects and tackling them with humor and sensitivity. Her work has earned numerous national and state awards, as well as international recognition. She attended Onondaga Community College for two years and transferred to Georgetown University in 1981. She graduated from there in 1984 with a B.S.L.L. in Languages and Linguistics.
Awards
Speak is one of the greatest books Anderson has written and much professional recognition has followed. To name a few, Speak was a 1999 National Book Award Finalist, 1999 BCCB Blue Ribbon Book, the 2001 New York Times Paperback Children’s Best Seller, and 2005 New York Times Paperback Children’s Best Seller. Furthermore, Anderson was also SCWI’s 2000 Golden Kite Award for Fiction winner, the 2000 Printz Honor book, the 2000 Top Ten Best Books for Young Adults, and has received many more awards regarding her novel Speak.
Critiques From Others
Emma Giordano from Goodreads  gave Speak 4 out of 5 stars because she felt it “is a really powerful novel that should be read by so many, especially teens.” She also states that the novelty teaches the reader to use their voice during rough times.

Elena, also from Goodreads,  rated Speak a 5 out of 5 for the meaningful lessons and how this book changed her life. She states, “A lesson worth reading and worth analyzing every little detail, no matter how the writing is and no matter how repetitive it can get.”

However, Jessica from Goodreads rates Speak a 2 out of 5. She believes that this book was a complete drag and wasn’t worth her time. She states, “But I do need my attention to be held, and this just didn’t capture it. It’s slow and Melinda is a very difficult person to connect with. ”
Review
After reading this book, I most definitely agree with the majority consensus. I think the book, is perfect for a young adult/ teenager, however, not suitable for children. The content might be confusing and interpreted differently by an immature reader. This book allows the reader to take what is given into their own context and relate it to their own lives. I really enjoyed this aspect because I feel it can connect to everyone and have a different effect on each reader.

Though, after reading other people’s critiques I can understand how they could have felt this book was boring. Speak is a novel that builds within itself. One must be willing to wait to the end in order to understand the full-circle effect. Therefore, if you enjoy action pact and consistent suspense in your readings, Speak may not be for you.

Speak is the emotions, heart, and struggles of a teenage girl, written by Laurie Halse Anderson. I recommend this book to all teenagers, more so girls rather than boys, however, the lesson is universal. The novel Speak a teenage must-read novel and is worth the suspense.

This book can be found on Barnes N’ Nobles, Amazon, and Audiobook.  There is also a movie based on the novel distributed by Showtine Networks Inc. and Hulu subscriptions.