One of Us is Lying: reviewing the mystery 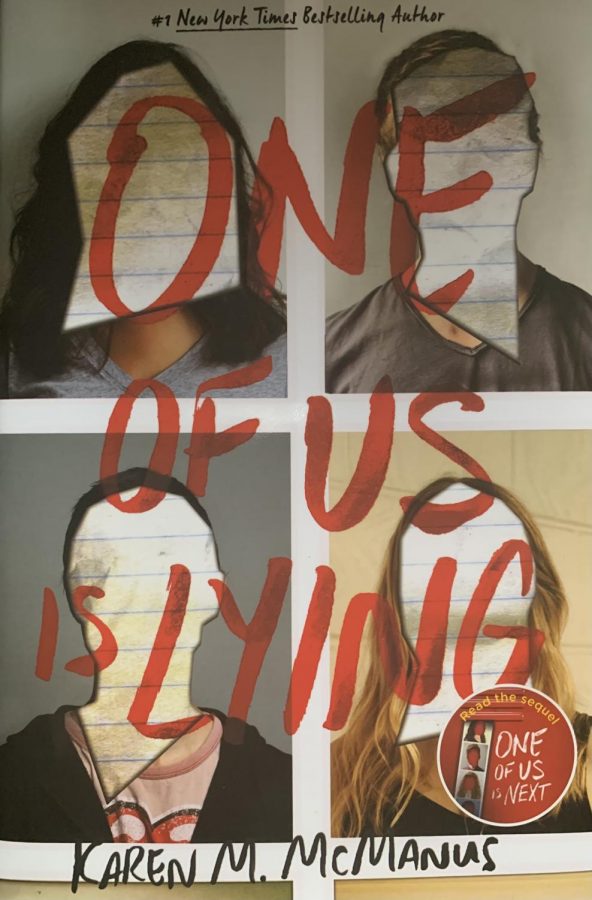 A New York Times Bestseller, One of Us is Lying is a masterpiece. It can almost be called the Breakfast Club with a dark spine-chilling twist.

Many young adult movies and books portray characters as stereotypical tropes such as “the jock” or “the princess.” This includes Karen M. McManus’ One of Us is Lying, but the plot suddenly takes a dark twist, and readers realize the characters are much deeper than the labels given to them by peers. McManus keeps the reader on their toes throughout the whole story. She appeals to the younger generation with her accurate portrayal of a high school setting and social construct.
One of Us is Lying Plot
The story itself revolves around a group of five students, all coming from different backgrounds. For the same suspicious reason, they’re all sentenced to detention on the same day. Going against school policy, they were all caught with cell phones. However, none of the phones actually belonged to the students. This led them to believe it was some sort of prank. Among the group is an outcast named Simon who’s only known for his app called ‘About That.’ He uses his platform to gossip about students at their high school, and even faculty members are aware of it. The town of Bayview is left wondering who’s to blame after he suffers from a fatal accident during detention. It’s then up to the group of students from that mysterious day in detention to figure it out before someone’s wrongfully blamed and secrets are released.

The students all initially appear to be stereotypical depictions of high school students, with characters such as Bronwyn Rojas, “the brain,” Cooper Clay, “the jock,” and Nate Macaulay, “the bad boy.” However, as the story progresses, we find out that they’re not who they seem to be. Each one of them has secrets and demons that they’re internally battling.
Enjoyable Aspects
Branded as a young adult mystery/suspense novel, McManus doesn’t hold back when describing scenes. Right down to what the characters are feeling, the narration shifts from person to the person explaining their point of view. Even during the detention early on, readers can feel a growing tension and, at times, the awkwardness between characters. She doesn’t hesitate to make it obvious that the 1985 John Hughes film The Breakfast Club, heavily influenced the main characters and the interactions between them. If you like classic young adult stories with a taste of danger, this is definitely for you.

The book features several themes, such as love, courage, and perseverance, and coming of age. I found it such an appealing read because of the many themes brought to the table. Colorful characters are an element that establishes early on in the novel. While readers may have initially thought them to be, we see up close and personal their true identities. The story shows growth and teamwork and grabs your attention at just the right moment. I would definitely recommend One of Us is Lying to someone looking for a new kind of “murder mystery.” Especially to teens, as many aspects of the story are relatable to that age group.