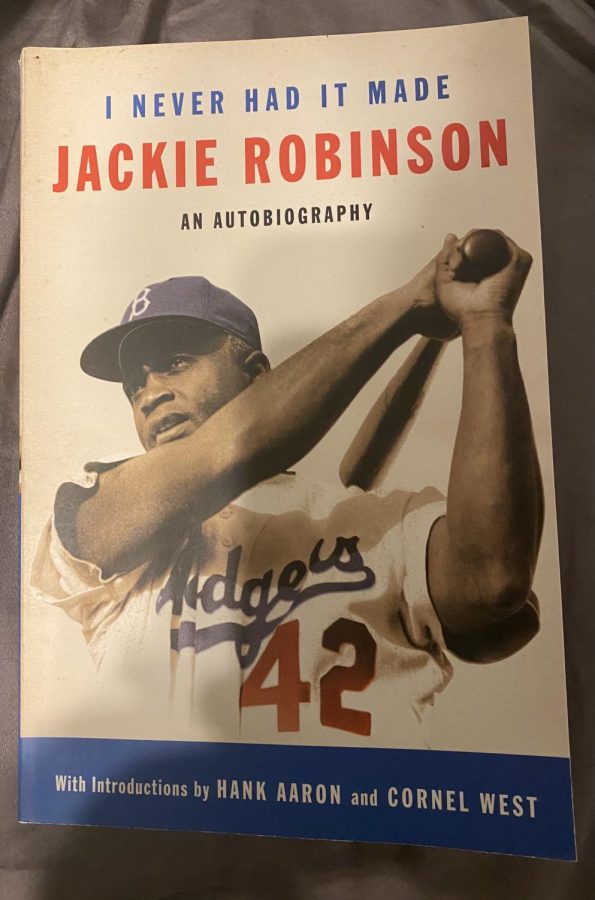 A baseball legend and a man that moved America in the right direction in the time of segregation, Jackie Robinson is a true hero and this book tells it all.

Introduction
I Never Had it Made is an autobiography of baseball legend Jackie Robinson. However, this is not a “baseball book”. It is not really about Robinson’s success in baseball but rather more of what he had to do to get into the MLB. In a white world that spat at the thought of a successful black baseball player, he had to overcome all odds from his upbringing to his retirement.

I Never Had it Made is co-written by Alfed Duckett. He contributed to speeches and sermons of Dr. Martin Luther King Jr. The autobiography won the Coretta Scott King Book Awards’ Author Award in 1973. It had heavy influence in the hit movie 42 that starred the late Chadwick Boseman.
Pre-Baseball Career
What I mostly enjoyed about the book was the first ten chapters. These chapters involved Robinson’s upbringing and career. When reading autobiographies, I’m always interested in how the figure grew up. This is because it’s usually a sign of what kind of person they will become.

Chapter one really dove into what Robinson had to deal with and his struggles growing up. For starters, his father left him and his family for one of their neighbors when he was a baby. A father, or father figure is in most cases very important to a boy because the father figure will teach him and become a role model. Robinson not having this was the first sign of being an underdog.

Due to the lack of income in his home, Robinson would steal out of necessity. The reader feels sympathy for Robinson because of everything he was dealing with as a child. Robinson wanted to help his mom out by getting a job, but she did not let him because her dream was for her children to go to school.
Baseball Career
What later chapters discussed was Robinson’s involvement in the army and how he would get found by Dodgers GM Branch Rickey. Although this was a slower part of the book, it was important because they were all stepping stones as to how he would be a star on the Brooklyn Dodgers. Robinson would play baseball in the army and would then play in an all-black league.

It was not until 1944 that Robinson signed with the Brooklyn Dodgers. To me, this was the most intriguing part of the book. The section details the conversation between Robinson and Dodgers General Manager Branch Rickey before Robinson would get signed to the Dodgers’ top farm team. As the reader, if this was not included in the book, there would be so much emotion left out and the story would not pick up at all. But with the inclusion of it, I was getting shivers down my spine.
No Fighting
There was a quote that really stuck out to me during one of these conversations. Branch Rickey exploded in Jackie Robinson’s face and said “Robinson, I’m looking for a ballplayer with guts enough not to fight back.” This was when Robinson was concerned about getting attacked by racist white players on the other team. The fact that Robinson would not be able to fight back built his character as one of the mentally strongest people in baseball history.

More importantly, what if Robinson did fight back? I believe that the course of baseball would be changed, as the league would be reluctant to let black players shine if they would “cause” violence in the game, even if it was justified.

Robinson kept his word- no fighting. There was an instance where he was cleated by an opposing player sliding into second base.

He took it. He did not fight.

When signed to the Dodgers, he was not liked by his own teammates. All the sacrifices made was just a small price to pay for the future of sports. What this book does is that it builds Robinson’s character and his mental toughness through his pain and is a recurring theme in it. Rightfully so, and it tells the reader just the man he was.
Post-Baseball Career
This is where the book starts to slow down after some great stories told by Robinson. When the Dodgers traded Robinson to the Giants, Robinson refused to play another game and decided to retire. One of the better parts of this section, it showed that Robinson was a true Dodger at nothing else. Branch Rickey and the Dodgers were the only ones to give him a chance in a white baseball league, so why should he go to another team? This stubbornness of Jackie Robinson was told the right way and I don’t think it could have been done any better.
Conclusion
This book would be great for high school students. Although it can be a slow, hard read at times, especially after his baseball career, it is worth reading. It teaches lessons that include to not judge others by the color of their skin. Sadly, it still must taught today.

Looking back into what happened in 2020 and already 2021- it seems like we are regressing instead of progressing in terms of civil rights. In order to progress, we MUST learn from our past or it will just repeat itself. Reading I Never Had it Made would certainly help our progression as a country. It teaches the reader how society was in times of segregation- something that we sometimes forget. Comparing this to what is happening now will open the eyes of people and make them realize that we are indeed going in the wrong direction.

Hopefully, one day skin color won’t matter. But that cannot happen until we learn. I would recommend anyone starting from 9th grade to read this book  because it teaches many lessons. Additionally, it shows how terrible our past really was. I Never Had it Made was a great book and I don’t have many complaints to mention.