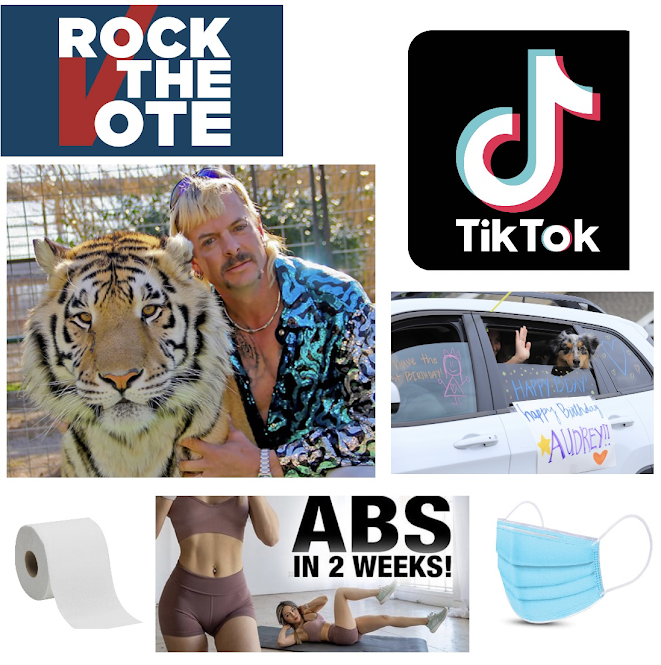 Photo via The Declaration Newspaper

2020 brought us a bunch of different trends, some online and some not

2020 was a year of many new trends. Being stuck at home for so long made a lot of people bored, which means a bunch of new trends to try.
#1 – TikTok
Even though TikTok has been around since 2018, this year was definitely the rise of the app. During quarantine, many downloaded TikTok and tried out the many features it has. It brought many different dance trends to  new and old songs. TikTok has also brought attention to many different issues throughout the year. It has become a news source for a lot of teenagers, being that some of the biggest news networks are now reporting on TikTok.
#2 – Online Workouts
With gyms being closed for months due to the pandemic, many people had to find alternative workouts to take part in. One popular fitness youtuber that helped many stay fit during quarantine was Chloe Ting. Many teens, and adults, took place in her different workout videos and it helped them keep moving during quarantine.
#3 – Online Shopping
Online shopping has been around for awhile. However, this year, due to the pandemic, it was used more than usual. Not only did people use online shopping for retail, but it was also used for groceries. Those who are high-risk, elderly, or wanted to stay home throughout the pandemic have chosen to get their essentials delivered right to their door.
#4 – Netflix Originals
2020 was a year of a lot of television watching, and Netflix gave us a lot of new series’. One of the most popular series was “Tiger King”. This was watched by people all over the world, reaching 64 million accounts worldwide. Netflix also released series’ like “Outerbanks”, “The Crown”, “Bridgerton”, “Cobra Kai” and many more. Some of these series’ have been around before 2020, but have either released a new season this year or just became popular this year.
#5 – Drive-by Birthday Parties
Being that we could not celebrate in large gatherings for birthday parties this year, we had to brainstorm different ideas to celebrate. Drive by birthday parties happened to celebrate a birthday safely during the pandemic. Many people participated in these all over the world, and it was a great alternative to a birthday party.
#6 – Toilet Paper
In the beginning of the pandemic, toilet paper was something you could not find in any store you went to. Even though it’s something you would never thought you’d be without, it was being sold out everywhere.  People wanted to stock up because they did not want to go outside, but this is a trend that was never expected.
#7 – Rocking the Vote
2020 was an election year and voting, of course, is important in any election. “Rock the Vote” is a slogan to encourage eligible voters around the country to go out and vote. Celebrities like Lizzo, Beyonce, Bella Hadid, and more all urged citizens to go out and vote.
#8 – Among Us
Among Us became very popular in the fall months of 2020. This game was played by children, teens, and adults, and was also used for different activities. Although the game’s initial release was in 2018, this year  the app really soared.
#9 – Home Improvements
Being stuck at home brought many people to want to change certain aspects of their homes. Whether it was a new paint job, new furniture, outside work, or simply just moving things around, people were partaking in these improvements a lot this year.
#10 – Masks
Masks may be more of a safety precaution, but they were definitely important this year. Not only were we introduced to medical masks, but a lot of popular stores started selling their own masks. This, like toilet paper, was a trend that was unexpected but happened in 2020.

Even though this year was a lot different than others, it brought new things that kept us occupied. What was your favorite trend of 2020?