To All the Boys P.S. I Still Love You 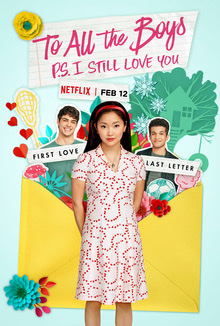 Photo Via Wikipedia under the Creative Commons License

With the third installment just released, it is recommended to watch the first two movies before heading to this third one.

The Netflix original movie, To All the Boys P.S. I Still Love You was based on a high romance between main characters Lara Jean and Peter Kavinsky. In the first film of the series, they fall in love with each other while pretending to date. Now the second movie is based on the aftermath of them falling in love and facing many conflicts.
Summary
The movie is about a girl, Lara Jean and her high school drama. She volunteers at a nursing home, and works with one of the boys she wrote a love letter to. While have conflicts with her boyfriend, she seems to get close to this boy and starts to have mixed emotions. She was faced with problems and questions on which boy, she truly loved. At the end of the film, she realized who she truly loved and that all these conflicts helped her realize her feelings. This movie is based on Lara Jean’s perspective and have you questioning who she will pick at the end.

This is the second movie that is a part of the series To All the Boys. This is a continuation from the drama and clip hanger from the first movie. This movie answer the questions that most viewers have but also leave them having more questions.  Also, the movie series is based off of the novel series To All the Boys by Jenny Han.
Review/Expectations
The second movie came out in February 2020, and many teenagers couldn’t wait until the film came out. I was one of those people but I felt a little disappointed with what the film held. The trailer was misleading and gave me high hopes with what’s going to be on the film. Not only was I disappointed in this mislead but also the contact of the film.

Although I feel like the film overall could have been better, there were some scenes I felt were enjoyable. There were scene that made me laugh, and heartbreaking drama but it was kinda predictable. It did have a great story line a ending, all the fans loved.

I’m hoping that when the third film comes out, To All the Boys Always and Forever, on February 12th 2021, it will be way better. I feel like watchers aren’t as excited to watch the film because of displeasure they had with the second film. I’m holding little hope that the third movie will be good like the first movie but there’s no telling what will happen.