The Little Things was a poorly directed crime thriller 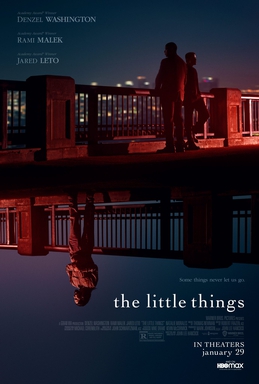 As of today, The Little Things has a 47% on Rotten Tomatoes. Most of the film's negative reviews comes from its weak writing.

As awards season comes to a conclusion, voters are selecting between a handful of 2020 to early 2021 films. Although the majority of theaters were closed throughout the year, many studios released their most critically acclaimed movies on streaming.

One major contender for this year’s awards season was The Little Things. As soon as I noticed the cast, I was intrigued. Denzel Washington, Rami Malek, and Jared Leto were in the film as main characters. Jared Leto was also nominated for Best Supporting Actor for his work in this film at the Golden Globes.

The Little Things is a crime thriller directed by John Lee Hancock. Hancock famously directed Saving Mr. Banks and The Blind Side. The film is also available on HBO Max for a limited time. The Little Things follows Deputy Sheriff Deke Deacon (Washington) who teams up with Sgt. Jimmy Baxter (Malek) to search for a serial killer roaming Los Angeles. As their search continues, Baxter deals with Deacon’s past trauma that can affect them forever.
Weak Direction
Unfortunately, The Little Things is a lackluster film that had so much going for it. Ultimately, the thriller suffers from a weak direction. You never know where the movie is heading. Some of the film seems like a classic take on “don’t judge a book by its cover” and some it talks about police brutality and mental health. It never establishes itself smoothly, as the film suffers from trying to tell one theme to another.

As a result, the characters seem quite shallow and viewers are left confused. It’s incredibly convoluted and its writing is weak too. The Little Things builds up Deacon as a depressed sheriff and Baxter as a cocky sergeant, but we never go deeper into their characters. The film tries to, but it’s so focused on accomplishing everything else at once.

Unfortunately, the last twenty minutes of this film were incredibly disappointing. As I thought the movie was starting to come together, it just doesn’t. It leaves you incredibly confused and not in a good way. The Little Things has twists and turns that just confuse its audience. Some of the characters’ motives don’t make sense from a filmmaking perspective. In fact, how can I even consider this a mystery if nothing is ever really resolved?
Jared Leto
One aspect of the film I enjoyed was Jared Leto’s performance. Leto killed it as prime suspect Albert Sparma. He’s an incredibly gifted actor and his performance gave me thrills throughout. His character could’ve been a great commentary on mental health accusations, but that failed.
Final Thoughts
If you’re into thrillers and want to check out some of the latest awards films, I would recommend The Little Things. If not, I would skip it or stream it on HBO Max. This movie isn’t worth watching in theaters.