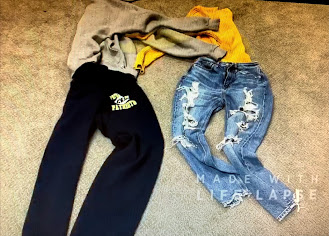 Are you less inclined to even wear jeans these days? Well you aren't alone even though some research suggests that your performance is related to how you dress.

By: Jackie Poznanski and Alexa Leviten

Some people have always preferred to dress up whereas others have always preferred to be comfortable. But before the pandemic we knew there were moments when we had to “dress up.” But, during quaratine many people wore holes in their comfiest clothes figuring who is really seeing me if I’m not leaving the house. Some professionals on zoom calls wore nicer shirts or blouses on top but left the sweatpants or pajamas on the bottom.

According to NPR, retail clothing sales and accessories in the US is down 79% due to the pandemic. The article also noted that “Preppy fashion store J.Crew and luxury department store Neiman Marcus became the first two major retailers to declare bankruptcy during the pandemic, tipping over from their preexisting debt. Others are likely to follow, including the suburban-mall staple J.C. Penney.” With retail clothing stores closing, filing for bankrupcy or simply hanging on by a thread, economist wonder how many companies will survive.

Retail maybe plagued by this pandemic for years to come if things don’t change soon. In an article from April of 2020, Forbes Magazine said, “There are already signs of changing consumer habits in new research. A whopping 87% of U.S. shoppers prefer to shop in stores with “touchless or robust self-checkout options”, according to a survey sponsored by store automation company Shekel.”

Even as retail stores begin to adapt to the changing times, we need to consider if people will want to “dress up” anymore after being comfy and casual for nearly a year. These retail stores survival comes down to the consumer but the consumer needs a reason to buy new clothes. With restaurants starting to open up more in the US, will consumers start to buy new clothes as people finally start to leave their houses? As corporate America slowly begins to return to their offices and students begin to return to their classrooms, will people want a change out of their casual clothes? Will comfy casual replace business casual?

In the article below, two Declaration editors pick sides in this fashion war: one supports the casual cause while the other feels dressing up can bolster positive vibes.