Correlation between feminism and intersectionality 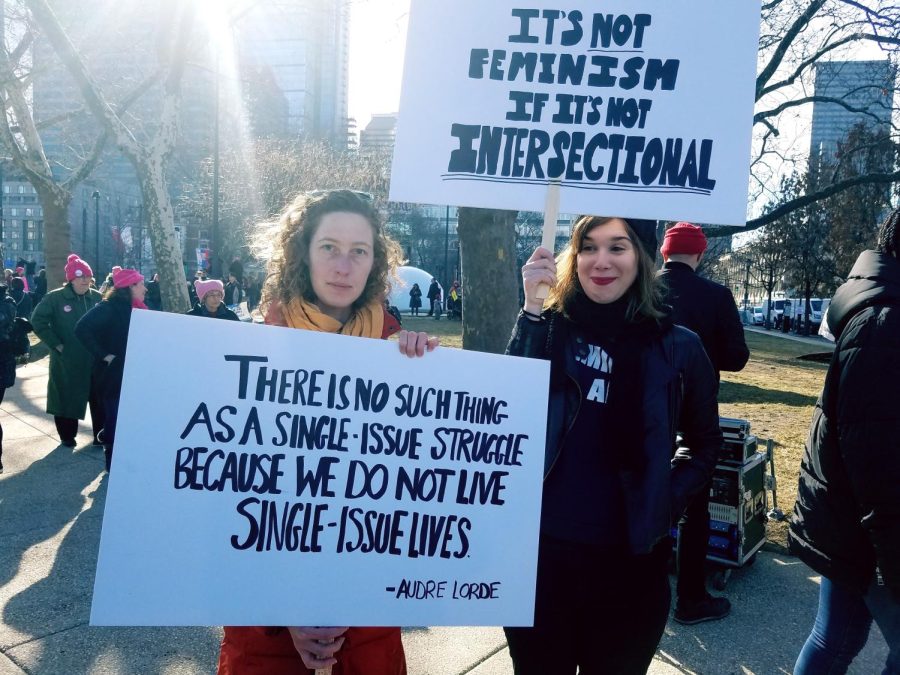 Holding up posters, the women express their concern for including all in feminism.

What’s intersectionality?
According to the Oxford Dictionary, intersectionality is defined as “The interconnected nature of social categorizations such as race, class, and gender, regarded as creating overlapping and interdependent systems of discrimination or disadvantage; a theoretical approach based on such a premise.”
Where did it first come from?
The term was coined by Professor Kimberlé in her paper “Demarginalizing The Intersection Of Race And Sex: A Black Feminist Critique Of Antidiscrimination Doctrine, Feminist Theory And Antiracist Politics.”

It was later added into the Oxford Dictionary in 2015.
Mainstream Feminism
Mainstream feminism is typically the issue that is widely popular in the media.

Some examples are “Free the Nip” or body positivity content, although these are important topics to talk about, the media overlooks issues like poverty, access to proper healthcare, etc. It is curated to a population where they do not have to worry about these things.

Overall it turns a blind eye to other prevalent issues that should be more mainstream in the media as well. It does not include cultural factors like race, class, gender, sexuality, etc. which is essential to feminism. All of these factors have an effect on a women’s experience in life.

Take the example of the Equal Pay movement. The movement spreads awareness about the unequal pay between men and women, but it does not bring up the unequal pay between women from different races. While women, in general, do get paid less than men in general, there is also a gap in pay between women of different backgrounds.
How is mainstream feminism dangerous?
Mainstream feminism can be dangerous as the content is catered and is represented by middle-class, white women. Often correlated with mainstream feminism is white feminism. According to Dictionary.com, white feminism is “the label given to feminist efforts and actions that uplift white women but that exclude or otherwise fail to address issues faced by minority groups, especially women of color and LGBTQ+ women.”

For example, the push that hijabs, burqas, and niqabs are oppressive towards Muslim women is a representation of white feminism. White feminism believes that Muslim women are “forced” to wear it when it is not. It is a choice for many Muslim women.

The belief that this is oppressive towards Muslim women is dangerous and a bill approved in France proves that. According to Aljazeera, France senators approve of the bill prohibiting minors from having any conspicuous religious sign and any dress or clothing which would signify inferiority of women over men. Prohibiting women from doing anything is an act against the ideology of women’s liberation. The assumption of women being oppressed when they are not can lead to further dangers to the lives of these women and many others in differing situations.
Recognizing white feminism and how to move forward
Now ask yourself, is your feminism inclusive? Does it fight for all women regardless of race, sexuality, religion, or socio-economic background?

It is crucial to understand how race, sexuality, socio-economic background, etc. have an impact on feminism. It allows us to see beyond the horizons of mainstream media and look at serious issues impacting women from different backgrounds. Being able to fight for all women will also bring more awareness to issues that are less talked of.
How does intersectionality correlate with feminism and its importance?
This is where intersectionality comes into play. Intersectionality must be recognized in feminism when speaking out on the issues women face. Feminism must include the fight for the struggles that EVERY woman faces. It is important for feminism to be intersectional because it understands that when it comes to discrimination and inequality, all women are treated differently. It understands that there are factors that contribute to the degree to which women face inequality or discrimination.