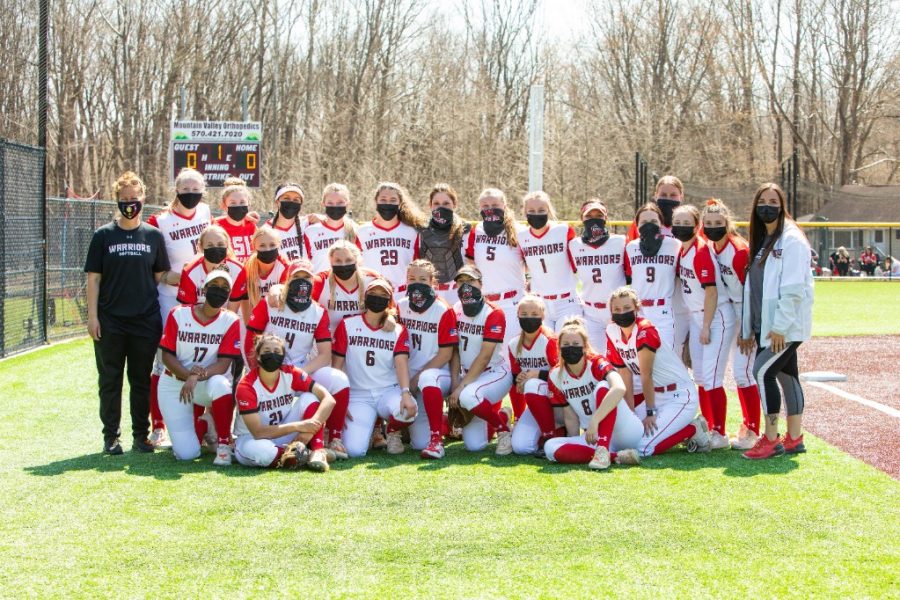 Pictured above is the East Stroudsburg University softball team following a sweep of Felician University. Coach Jaime Wolbach and her team were very ecstatic over the sweep.

Playing college sports: the ultimate goal of approximately eight million high school student-athletes in the United States. Alyssa Castera is a sophomore outfielder for the East Stroudsburg University softball team. She was able to make her dream come true with much hard work and dedication. She has much to say to potential athletes looking to play college softball.
Early beginnings
Castera began playing travel softball in the 12U division for the Matawan Huskies, previously playing recreationally. She then moved on from the Huskies to the Carteret Kraze, and then the NJ Firecrackers until she got to college. This is a very similar start to many high school softball players looking to play at the next level in New Jersey. Freshman pitcher for Colonia High School’s softball team, Megan DaCunha, is one of those players and can learn a lot from role models such as Castera. 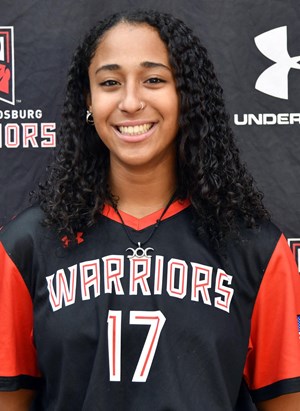 Recruiting process
Castera’s biggest piece of advice to high schoolers is to start looking early into what division you would like to play (division l, ll,lll). Equally as important is to email coaches before tournaments. In the email should be information about yourself, your position, and what you like about their school. The emails shouldn’t be generalized, and each one should be personal. Attending college camps is another way to stand out to college coaches.

According to Castera, it’s a great way to “get college coaches’ attention and show them that you are interested in attending that certain school!”

DaCunha’s biggest question for Castera would be if you should pick a college based on their softball team or what you’re majoring in? Castera notes that looking into a school for both softball and academics is very important to find a school that’s perfect for you.
Standing out
Standing out to college coaches can be hard, especially when thousands of other kids can be emailing them at a time. To stand out to them, Castera recommends just being yourself! Show your best qualities, and show off a quality that you can bring to the team that they may be lacking. She also says that being a student comes first. This means that performing well academically is just as important as on the field.

Potential college athletes should contact coaches early into their high school career, according to Castera. Athletes can’t fully contact coaches until the beginning of their junior year. However, by contacting them beforehand, they can come to watch your games and see you play. Also, attending camps is another way to be seen, and can help build a relationship with the coaches.

Currently, DaCunha is working as hard as she can on her hitting skills and her different pitches.

However, she says, “I fully intends on emailing college coaches as soon as possible.”

She aims to find a school for her without letting her young age deter her from her goals.
Being a student-athlete
Especially in college, the term “student-athlete” can be a scary label. A lot of pressure is put on student-athletes to do well athletically and academically. You must balance a morning lift, classes, practices, and games. This can take a lot of scheduling and running around, according to Castera. But after getting the hang of it, it’s not as difficult as one might think. College sports aren’t too different in comparison to high school. However, the competition can be bigger, stronger, and older. So, it’s important to work harder and focus, Castera suggests. DaCunha, although somewhat intimidated by the concept, believes she can easily adapt to college life as an athlete. She looks forward to traveling to different places and playing for different teams once she starts playing college softball.

In college, Castera notes that you must become very independent.

She says, “You’ll be living on your own and can choose to attend class and study halls. You’ll have to make decisions without the guidance of your parents. This is an exciting journey but can be scary at first.”

Also adding that being a student-athlete is like having two full-time jobs.

Although playing college sports can be alarming, it has its upsides. Castera’s favorite part is game days. Traveling to different schools and playing the game she loves is what makes all the hard work worth it for her. This is something DaCunha can’t wait for as well. Castera loves representing her university on her chest and she wouldn’t trade it for the world.

Castera also attributes making friends to playing college softball. She considers her teammate’s as family. They are always there to help her when needed and have helped her considerably throughout the pandemic and with the struggles of online school.

Given the ups and downs of being a collegiate athlete, the rewards outweigh the risks for Castera. Her most memorable moment was when she played her first game in college. She received the start in left field and was excited to play against Lafayette University. Seeing her parents in the crowd watching her play was incredible. At that moment, she knew that all the late nights and early mornings were worth it. DaCunha aspires to one day in a few short years be in Castera’s cleats playing college softball.