To jet ski or not to jet ski? That’s the question.

A shared experience about the adrenaline rush of jet-skiing for the first time. 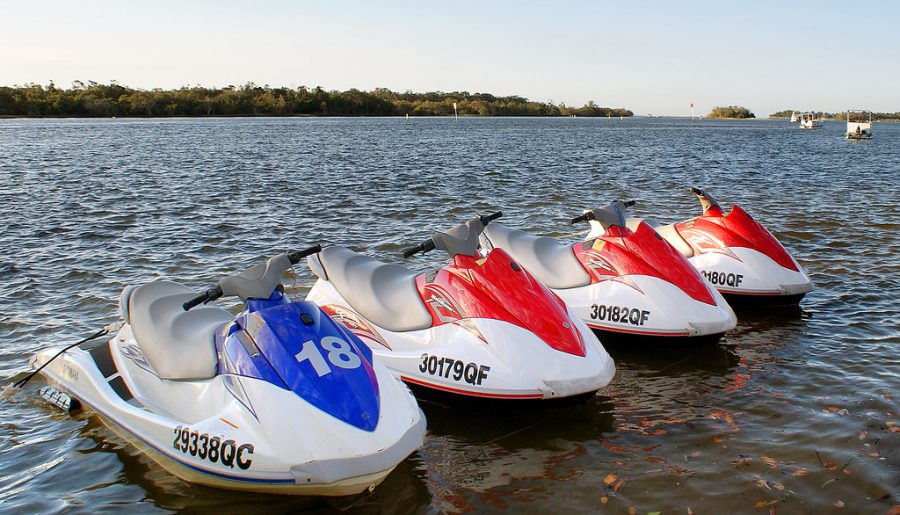 Photo from Flikr under the Creative Commons License

Jet-skiing can be a fun activity to do during the summer. It can be done in lakes, waterways, rivers, and the ocean, however in order to operate one you need a permit

Jet-skiing is an activity that is fun for the entire family. It certainly evokes memories of long, warm summer days.  Whether you rent a jet ski for an ocean ride or any other kind of waterway, jet-skiing gives you excitement and gets your adrenaline going.

At least it’s supposed to do that.
What I knew about Jet-Skiing
My parents always told me stories of their time on Marco Island, Florida, when they went jet-skiing. They were thrilled to get so close to dolphins! Every time they rented jet skis their experience was unforgettable.

However, what happens when you have such a horrible experience that you become traumatized? Well, that’s exactly what happened to me when I was about 10 years old. I will forever remember Myrtle Beach’s Intracoastal Waterway in South Carolina with chills going through my entire body.
At First
It was a beautiful day, as always, in North Myrtle Beach. My parents decided to take a drive and rent a jet ski for the three of us since I had never been on a jet ski. I was very excited to embark on this new adventure, that’s for sure.

We were given life jackets and were told what to do in case of an emergency. Meanwhile, my mom was worried and couldn’t stop thinking about the brain eating bacteria that everybody was talking about that summer. She got nose clips and ear plugs for all of us so that no water would get inside our noses and ears – we should avoid talking – that was her plan (it didn’t last long).

All of us got on the jet ski and off we went through the intracoastal waterway. My father was driving the jet ski and I was between the two of them. We started off by going very slowly but then once the signs were green, we sped up a bit – not too much – just a bit. Well, that was enough for my mom and I to start panicking.
And the Terror Began
We started moving too much and my father was forced to slow down to almost a complete stop because we were moving too much. The wobbling got worse because as boats and jet skis went by, the waves made our jet ski shift from side to side even more. I thought that we would end up in the water for sure!

My heart was racing and all I wanted to do was to turn around and get on land again. My mother too – her heart was beating quite fast and she began asking my father to turn around.

Turn around – easier said than done with a jet ski for three people and a waterway with quite a bit of water traffic. Making that turn seemed like an eternity. I kept envisioning the three of us falling into that dark, horrific water.

My father kept telling us to calm down but I was having a panic attack in the middle of a waterway with no solid ground nearby. Slowly, my mom and I calmed down, and the water did too. We were able to peacefully go up the waterway about two times- I said no more after that.

My father turned around and we were finally safe on land. I remember my legs shaking so much out of fear and I wanted to cry a little.

Reflection
I haven’t been jet-skiing since and I don’t plan to. Although I have tried my hardest to repress this memory, the feeling of the jet ski tipping over still haunts me to this day. This might be where I got my fear of getting on anything that floats above water, with the exception of a pool float.

I know jet-skiing is something that many people do enjoy, I just didn’t get so lucky with it. Maybe jet skis are bad luck to me. To be honest, I’d rather not find out what happens if I go on another one.

Do I recommend others to try it? Absolutely! It’s just not for me, and as they say, you’ll never know until you try.