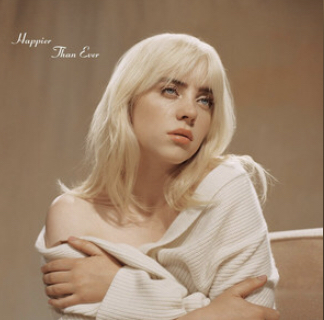 With her tour dates in mind, Billie Eilish will be playing in New York's Citi Field in September at the Gonernors Ball Music Festival along with Post Malone.

With the musical return of young pop star Billie Eilish, her fans and the media have been craving some news, and Eilish did not disappoint.
So It Begins
After her success at the Grammy’s and her surprising hair-facade that had her fanbase completely shaken, the teasing began. The newfound blonde posted on her Instagram on April 19th, captioning “Things are coming.” And, after the few singles came out within the time span of 2019 and 2020, this was certainly news for everyone.

With that, Eilish never gave the media a break. After posting small snippet videos with mysterious captions and story teases, the fans started to become restless for an answer. I can only imagine that Eilish enjoyed seeing her fans in the dark, because what she had coming was truly a surprise to everyone.
Happier Than Ever
On April 27th, Eilish came out with the big reveal—Her new album “Happier than Ever,” was set to release on July 30th. This being the first album she’s announced since 2019, so chaos was set lose throughout media platforms that I can only assume it basically broke the internet. She explained in her caption that it was “Her favorite thing she has created,” and that “She has never had so much love for a project than she does this one.” It definitely set the standards for a new and possibly personal best upcoming album, and everyone was excited.
Your Power
Oh, but that wasn’t all. Within a week, EIlish not only released a new single, but was set for the cover of Vogue Magazine. First off, her single “Your Power,” is referring to forms and types of abuse in a relationship. The powerful ballad contributes to movements across the globe. Combining her own experiences with others’ lives, she creates a picture for all men and women to see the harsh reality. In itself, it’s a slow, guitar led song that drips through your ears and into your soul. It’s truly outstanding, and it’s impossible to feel nothing when listening.
“It’s All About What Makes You Feel Good.”
As for Eilish’s beautiful Vogue appearance, she stands regally In one photo dressed in a custom trench coat and corset made by Burberry, plus boots, gloves, and jewelry by Mugler, Thomasine Gloves, and Anita Ko Jewelry. Others also include custom made clothing by Alexander McQueen, Atsuko Kudo Latex, and more. In the article, Eilish speaks out on growing up in the industry, her experiences with body positivity and the backlash that comes with it, and feminism. She gives her opinions on the patriarchal and societal views of beauty and their standards. Eilish says that it doesn’t matter—It’s not about what they think of you, It’s about what makes you feel good in your own skin and nothing else matters. And I couldn’t agree more.

In domestic terms, once again Billie Eilish has taken the music industry by the reigns and leads it down her path. She is an absolute fire that no one can resist, and continues to be nothing but the best. Kudos to her, and all of her hard work.