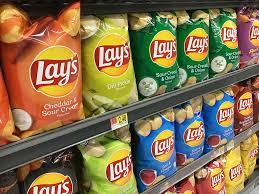 Lays chip brand is always coming up with new interesting flavors for their potato chips so we can have more flavors than the classic potato chips. Although some of these flavors are questionable, most taste exactly like the name of the flavor. I recently tried four flavors of potato chips Lays has created, and I wasn’t really a big fan.
Dill Pickle Flavor
The Dill Pickle chips taste exactly like a pickle. In the beginning when you first start eating the chip, they taste like salt and vinegar chips but right at the end you can taste the pickle flavor. I highly recommend these chips to people who love pickles because of how similar the chips taste to a pickle. Since I do not like pickles I didn’t like the chips at all. I like the flavor of salt and vinegar but overall not the taste of dill pickle. I would rate this two out of five stars. The only reason I rate this so low is because I don’t like the taste of pickles, but I highly recommend these chips to people that like the taste of pickles.
Chile Limon Flavor
The Chile limon chips was my least favorite. I hated the taste of lime towards the end of the chips and I feel like this ruin the chips. In the beginning, there’s a little spicy taste but then it transferred to a lemon and lime taste at the end. I did enjoy the spicy taste in the beginning but did like the chips towards the end. I did like the smell of the chips because it smelled like BBQ potato chips. Overall, I give this flavor a one out of five. I really did not like these chips, because of the off and gross taste of the lime.
Jerk Chicken Flavor
The jerk chicken chips threw me off. I was very hesitant to try these chips. This flavor to me was the oddest one I seen in the stores. After trying the chips I realized that it tastes exactly like chicken. The taste weirded me out because it was a potato chip that tasted just like chicken. I didn’t really like the taste of the jerk chicken, because the taste weirded me out. I don’t like the idea that a chip tastes like chicken. I give this flavor a three out of five, because it was an okay taste. I expected this flavor to be gross, but it was better than I thought.
Summer BLT
Although the sound of a chip tasting like BLT, this was actually my favorite flavor out of all of the four flavors I tried. The smell reminded me of summer because it gave a BBQ scent. It also gave a scent of bacon which appealed me more. The tastes resembles the tastes of BBQ chips but this one had more flavoring to it. I would rate this flavor a four out of five. I like the variety of flavoring the chips had and although it didn’t taste like BLT, it still had good BBQ-like flavoring.