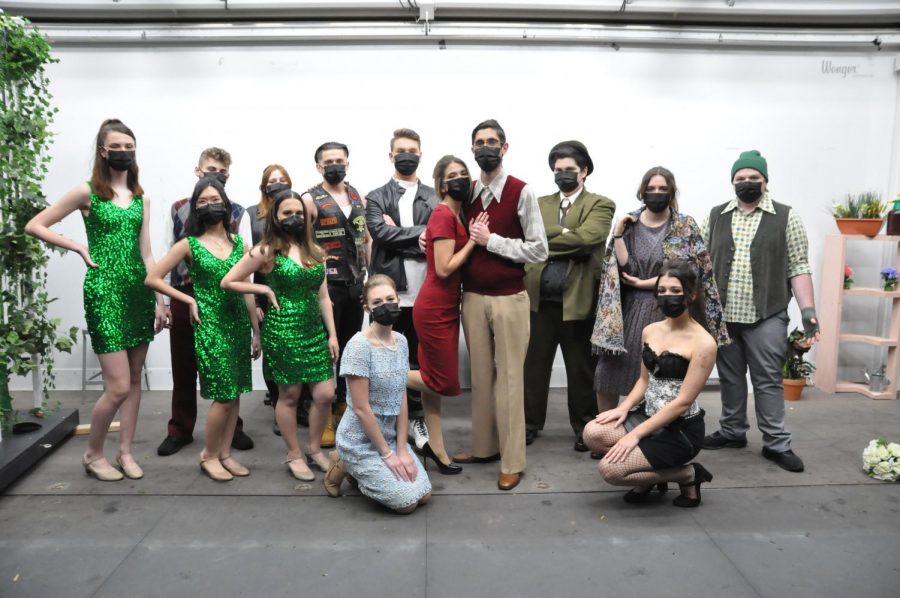 Photo use with permission from Mr. Benson

After waiting over 400 days for opening night to happen, the cast of Little Shop of Horrors took to the outdoor stage under the stars.

There were two years of rehearsing and a year of not knowing whether they will be able to perform or not. Eventually however, the Musical Theater of Colonia High School presented The Little Shops of Horror.

On October 2, 2003, the musical first made its Broadway debut. The musical was adapted from the 1986 film, The Little Shops of Horror.  It was directed by Connie Grappo.

The Musical is centered around this strange plant found by Seymour Krelborn, played by Daniel Dias, who is an assistant at a flower shop. Seymour can’t seem to figure out why the plant was not flourishing after being fed a variety of things. One day, Seymour pricks his finger and starts to bleed. This is when Seymour figures out that the only way the plant can thrive is by human blood. Also, he figures out the plant is able to talk.
What changed?
For the first time ever, Colonia High School’s musical production was held outside.

The whole set was moved outside. According to Ms. Plakto, director of the musical, due to the lack of funds, they were unable to rent the plant puppets and large-scale props that they had originally planned.
What were some of the challenges the musical faced?
Due to some restrictions and rules, there needed to be a few adjustments when it came to staging and singing. The cast was not able to be on stage until a week before the show when the outdoor stage was delivered.

Thankfully there were no seniors from last year’s play, so there were no changes in the cast. Since the cast has been working on the musical since last year everyone already knew the music, dialogue, and most of the dances.

Due to the flexibility of the cast, crew, pit, and production staff it was easier to solve many of the issues the production faced. The hard work of all the staff helped tremendously.

Facing the difficulties
The cast, crew, pit, and production team were faced with many obstacles. However, they were still able to put on the show. The hard work was shown well when watching the musical. The passion and drive everyone had made the musical possible.

To the cast and crew, Ms. Plakto expresses, “This cast knows (probably because I told them every chance I got) how proud I am of all the hard work they put into this process. They knew it wouldn’t be easy but they trusted me to take them through it and ultimately they had an amazing show. It is one that will have a special place in my heart because these performers put their heart and soul into accomplishing the impossible – performing live theater in the midst of a pandemic.”