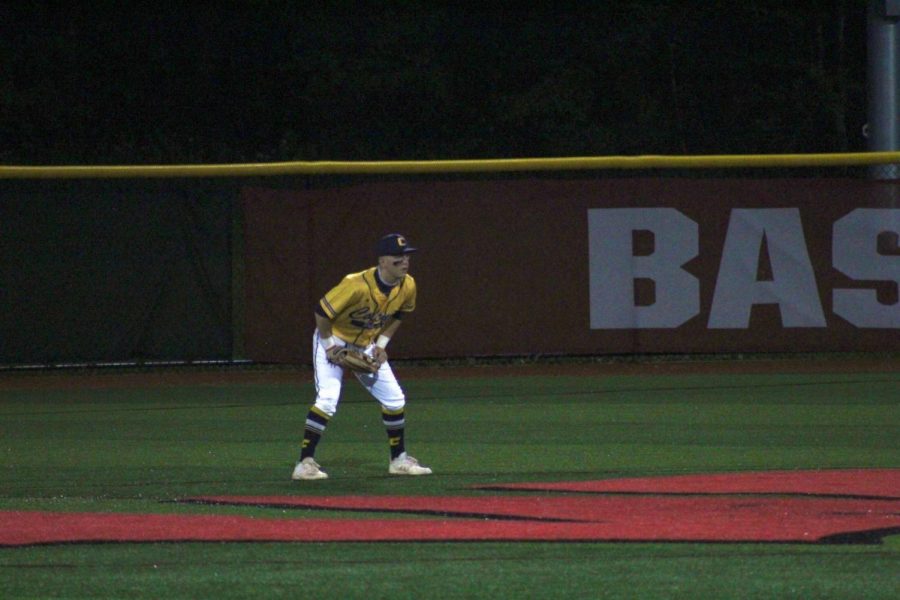 photo via sophia wintonick with permission

This years graduating class features 5 baseball players. One of them is outfielder Harrison Brindley

This years senior class features 5 baseball players. These players are Harrison Brindley, Jimmy Hopke, Jack Celebrano, Victor Perosi and Chris Waldron. Each of these players were asked to reflect on their career.
Harrison Brindley
Firstly, Harrison Brindley is an center fielder and pitcher. In addition, he played baseball all 4 years. When asked if he has any regrets Brindley says “I regret absolutely nothing. whether I was playing well or slumping, I left my everything on the field from start to finish.I took pride in hustling and being a good teammate. Those traits to me are more important than the outcome of games, I’ll take what I’ve learned from coaches and teammates on with me forever and that is something I wouldn’t trade for the world.” Brindley is truly greatful for the opportunity he’s been given.
Jimmy Hopke
Jimmy Hopke is a first baseman and third baseman. He played baseball for all 4 years. Hopke’s final message was “I would like to say that if you are willing to work you get results,as I worked to get better after struggling my sophomore year and I took it seriously and I got a lot better thanks to my coach.” Hopke was able to overcome struggles in his sophomore year to become a very productive hitter during his senior season. Losing a season of expierence has not stopped Hopke from improving his game.
Jack Celebrano
Jack Celebrano is an outfielder and pitcher. He played baseball for all 4 years. Celebrano was asked if he had any regrets about his career. He said “I don’t have any regrets I feel I always gave it everything I had when I was given the chance.”  Celebrano put in a lot of hard work for the Colonia high school baseball program and he is proud of what that hard work has gotten him.
Victor Perosi
Victor Perosi is a 2nd baseman and left fielder. He transferred from St. Thomas Aquinas to Colonia during his senior year. He was immediately welcomed into the Colonia family by his teammates. When asked why he decided to play baseball in the first place Perosi said “I grew up around baseball my whole life. All of my family played and we were big Yankee fans so I was obligated to play and turned out being my favorite sport.” Baseball is something that links many families together. That seems to be the case for Perosi.
Chris Waldron
Chris Waldron is a shortstop. He played baseball all 4 years. His final message was “I’m super thankful that my baseball career went the way it did. Couldn’t ask for a better group of guys to go through this time of my life with.” Waldron is very thankful for his time in baseball as a whole. Above all however, he is very thankful for all the teammates and coaches he’s had over the years who have taught him so much. The friends you make and the lessons you learn often stay in your memory far longer than the result of the game itself.
Final message
All of these guys have put in a lot hard work into baseball. No matter where life takes them from here the lessons they’ve learned through baseball has them prepared for the future. One can only wish good luck to these players.

photo via coach Scialfo with permission