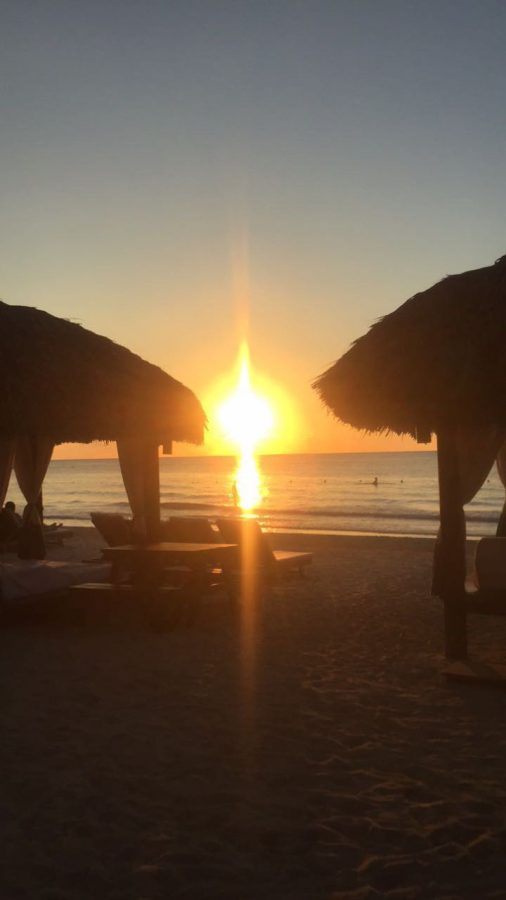 The sunset (taken in Negril, Jamaica), is one of the best parts of visiting the island. Alongside the crystal-clear waters and the beautiful palm trees, the Jamaican sunset is truly amazing.

My introduction to the Caribbean
About 5 years ago, I took my second trip to the Caribbean. My first trip was to the Dominican Republic, which was bittersweet. I stayed at the Dreams Resort and Spa in Punta Cana, and the property was beautiful. It was an all-inclusive resort with its own beach. My 11-year-old self was downing the virgin strawberry daiquiris and Pina Coladas while basking in the sun. The downside of Punta Cana was the quality of the water. My whole family (myself included) wound up getting sick due to the poor water quality. Other than that, the property was very nice. It included watersports and a child-care center (in case if adults wanted a night out).

It’s safe to say that my first experience in the Caribbean was a good one. However, my second dance with paradise blew it out of the water. This would primarily be because of the amazing, passionate people that loved seeing guests coming through the resort entrance. Additionally, the number of things to do in Jamaica is endless. The unique excursions will make sure you fall in love with your vacation. These two points and more will be expanded upon in my first ever (of five total) trips to the island.
The plane ride to Jamaica
I was in seventh grade, and like any other middle school student, I could not wait for Fall Break to start.  Two months of school was already enough for me. It was planned that my family and I were going to Beaches Ocho Rios, Jamaica, and I was a little skeptical, as I wasn’t a fan of leaving the country. I must say, I was intrigued by the way my parents describe the trip. They claimed that it was going to be a paradise with free food and drinks, and being the chubby kid I was at the time, I was all in. It was also brought to my attention that there would be a waterpark, multiple pools, a variety of restaurants (another thing that brought my interest), an Xbox room, as well as a teen’s lounge. Although I was skeptical at first, now I was all in.

So, it was the day of our departure. My family and I drive to Newark Liberty International Airport in Newark, New Jersey in the early morning. The flight went well, smoothly, and as good as a four-hour flight could get (I slept for most of the time). The interesting part came when I landed at Montego Bay Airport. As soon as we got off the plane, you were able to feel the Jamaican heat. The airport was of decent size, but what was the second-worst part of the trip was the wait in customs. My family wound up waiting two hours in customs, only being cooled off by a few fans that were stationed in the queue. After that drag was over, we got our luggage and moved on the rest of our trip.
Trip to the Resort
The next step of our journey was waiting for our bus- so it was a nice little break from traveling. We were able to wait in a lounge that had drinks free of charge while waiting for our shuttle. This was the first sign that we’re in a paradise. A staff member gladly took our bags and asked where we were going, and from there we didn’t have to worry about our baggage at all. Once the bus arrived, we had our driver greet us and another staff member take our bags to the bus. It was a small airport shuttle bus that looked more like a van, but the aesthetic of the vehicle was the least of our worries.

The trip to our resort was four hours. Yes, four long hours, which was equivalent to the plane ride from New Jersey to Montego Bay. Not to mention, the drivers in Jamaica are very, well, sketchy. Besides them driving on the left side of the road, Jamaican drivers would make stops right before a stoplight or a few feet in from the car in front of them. In addition to that, you would also see the military with what seemed to be assault rifles, as Jamaica is not safe outside of large cities and resort properties. Once again, I slept for half of the drive, like any other 13 years old would do on a long drive. 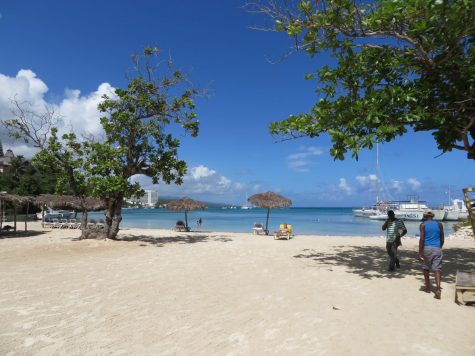 Our introduction to Beaches Ocho Rios
After the four-hour drive, we finally arrived at our resort- Beaches Ocho Rios, Ocho Rios, JA. Employees greeted us with smiles and hot towels to wipe ourselves off with. The employees took our bags, as they assured us at the airport, our baggage wouldn’t be a problem. After greeting us, we were taken to the main lobby, where we had more people greet us and tell us about the resort and give us a tour.

As soon as my parents were done signing e-contracts presented on a tablet (I had no idea what it consisted of), we went up to our room. The room was nice, with the only downside being that it didn’t comfortably sleep all four people in my family. The room had two double beds, which my family insisted couldn’t fit all of us. So, we requested a cot for my brother, and I slept on the pullout couch. Perhaps that was a bad idea, for at this point my brother was a little over six feet tall. His legs were comically hanging off the bed.
How my family spent their days
My family took the first day to rest, after a long day of traveling. The next day we hit the beach and got our tan on. The beach was private so we didn’t have any natives coming onto the beach and trying to sell us items, so that was a positive. The only natives that were allowed to come onto the resort were approved by the resort themselves, and they were only allowed to stay in one small area. The vendor sold a bunch of handmade items, ranging from jewelry to wooden sculptures of sharks and drums. They were only allowed to stay on the resort for a certain amount of time, and they were gone before sundown.

After the beach, we went to the waterpark, which was so much fun. The waterpark consisted of a kiddie area and the main waterpark. This had two slides that required tubes, and another that was a body-only slide. The body-only slide, colored red and green, is special because it is known for a viral video that can be seen here. In the video, a lifeguard is seen gliding across the pool to the end of it, which is truly awesome to witness. I remember attempting this, but it is simply impossible to do this at such a great level without years of practice.

My favorite activity
Most of my days were made of alternating between the main pool, the waterpark, and the beach. One of my favorite activities to do there was playing pool volleyball with others at the main pool. I don’t mean to brag, but I was a great server for a seventh-grader. When I served, I put heat on that ball every time and the serve would be like a line drive, so it would always be hard to hit. I would even build a level of prestige at the resort, as when I visited again in 2019, people would call me “Boston Heat” (they thought I was from Boston because of a time I wore a Red Sox shirt to the pool).
The people
Without a doubt, the best part of visiting Jamaica would be the people. Everywhere I went I was greeted by the smiles of the people and a great, positive attitude. Another thing with Jamaicans was that they had a bubbly personality, which made me feel welcome. What made the people even more memorable was that they had their own nicknames. For example, the employee that ran the teen’s club was “Tom Cruz” since he would always go on adventures with his teens. Another one was “The Colonel,” a bartender that promised that his specialty “Fried Chicken” drink was “Finger-licking good” (don’t worry, there was no chicken in the drink- it was just a name!).

One of the employees my family actually became good friends with and we chat from time to time. When we would go to Jamaica, we would see this particular employee. We would always get the chance to have a nice dinner with him at an on-property restaurant.
The food
Speaking of the restaurants, Beaches had a good variety of restaurants with a diversity of themes. From what I can remember, I know there were Italian, French, Mediterranean, Barbeque, as well as a buffet that had a different cultural theme each night. The food was pretty good, portions were reasonable, and each restaurant offered a three-course meal.

In my opinion, the Italian place, or the Venetian, was the best restaurant. They had a great carbonara, and I believe there was a steak they offered that I also enjoyed. The Venetian also had a pumpkin soup at their appetizers bar (it offered soups, salads, pieces of bread, cheeses, etc.). I was suspicious of the pumpkin soup, but it was one of the best things I had on the resort, and it’s something that I crave every here and there.
Key takeaways
Jamaica was easily the best vacation destination I have ever visited. The trip there was a little rough, but as soon as I got to the lounge at the airport, the amazing resort employees took care of me. The resort itself was modern, and the private beach was a great plus. The waterpark offered something for me to do while my parents were at the beach, getting their tan on. What topped everything off was the food, which left me satisfied after each meal.

Obviously, I was, and still am, I fan of Jamaica. I absolutely loved it there, and so did my family. We would go onto visit four more times, up to November 2020. Now, I provide a call to action. If you have the capital for a vacation, consider going to Jamaica. Their economy relies on tourism, and as of 2019, 34.7% of their GDP relies on it. Knowing this, you have the ability to lift Jamaica’s economy up, as they have been suffering due to COVID-19. I promise, if you stay at a resort-like Beaches Ocho Rios, you won’t be disappointed!