“Sour” by Olivia Rodrigo has finally arrived, it couldn’t be more sweet 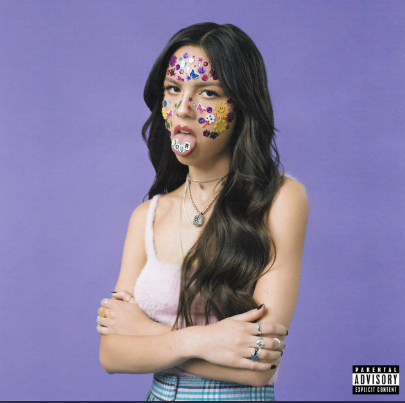 May 21st, being a popular release date for multiple artists, happened to be one of the best for one in particular. Record-Breaking Olivia Rodrigo takes first with a sweep after releasing her debut album–Sour.
Drivers License
Rodrigo has been a topic on this news site before, as we reviewed the internet drama that surrounded and clouded her career after releasing her single “drivers license.” But, when pushing all that aside, “drivers license” itself exceeded expectations and basically paved the way for Rodrigo’s road to stardom. The song debuted at number one on the Billboard Hot 100, and quickly became the most streamed song in one day on Spotify four days after its release. With over 15 million streams on January 11th, 2021, Rodrigo’s career took off–and it wasn’t coming down any time soon.
Next Big Hits
After letting the crowds for “drivers license” settle, Rodrigo planned to release once more. She waited for her timing to be perfect, and on April 1st, 2021, “deja vu” was her next big hit. This retro-copycat themed single quickly climbed the billboard charts after debuting at number 8, unlike her next single “good 4 u” which released a little over a month later, on May 14th, 2021. This one, in comparison two her second single, was more so called by a rocker heartbreak-ish teen anthem. It’s angry, it’s angst-y, the kind of song that will make you want to scream…which resonated perfectly within her fanbase, and rapidly became insanely popular within its first few days of release.

And then, finally, on May 21st, 2021, “Sour” arrived.
SOUR
Rodrigo was one of many artists to announce a music release on this date, partnering with artists such as Twenty One Pilots and BTS (Twenty One Pilots with “Scaled and Icy,” and BTS with “Butter”). But, once again, the incoming star topped everyone with an album that debuted at number one, and broke records for the singles that starred on the album itself.
Where To Start
Now, I’ve been sitting at my computer for about two hours. I’m thinking “how on Earth do I put “Sour” into words, if there are no words to describe it?”

“Sour,” a record-smashing, brain-rattling, heartbreak anthem, is possibly one of the best albums of this year thus far according to the media. It was a debut that almost everyone on the planet was looking forward to, and what we received was better than anything we could have imagined. The album is a mixture of melancholy piano ballads with an angry and guilted twist, and the climb of getting into a place of acceptance and using it to reach out to those who surround you.

With all eleven songs scattered in an order that goes from desolated and quietly upset to downright grinded and messy, it’s possibly the perfect combination. A memorized collection of songs by GenZ that dominated the music industry and has it in its prime. All in all, a wonderful and gritty album that resonates with her crowd and others in a blissful way.
What Comes Next?
In the end, Rodrigo is only getting started. With the amount of success her debut album gifted her with, who knows what’s in this artist’s future? She’s shown the world her combative styles of music–grinding and lowly despondent, yet hopeful and guiding the way to the light. So what else does Rodrigo have in store for us? Who knows, really. All I know is that with Rodrigo’s current success as a musician, it can only continuously go upward from its current state of stardom.