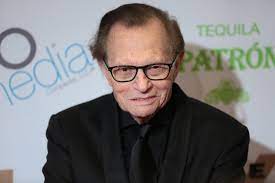 One of the most influential talk show hosts of all time, Larry King will go down as a television legend.

Larry King was born on November 19, 1933, in Brooklyn, New York to Edward Zeiger and Jennie Gitlitz. King was a successful radio and television host who’s known for his iconic interviews. The television personality hosted over 50,000 interviews and won two Peabody awards, an Emmy, and ten Cable ACE Awards. King died on January 21, 2021.

King had a total of seven wives. Larry married Julie Alexander, Sharon Lepore, Alene Akins, Mickey Sutphin, Annette Kay, Freda Miller, and Shawn Engemann.
Rise to Stardom
King gained recognition in 1978 as host of The Larry King Show. He was also known for his interviews on CNN from 1985 to 2010. Recently, King hosted Larry King Now from 2012 to 2020, which could be found on Hulu, Ora TV, and RT America.

King was born in Brooklyn, NYC, and was one of two children. His parents were Orthodox Jews who immigrated to the United States from Belarus in the 1930s. He attended Lafayette High School in Brooklyn.

King’s loss of motivation struck once his father died. After high school, King desired to work in radio communications. He wanted to stay in New York for a while to support his widowed mother.
Talk Show Legend
King was able to find work as a disc jockey in South Florida. He began interviewing random people in 1960 while writing for a couple of Miami newspapers. In 1971, he was arrested for allegedly stealing money from a friend. Fortunately, his charges were dropped, but he was unable to find work in television and writing.

King reached success on CNN in 1995 with Larry King Live. The legendary talk show host’s show was a platform for many presidential candidates. Ross Perot announced his presidential run on the show in 1992. King also interviewed figures like Donald Trump, Hillary Clinton, and Vladimir Putin.