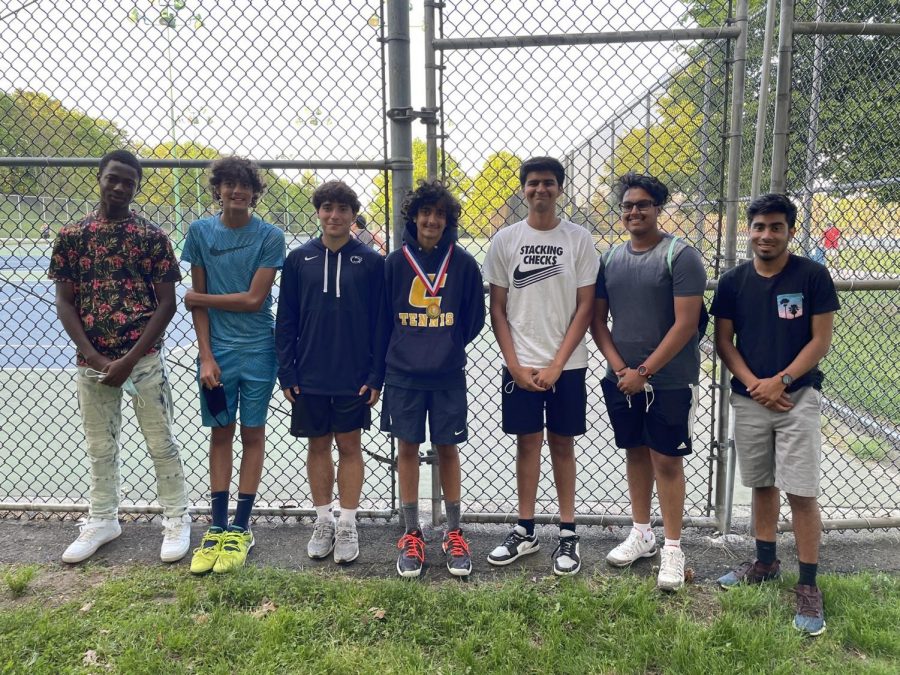 with permission from Mr. Finnigan

Due to COVID-19, the 2020-2021 tennis season was delayed. CHS tennis had to overcome an abundance of obstacles, but in the end, still managed to have an undefeated season.

This has been the most challenging and odd school year that students, and even teachers, have been through yet. It can even go back to last year when COVID-19 started. Schools went all-virtual, having no idea what to do during the pandemic.

Fortunately, the 2020-2021 school year started. Schools have a better idea of how to handle learning while also being safe. Eventually, students and staff would be back in the schools, getting a sense of normalcy.
COVID changes the season landscape
One aspect of normalcy that came back was the return of school sports. Baseball, basketball, football, and hockey all returned, but it is often that one particular sport gets lost in that conversation- tennis. This year, the Colonia High School tennis team has been quite the story. Despite a late start to their season, was the program to watch in terms of Colonia sports. The team would go undefeated in the regular season and win their division championship, a great feat, especially when starting the season late. When talking to the team’s coach, Mr. Brian Finnegan, he noted that there were numerous obstacles during the season, COVID and non-COVID related.

When asked about the difficulties the pandemic caused during the season, Finnegan explained: “[There was] a later start to the season, approximately 3 weeks, so it condensed everything. We were limited in the amount of time we had to practice and set up our lineup prior to the start of matches. We had no scheduled scrimmages. And then when league play started, we essentially played 5 days a week. All of this and recruitment for new players was difficult, we were fortunate to have a lot of returning players compared to other teams, and we were rusty with the fact that our 2020 season was canceled due to the pandemic.”

Surely, COVID-19 disrupted the team’s mojo, but that did not stop them from doing a sensational job during their season. The team also went through a condensed preparation period and a lot of uncertainty, but through the determination that the players had, they were able to fight through these difficulties the pandemic caused.
Importance of seniors

A specific group of players that had a great amount of determination had to be the team’s seniors. Due to the pandemic, they missed out on their season junior year, and knew they had something to prove in their last year of high school. The seniors were going to play their hearts out, and they did. They were a core part of the team, and they were the reason why the team stuck so well and were able to make such a fantastic season. Not only did the seniors play an essential role in the tennis team going undefeated, but in doing so, showed the underclassmen that they must also overcome obstacles that are thrown at them in order to be as successful as possible. Coach Finnegan highlighted the importance of the seniors when asked how their departure would impact the future of the program, saying:

The seniors, Todd Sherman, Tyler Struben, and Arya Shah, were the core of our varsity team from the moment they arrived as freshmen. They love the game, they wanted to improve and were willing to do the things it takes to make leaps in your ability on the court to do so. That work culminated in an undefeated, division-winning effort. We will miss them dearly on and off the court. Their impact on CHS Tennis will be felt for seasons to come.

The seniors of the CHS Boy’s Tennis Team should be extremely proud of themselves. The team had two years of separation, but they still came together to revive the chemistry the team previously had. Additionally, the seniors dodged senioritis and kept their grades up in order to keep their role on the team; something that is difficult, especially for all-virtual students whose rhythms got disrupted due to the new method of learning.
Coach’s call to action
Coach Finnegan would love the continued support of the CHS Boys and Girls Tennis teams. He said, “Colonia has phenomenal tennis players who walk our CHS hallways today and for seasons to come. We need more youngsters who want to learn the game and represent Colonia. Get a racquet and some friends and come hit on our beautiful courts. My seniors did just that as 8th graders and now they are division winners today.”